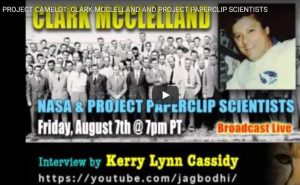 This is another amazing interview with Clark McClelland, NASA engineer and technical assistant on the Apollo missions. He talks about an incoming planetary body, or STAR being towed along behind what he calls a DYSON SPHERE containing a race of beings… Possibly from Aldebaran and headed into our solar system. He talks at length about Wernher von Braun, the fact that the beings from Aldebaran are here and have been here working in our space program and supplying advanced technology to the Germans during WWII… He again refers to the nine foot tall humanoid being spotted on the space shuttle via close circuit camera giving our astronauts orders using hand motions… and he is backed up in his testimony, by at least 2 other NASA employees.

He also talks about inner Earth and what really happened to Hitler. This is great stuff.

Go here to read about Clark’s background, his work on the Apollo programs and other space shuttle missions. This link will take you to the chapter we are discussing …Chapter 28 from the Book “Stargate Chronicles”: My Association with German Scientists at Cape Canaveral and Kennedy Space Center – By Clark C. M Clelland http://www.stargate-chronicles.com/web/ Please help support Clark’s important work: http://www.stargate-chronicles.com/si…