BZ: Remember I mentioned many things unfolding on the 24th of October… So much more is being conveyed in this on camera discussion than just what seems to be at first pass. And some of the military Trump refers to as knowing, but really well… are non locals ;- ) 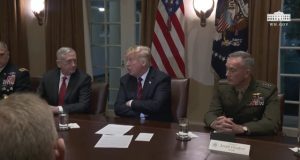 Tonight President Trump dined with military leaders in the Cabinet Room. The president answered a few questions from the media at the beginning of the briefing.

Lieutenant General Joseph Kellogg, Assistant to the President and National Security Advisor to the Vice President;

The Honorable Mira Ricardel, Assistant to the President and Deputy National Security Advisor;

General Mark Milley, USA, Chief of Staff of the Army;