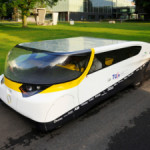 The electric sedans of the future will also generate their own photovoltaic power.

That’s the philosophy behind a new class of competition in this year’sWorld Solar Challenge.

Since 1987, the challenge has had solar-powered cars racing across the parched Australian outback every couple years. But the solar-powered vehicles that have competed in the challenge, while exciting and innovative, have been anything but consumer-friendly. They have typically carried only an uncomfortable driver in a craft shaped like a sheet of aluminum foil precariously perched over three wheels.

This year’s challenge, scheduled for October, will push teams to go even further. The new Michelin cruiser class has been created for vehicles that could conceivably be marketed as family sedans. Ten teams have entered, and they will compete against each other for points awarded based on such criteria as practicality, attractiveness, and energy consumption.

On Thursday, one of the those teams unveiled its entry, taking a car it dubbed Stella to cordoned-off Dutch streets to strut its photovoltaic stuff. And it’s pretty as a pug.

The team of 22 Eindhoven University of Technology students behind Stella has vowed to register the car for on-road use, helping to demonstrate its potential commercial viability. From a press release:

‘Stella’ is the first ‘energy-positive car’ with room for four people, a trunk, intuitive steering and a range of 600 kilometers.

By combining aerodynamic design with lightweight materials like carbon and aluminum, a very fuel-efficient car has been designed, which also has ingenious applications like a LED strip and touchscreen that make all the buttons and knobs we know today superfluous. Intuitive driving is enabled by a steering wheel that expands or contracts when you are driving too fast or too slowly. STE will have the car officially certified for road use to prove that this really is a fully-fledged car. 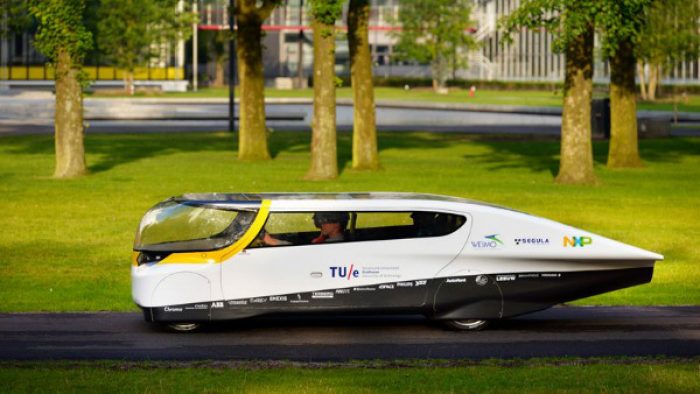