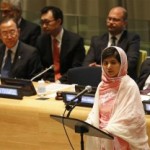 In a speech at the United Nations on her 16th birthday, Malala Yousafzai, who was shot in the head by the Taliban less than a year ago, for promoting education for girls in Pakistan, called on world leaders to provide “free, compulsory education” for every child.

“Let us pick up our books and our pens,” Ms. Yousafzai told young leadersfrom 100 countries at the United Nations Youth Assembly in New York. “They are our most powerful weapons. One child, one teacher, one book, and one pen can change the world. Education is the only solution.” 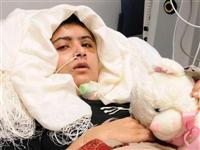 Ms. Yousafzai, noting that she was proud to be wearing a shawl that had once belonged to Benazir Bhutto, spoke in a calm, self-assured voice as she delivered her first major speech since she was shot on the left side of her head Oct. 9 on her way home from school in Pakistan’s Swat Valley.

In her speech, she recalled how the attackers had also shot her friends. “They thought that the bullets would silence us,” she said, “but they failed.”

“And then, out of that silence came thousands of voices. The terrorists thought that they would change our aims and stop our ambitions but nothing changed in my life except this: Weakness, fear and hopelessness died. Strength, power and courage was born. I am the same Malala. My ambitions are the same. My hopes are the same. My dreams are the same.” – Malala Yousafzai

Malala was greeted by U.N. Secretary General Ban Ki-moon of South Korea. He introduced her to the youth assembly. “By targeting Malala, extremists showed what they feared the most: a girl with a book,” Mr. Ki-moon said. “Malala is calling on us to keep our promises — invest in young people and put education first.”

Gordon Brown, the former British prime minister and now United Nations special envoy for global education, also introduced Ms. Yousafzai and helped organize what was being called the Malala Day event at the U.N. On Twitter, thousands of people shared updates about the speech with the hashtag #malaladay.

“THE DAY OF EVERY WOMAN”

But Ms. Yousafzai stressed in her speech that it was “not my day” but “the day of every woman, every boy and girl who have raised their voices for their rights.” 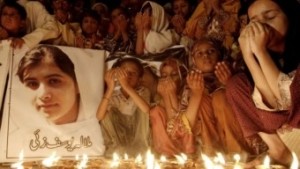 “Thousands of people have been killed by the terrorists and millions have been injured,” she said. “I am just one of them. So here I stand, one girl among many. I speak not for myself but for those without voice.”

She also emphasized that she had no desire for revenge against the Taliban or any other terrorist group. She included the Rev. Dr. Martin Luther King Jr., Nelson Mandela, Gandhi and Mother Teresa as among the leaders who have inspired her.

She said she wanted education for every child, including the “sons and daughters of the Taliban” and terrorists.

“I do not even hate the Talib who shot me,” Ms. Yousafzai said. “Even if there was a gun in my hand and he was in front of me, I would not shoot him.”

She attributed her nonviolence philosophy and ability to forgive from lessons “learned from my father and my mother.”

On Friday, Ms. Yousafzai and her supporters also formally unveiled The Malala Fund, a non-profit organization that raises money and distributes grants to support education for girls.

And as Mashable reported, her father worked with a Grammy-award winning producer to put together a music video called, I am Malala, with three young artists and more than 30 choir singers from around the world. It was released on Wednesday.

To learn more about Malala and her fund to help educate others click here. 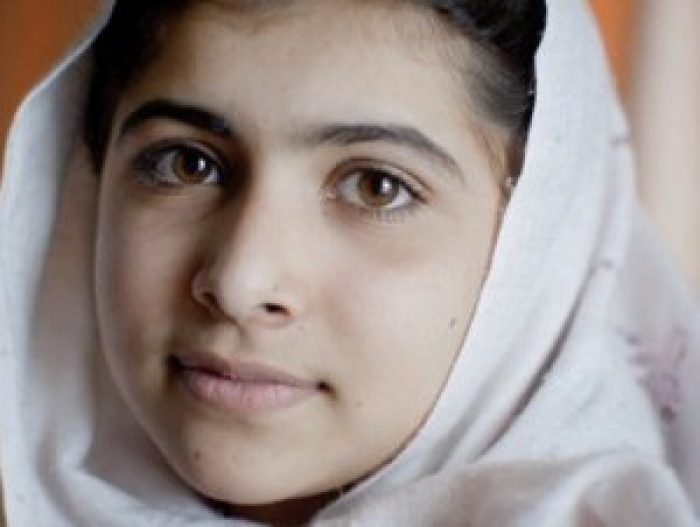