Kids Pedal Their Own Bus to School

Dutch Kids Pedal Their Own Bus To School

In the Netherlands, bikes abound. And now, they even take kids to school. Behold, the bicycle school bus.

The Dutch are bicycle fanatics. Almost half of daily travel in the Netherlands is by bicycle, while the country’s bike fleet comfortably outnumbers its 16 million people. Devotees of the national obsession have taken the next logical step by launching what is likely the first bicycle school bus.

Built by Tolkamp Metaalspecials, and sold by the De Cafe Racer company, the bicycle school bus (BCO in Dutch) is powered entirely by children and the one adult driver (although there is an electric motor for tough hills). Its simple design has eight sets of pedals for the kids (ages 4 to 12), a driver seat for the adult, and three bench seats for freeloaders. The top speed is about 10 miles per hour, and features a sound system and canvas awning to ward off rainy days.

Co.Exist spoke with Thomas Tolkamp who built the BCO about its origins and how the idea is catching on around the world for the sets of 11 lucky kids who get to arrive in school pedaling their own school bus.

Co.Exist: What was the inspiration for the bus?

Tolkamp: I had already made other big bikes (like the Beerbikes) and a few years ago someone mailed me with the question if I could develop a bike especially for transporting kids. So for that other company (a child care) I made the first bicycle. Some other companies were also interested, so I began to produce more bicycles and have improved the bike.

How many of these have been sold? How many are in use?

We’ve sold around 25 bikes. They are still all in use, except for the very first one, which was a prototype.

Does it only come in yellow?

How much does it cost?

Can the kids alone make it go?

It’s possible to ride the bike without the motor when most seats are in use, but it wouldn’t be safe to ride without an adult.

Do you have plans to export it?

We have already exported some bikes to Belgium and Germany, but not this kind of bike. We have gotten frequent requests for information about the bike from all around the world (North America, South America, Europe) but we’ve never sold a bike outside of Europe.

Do you think it will work well in other countries, or is it something special about the Dutch culture?

I don’t know really, but what I do know is that people from all around the world like the idea. We have gotten interest from the press all over the world and all people are positive.

I hope I can sell the bike in the near future to a foreign country and see how people at other countries react on the bike. I think it will work well in other countries, because as more and more people [are] becoming fat and “green living” becomes more important, ideas like this get more popular. 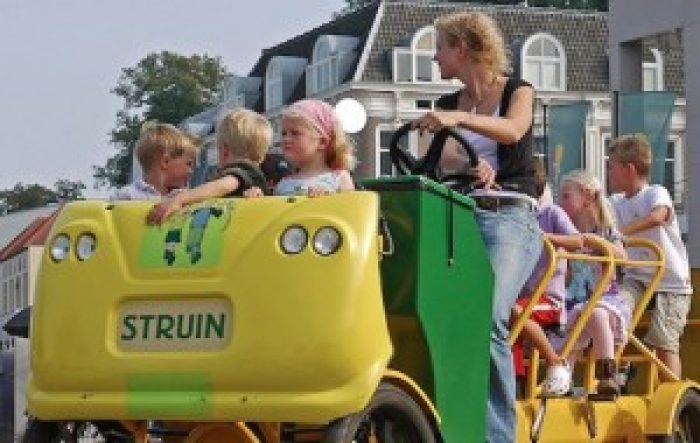