A Billboard That Produces Water 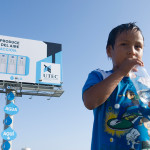 This Billboard Generates Clean Drinking Water Straight From The Air

In Lima, Peru, a billboard uses a filtration system to create clean water for the water-starved city–and advertises for an engineering school.

by Ariel Schwartz, published in FastCompany

Universities usually try to attract students with successful alumni, traditional advertisements, and in the case of elite schools, a positive track record. UTEC, the University of Engineering and Technology in Lima, Peru, decided to pull off a clever engineering stunt to attract a new class of techie do-gooder students: create a billboard on the Pan-American Highway that generates potable water out of thin air.

Lima is the ideal place for a water-creating billboard–it almost never rains in the desert environment, so there is a lack of fresh water. And yet atmospheric humidity can climb up to 98%, so the air is thick with potential droplets. Alejandro Aponte, the creative director at Mayo DraftFCB Peru (the agency behind the billboard) tells us in an email how it came together:

“What we came up with, was the idea of showing these young students, with a real-life example, how engineer methods can give solutions to real-life problems. The example in this case is very clear: We solved the lack of potable water in a needed community, transforming the air humidity into free-drinking water. After some research and working together with a group of interdisciplinary people, we found out it was possible to generate drinking water from the air humidity present in the area.”

The billboard contains five generators that churn out purified water through a reverse osmosis system. The system sends water to a tank that can store up to 100 liters per day. As you can see in the video above, people are actually using the billboard to get fresh water. In three months of operation, the billboard has produced thousands of liters.

This was a great publicity move for UTEC; the positive community response means that the billboards could eventually be duplicated elsewhere. “We are both, UTEC and the agency, very enthusiastic with the results and impact of the billboard in the community, the media and in social networks, but above all in the local people that have been benefitted with the free drinking water they didn’t have before. Therefore, it is very possible that these panels are replicated in other sectors of the city,” says Aponte. 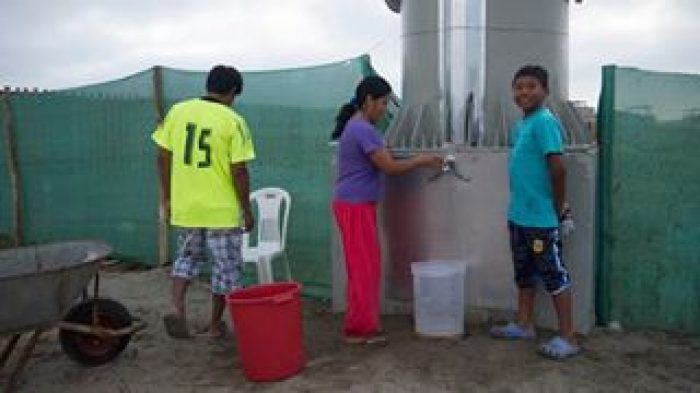