Pope Francis ignites a revolt that will overthrow American capitalism

Pope Francis ignites a revolt that will overthrow American capitalism 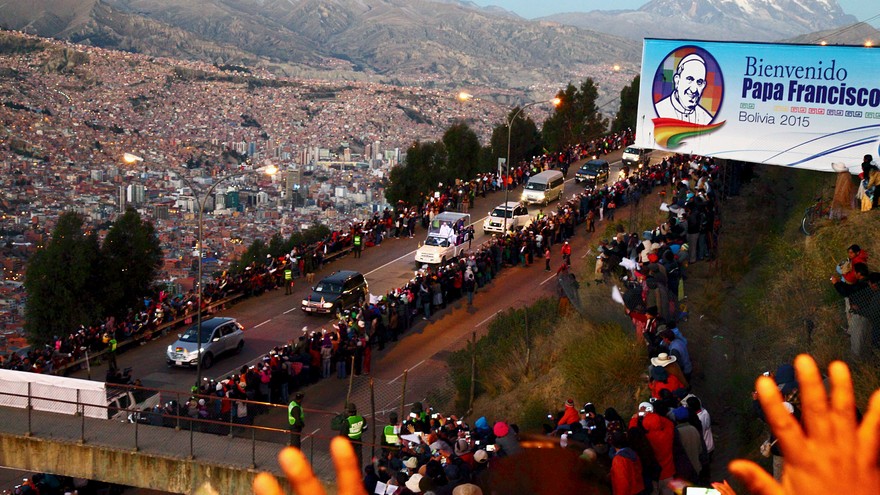 Yes, Pope Francis is encouraging civil disobedience, leading a rebellion. Listen closely, Francis knows he’s inciting political rebellion, an uprising of the masses against the world’s superrich capitalists. And yet, right-wing conservatives remain in denial, tuning out the pope’s message, hoping he’ll just go away like the “Occupy Wall Street” movement did.

Never. America’s narcissistic addiction to presidential politics is dumbing down our collective brain. Warning: Forget Bernie vs. Hillary. Forget the circus-clown-car distractions created by Trump vs. the GOP’s Fab 15. Pope Francis is the only real political leader that matters this year. Forget the rest. Here’s why:

Pope Francis is not just leading a “Second American Revolution,” he is rallying people across the Earth, middle class as well as poor, inciting billions to rise up in a global economic revolution, one that could suddenly sweep the planet, like the 1789 French storming the Bastille.

Unfortunately, conservative capitalists — Big Oil, Koch billionaires, our GOP Congress and all fossil-fuel climate-science deniers — are blind to the fact their ideology is on the wrong side of history, that by fighting a no-win battle they are committing suicide, self-destructing their own ideology.

The fact is: The era of capitalism is rapidly dying, a victim of its own success, sabotaged by greed and a loss of a moral code. In 1776 Adam Smith’s capitalism became America’s core economic principle. We enshrined his ideal of capitalism in our constitutional freedoms. We prospered. America became the greatest economic superpower in world history.

But along the way, America forgot Smith’s original foundation was in morals, values, doing what’s right for the common good. Instead we drifted into Ayn Rand’s narcissistic “mutant capitalism,” as Vanguard’s founder Jack Bogle called the distortion of Adam Smith’s principles in his classic, “The Battle for the Soul of Capitalism.” The battle is lost.

In the generation since the Reagan Revolution, America’s self-centered, consumer-driven, mutant capitalism lost its moral compass, drifting: Inequality explodes, income growth stagnates, the poor keep getting poorer. Yet across the world, billionaires have explode from 322 in 2000 to 1,826 in 2015, with 11 trillionaire capitalist families predicted to control the planet by 2100.

But not for much longer, as Pope Francis’ revolution accelerates, as his relentless socialist message of sacred rights for all people makes clear. Why? Our mutating capitalist elite have triggered a massive backlash, a “profound human crisis, the denial of the primacy of the human person. The worship of the ancient golden calf has returned in a new and ruthless guise in the idolatry of money.”

An aggressive Pope Francis is on a mission to transform the mutant ideology of today’s capitalist world with its rampant profits-centered climate-science denialism. Fortunately, the pope will soon confront and challenge America’s GOP Congress directly, then the United Nations General Assembly to challenge the capitalist world’s failure to take climate change actions. Maybe they’ll finally wake up.

Pope Francis’ recent trip to South America revealed a clear anticapitalism, socialist message, calling for a “structural change to a global economy that runs counter to the plan of Jesus,” as reported in Time by Christopher Hale. Francis warned:

“The future of humanity does not lie solely in the hands of great leaders, the great powers and the elites.” The future “It is fundamentally in the hands of peoples and in their ability to organize. It is in their hands, which can guide with humility and conviction this process of change. I am with you.” The pope is warning all capitalists everywhere. As Jesus says in the Bible, the poor will always be with you, but the rich may not be after the coming revolution.

Yes folks, Pope Francis is a revolutionary destined to end up in the history books right up there with Lenin and Marx, Mao and Castro. He is obviously inciting revolution, wants civil disobedience and political insurrection, he is egging the poor into rebellion against a vastly outnumbered rich.

In fact, Francis has become one of the world’s great revolutionary leaders. He not only is inciting an uprising of the masses against wealthy capitalist billionaires, he’s out in front of the emerging global revolution, encouraging the masses, shouting battle cries, a leader in the tradition of Washington.

So the media should stop mistaking Francis’s congenial nature, his perpetual smile, dismissing his true intentions. His is an aggressive call to arms, a call for a global revolution attacking today’s out-of-control, consumer-driven “mutant capitalism,” a call to replace capitalism with a new economic socialism giving the poor “sacred rights” on par with the superrich.

Time’s Hale went on to outline the four “foundations” of the pope’s coming “revolution.” Hale covered the pope’s tour in South America in, “Pope Francis Isn’t Holding Back — And U.S. Politicians Should Watch Out.” In Bolivia Francis warned that global capitalism is a failure and needs a “structural change” because it runs “counter to the plan of Jesus.” Hale then added that “leaders of both parties might regret their invitation to the 78-year-old Jesuit pontiff” to address a historic joint session of Congress in two months. Five reasons make the warning quite obvious:

1. Socialism: Everyone has a sacred right to land, lodging and labor

2. Humans, not capitalist profits, must be at the center of global economics

Pope Francis message is unambiguous: “Unbridled capitalism” has become a “subtle dictatorship,” is now the very “dung of the devil.” Ouch, that must hurt even the stone-cold Koch ego. Francis says that capitalism’s greedy “unfettered pursuit of money” is destroying the “common good,” setting a stage for revolutions. The pope urged the masses to “say no to an economy of exclusion and inequality, where money rules,” because capitalists will “destroy Mother Earth” in order to enrich the superrich elite. Yet another revolutionary call to battle.

Earlier Pope Francis’ encyclical warned that “doomsday predictions” about climate “can no longer be met with irony, disdain” or dismissed without action. Now, Francis is aggressively pushing world leaders and humans everywhere to fight against all economic injustices against individuals. The clock’s ticking loudly, time is “running out: we are not yet tearing one another apart, but we are tearing apart our common home” here on Earth. Pope Francis also encourages people to start demanding, “We want change!” Remember the 1976 movie “Network”: where an anchorman gets listeners shouting, “I’m mad as hell and I’m not going to take this anymore!”

4. Revolutions begin with angry citizens, not politicians or philanthropists

Time’s Hale says the pope’s call for “structural change won’t be the result from any one political decision.” The pope understands that politicians rarely lead. Real change is triggered from below, by angry mobs, they get “caught up in the storms of people’s lives,” fired up, rebel, motivated to act, then revolutions ignite and move fast like a wildfire on jet fuel.

5. Warning: Socialism is now a moral obligation, a commandment to obey

Admit it, Pope Francis is clearly inciting people to rebel with his passionate, provocative and inspirational message, which triggers memories of Marx, yet is directly from the Gospels of Jesus: “Working for a just distribution of the fruits of the earth and human labor is not mere philanthropy,” not just a handout from capitalist billionaires.

Instead Pope Francis shifts our focus: The socialism is now “a moral obligation. And for Christians, the responsibility is even greater: it is a commandment. It is about giving to the poor and to peoples what is theirs as a sacred right.” And if we fail to do give it freely, do not be surprised when revolutions explode across Planet Earth.