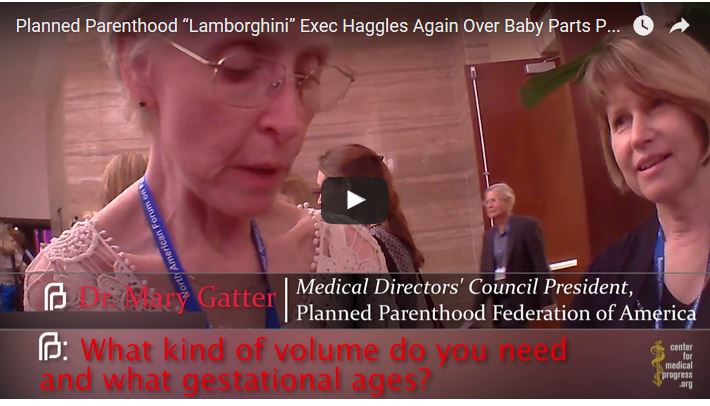 The Center for Medical Progress (CMP) has not been deterred by legal efforts to stop the group’s agenda to expose Planned Parenthood and its executives. On April 26, CMP revealed another video, this one featuring the Planned Parenthood executive known as the “Lamborghini lady” after she was captured on camera joking that she was trying to earn enough money to buy a Lamborghini by selling fetal tissue. Tuesday’s video is particularly damning as it disproves many of Planned Parenthood’s claims defending the legality of its fetal organ harvesting program.

CMP made major waves and forced a congressional investigation into Planned Parenthood with previously released tapes that included secretly recorded comments from executives of Planned Parenthood and StemExpress as well as undercover footage from clinics — including footage of fetal tissue being handled by workers, footage of fetal tissue from aborted pregnancies, and on-camera interviews with Holly O’Donnell, a former StemExpress procurement technician. The damning videos featured Planned Parenthood officials admitting to altering abortion procedures to procure fetal tissue, as well as selling fetal tissue for profit. Another video also revealed that StemExpress did not always obtain consent from mothers to use fetal tissue. In addition to the legal questions the videos raised, many criticized the barbarity of the fetal organ harvesting industry that the video footage captured.

In 2016, Center for Medical Progress head David Daleiden was indicted by a grand jury in Harris County, Texas, receiving a felony charge for using a fake ID and a misdemeanor charge for e-mailing an offer to buy fetal tissue. The charges were dropped in 2016. The California Department of Justice raided Daleiden’s home in 2016 to seize his laptop and hard drives, which held information pertaining to CMP’s 30-month investigation into Planned Parenthood. In 2017, California Attorney General Xavier Becerra filed 15 felony charges against Daleiden and associate Sandra Susan Merritt for posing as employees of a medical research company and secretly recording confidential conversations, and these charges still stand.

The scare tactics and legal proceedings have failed to discourage the Center for Medical Progress from exposing Planned Parenthood’s lies. On Tuesday, CMP released another video, which undermines claims made by Planned Parenthood that it has not sought any payments beyond what was legally permissible. In a letter sent by Planned Parenthood President Cecile Richards in 2015, Richards claims that the organization’s receipt of compensation for the tissue specimens was “fully legal, appropriate and common among health care providers” under a 1993 law. But the CMP video reveals otherwise.

In the video, Dr. Mary Gatter, the president of Planned Parenthood for America’s Medical Directors’ Council, is seen negotiating with the undercover journalists over the price of fetal body parts. They also discuss how they will handle the transfer of the fetal specimen.

“We may have to make sure that your staff who are on site are credentialed, privileges, whatever, background checks and all that stuff,” Gatter says on the video. “You know, you have to pay a little money for the use of the space.”

Gatter then haggles with the undercover journalist over the cost per specimen, with the journalist offering $50 and Gatter asking for $75.

As noted by Breitbart News, though federal law allows for the reimbursement of specific costs related to fetal organ or tissue donation, it does not permit the purchase and sale of the tissues and organs themselves.

In the exchange, Gatter also reveals that a technician named Heather from the biomedical firm Novogenix worked at the Planned Parenthood Los Angeles clinic to harvest the organ and tissue donations.

Ultimately, what Gatter reveals in this exchange is that Planned Parenthood was not entitled to reimbursements under the law, a point noted by Daleiden.

“The fact that [biomedical companies] Novogenix, StemExpress, and Advanced Bioscience Resources (ABR) stationed their own workers inside Planned Parenthood abortion clinics to perform the harvesting, packaging, and transport of aborted baby body parts demonstrates that Planned Parenthood had no reimbursable costs under the law,” says Daleiden.

Likewise, earlier in the video, Gatter asks, “What kind of volume do you need, and what gestational ages?” to which the undercover journalist replies that “most of the requests are 16 weeks and above.”

Daleiden notes, “The volume-based sums that Planned Parenthood charged these businesses for baby parts are criminal trafficking and profiteering in fetal body parts.”

This is the second undercover video to be released this year. The first is more disturbing, as it features Dr. DeShawn Taylor, previous medical director of Planned Parenthood Arizona and abortion provider at Planned Parenthood Los Angeles, graphically describing how to harvest high-quality body parts and how to possibly cover up infanticide.

Dr. Taylor explains to the investigators, “In Arizona, if the fetus comes out with any signs of life, we’re supposed to transport it. To the hospital.” When one investigator then asks if there was any standard procedure for verifying signs of life, Dr. Taylor replies, “Well, the thing is, I mean the key is, you need to pay attention to who’s in the room, right?”

The video also shows the callous nature of the Planned Parenthood executives. Dr. Taylor confirms she does elective abortions on healthy fetuses and pregnant women up to 24 weeks. Dr. Taylor also acknowledges that the feticidal chemical digoxin cannot be used in an abortion where fetal body parts will be harvested for sale, but describes dismemberment dilation and evacuation abortions that utilize digoxin. She then jokes about the physicality involved in those types of abortions.

“My biceps appreciate when the dig[oxin] works. I remember when I was a [Family Planning] Fellow and I was training, I was like, Oh, I have to hit the gym for this,” she says, describing the force she feels in her biceps when performing a dismemberment abortion with forceps.

CMP’s videos prompted a lengthy congressional investigation into Planned Parenthood’s fetal harvesting program, which culminated in December 2016 with the House Select Investigative Panel and the Senate Judiciary Committee referring Planned Parenthood and Novogenix to the FBI and U.S. Department of Justice for further investigation and possible criminal prosecution.