BZ: More seeding and softening of the ground for the flood of revelation just about to be released in the storm of Absolute data and Transparency. 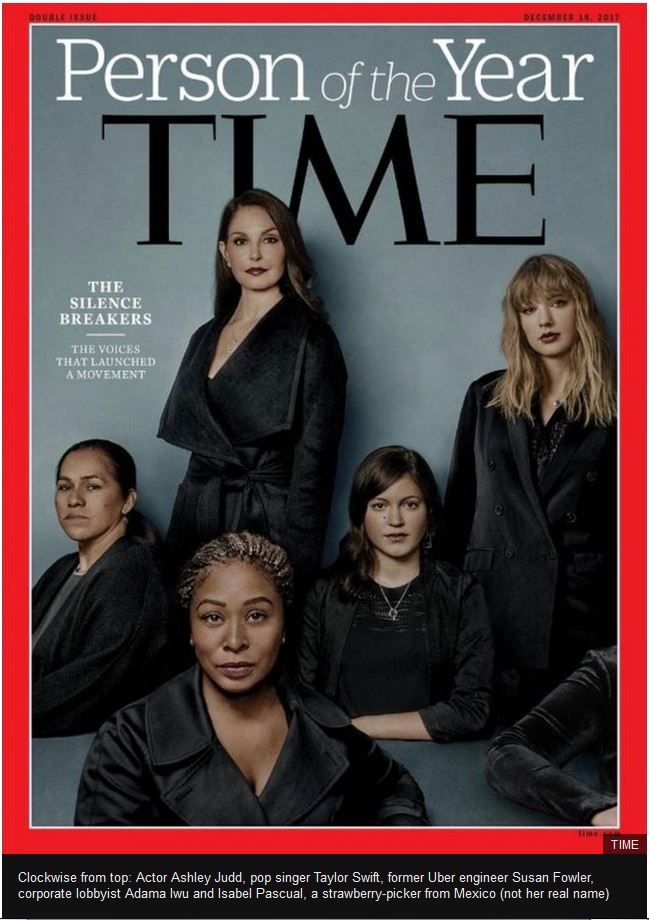 Time magazine has named “the Silence Breakers” – women and men who spoke out against sexual abuse and harassment – as its “Person of the Year”.

The movement is most closely associated with the #MeToo hashtag which sprung up as allegations emerged against Hollywood producer Harvey Weinstein.

But Time says the hashtag is “part of the picture, but not all of it”.

He told NBC’s Today programme that it “began with individual acts of courage by hundreds of women – and some men, too – who came forward to tell their own stories”.

The magazine illustrates the ubiquitous nature of sexual harassment by showcasing women from markedly different backgrounds on its cover.

Two celebrities are featured – Ashley Judd, one of the first to speak out against Mr Weinstein, and pop singer Taylor Swift, who won a civil case against an ex-DJ who she said had grabbed her bottom.

They are shown alongside Isabel Pascual, a 42-year-old strawberry picker from Mexico (not her real name); Adama Iwu, a 40-year-old corporate lobbyist in Sacramento; and Susan Fowler, 26, a former Uber engineer whose allegation brought down Uber’s CEO.

But many more people are identified as part of the movement behind the cover shot.

This “moment”, the magazine says, “doesn’t have a leader, or a single, unifying tenet. The hashtag #MeToo (swiftly adapted into #BalanceTonPorc, #YoTambien, #Ana_kaman and many others), which to date has provided an umbrella of solidarity for millions of people to come forward with their stories, is part of the picture, but not all of it…

“The women and men who have broken their silence span all races, all income classes, all occupations and virtually all corners of the globe.”

But, it says, collectively they have helped turn shame into outrage and fear into fury, put thousands of people on to the streets demanding change, and seen a slew of powerful men held accountable for their behaviour.

Those featured include Tarana Burke, the activist who created the #MeToo hashtag more than a decade ago, the actor Alyssa Milano who helped it explode on social media last October, actor Terry Crews, a group of hotel workers who have filed a lawsuit against their employer, State Senator Sara Gelser, an anonymous hospital worker who fears losing her job if she speaks openly, and Megyn Kelly, the former Fox News journalist whom Donald Trump accused of having “blood coming out of her eyes, blood coming out of her wherever” after she moderated a debate during the presidential campaign.

Ironically, President Trump – whose election Ms Kelly said was a “setback for women” that helps explain the #MeToo movement – was named as runner-up for Person of the Year this year, having been given the title last year. 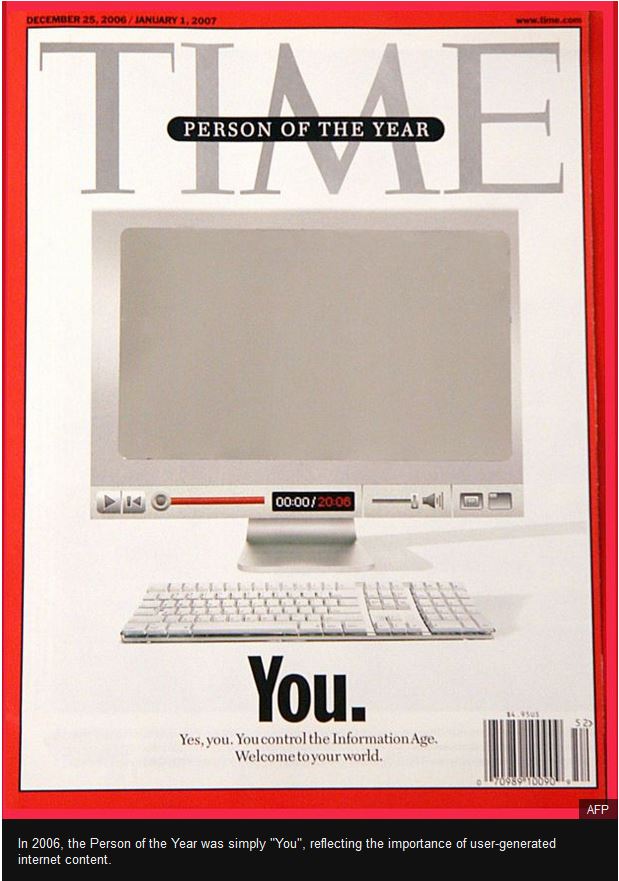 The magazine’s tradition – begun in 1927 as “Man of the Year” – recognises the person who “for better or for worse… has done the most to influence the events of the year”.

The great majority of people selected have been individuals – but by no means all. In 2014, “Ebola fighters” were recognised while in 2011 “The Protester” acknowledged the significance of the so-called Arab Spring.

It was in 1950, the magazine explains, that the “mould was broken” and “The American fighting-man” was chosen, to be followed by Hungarians in 1956 and later on Scientists, Americans under 25 and Mr and Mrs Middle America.

In 2006, the Person of the Year was simply “You”, with a mirror cover design, reflecting the importance of user-generated internet content.