An organisation which says it represents 1,000 members of the public lodged a summons with the High Court yesterday morning making a number of allegations against Bank of Ireland, including gross negligence and breach of contract. 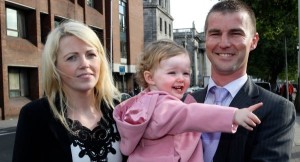 The group, which calls itself People of Éire, said the plenary summons lodged on behalf of a young Cork couple will be the first of a number against financial institutions to be lodged over the coming weeks.

People of Éire said the cases “will seek to expose a number of issues surrounding the economic collapse of Ireland. The cases will deal with a number of different areas, including the damage to the rights of the borrower, the breach of regulatory requirements, the breach of acts and statues relating to company law and financial reporting”.

It also said it expected “numerous criminal complaints relating to individuals within the banking sector will be filed with An Garda Síochána”.

According to Claire Cullinane, one of the founders of Debt Options Ireland, which is a leading body behind People of Éire, said more than 500 people accompanied Macroom couple Patrice and Roy Keating, who are in their 20s, and their 14-month-old daughter Erin, to the High Court yesterday to lodge their summons.

She said that the two-page summons alleged, among other things, breach of trust, gross negligence, non-compliance with the code of conduct of the Central Bank, breach of consumer protection code, breach of accounting regulations, failure to disclose a liquidity or insolvency problem in a timely manner, and breach of contract.

Ms Cullinane said the crowd stayed in the car park to show as much respect for the court as they could.

“The whole High Court stopped,” she said. “All the windows opened in the courts and all the barristers and solicitors came out on the steps and listened and supported us.”

Ms Cullinane said the movement had started out of the need for people to support each other.

“For some, they are in trouble themselves,” she said. “The trouble there is some people cannot even read the paperwork anymore because they have become so overwhelmed.

“For others, they are dealing with illnesses such as cancer, heart attacks, and they are afraid of the paperwork running away on them. Local people in their area go in and help them go through whatever it is they need and then some people want to go through the whole way to taking a summons in the High Court and have a justifiable case to do so.

“Others are just happy to be able to breathe again. There is no judgment, it’s whatever people need.”

Ms Cullinane said she set up a training programme to help lay litigants and people in trouble.

“A part of my resumé would be as a therapist and I was seeing more and more people needed all kinds of therapies to deal with stress, but unfortunately they did not have the money to go to therapists,” she said.

“Part of the work I have done over the years is train international governments on stress management and creative thinking. It was time to put the boots on, get walking, and go out to the people rather than waiting for the people to come to me.

“Up to now, everything has been free. Everything within Debt Options is free because lay people were helping other lay people. Now it has moved forward because we have professional solicitors and barristers so everybody has come in as part of the company.

“The new body, People of Éire, has a donate button and everybody all over this country, and even emigrants abroad, can donate anything they want to the fund.”