Pawns In The Game

Pawns In The Game by William Guy Carr 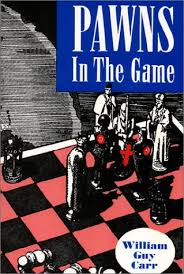 This (audio) lecture by Commander Carr briefly explains what is written in his books (Pawns In The Game, Red Fog Over America, Proofs Of A Conspiracy), the reasons why he got involved in his research, and some of his conclusions. In the 1950s, one of the foremost researchers on the genocidal Satanic Illuminati Conspiracy, others such as Ted Gunderson, Fritz Springmeier and Bill Cooper continued his research (NOTE: the pictures relate to the subject but not to the lecture itself, which was in 1958 and therefore audio only).

“A few illustrations will be given to show how individuals and governments have remained just as stupid and naive in regard to warnings given them concerning the evil mechanism of the real leaders of the World Revolutionary Movement.”

“Had the people of the Aryan and Semitic races remained steadfast to their belief in God (YHWH), and faithful to His commandments, the Forces of Evil could never have accomplished their evil purpose (divide & conquer).”

“I know thy works, and tribulation, and poverty, (but thou art rich) and I know the blasphemy of them which say they are Jews, and are not, but are the synagogue of Satan.” [REVELATION 2]

I had an interesting conversation with a (former) 333 degree Mason from the UGLE, about an uber-Satanic super-elite for whom a particular initiation ceremony (which I believe to be a “Luciferian Initiation”) is an absolute necessity in order to prove that the initiate has totally defected from God, God’s grace and God’s will. I had little reason to doubt the (former) Mason because he seemed genuinely upset that his (former) buddies had turned against him and tried to poison him. You see, he refused to complete the initiation ceremony because it involved the raping and killing of a child.

The survivor of child rape understands the outer nature of the human creature, which is, deceiver and predator.

The scientist likes to tell us that he is studying the laws of the universe. He is not, because a mathematical model of the universe is not the universe. We have been conditioned to accept virtual reality (the model and its limitations) as reality in order to be disconnected from natural law (the universe). For what purpose? The destruction of creation? Does YHWH (God) exist? Has Yahuwshua (Christ) overcome death? Anything is possible.

The (real) Book of Enoch was censored because it seems to contain God’s promise that the (fake) illuminati will be destroyed. Are you safe?

COPYRIGHT: “For the purpose of free copying, distribution and re-broadcasting (non-profit), any-time and anywhere, the right is provided by ‘fair-usage’ laws serving national security, public interest, health education, world peace and the social welfare and safety of Civilization.”