by Janine Acero, published on Natural News, on November 08, 2017 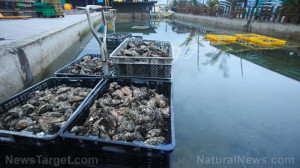 (Natural News) Researchers at William & Mary’s Virginia Institute of Marine Science (VIMS) have determined the role of oysters in reducing nutrient pollution through inference of the denitrification potential of microbiomes in the gut and shell of eastern oysters. The study is the first to identify and quantify the potential denitrifying nature of bacteria in oysters using a new computer program that interprets bacterial activity based on the sequences of ribosomal RNA genes.

In the study, the scientists explored the capability of microbiomes (community of microscopic organisms) living inside and on the oysters for denitrification.

According to lead author Ann Arfken, a VIMS Associate Professor, “Most studies addressing denitrification associated with oysters have focused on sediments in and around oyster reefs.”

Thanks to the results of the study, the researchers believe it is possible to reduce nutrient levels in coastal waters through an oyster restoration project. Unlike previous studies which focused on sediments for denitrification capabilities, the researchers focused on the oysters themselves. “We found that oyster shells contain unique microbial communities with higher denitrification activities than sediments,” according to study co-author B.K. Song. “It’s thus possible to reduce nutrients at the beginning of an oyster restoration project as shell microbiomes are actively removing fixed nitrogen.”

Studies of an organism’s genetic makeup are logistically and financially challenging. The researchers developed a solution to this challenge through a new computer program called “PAPRICA” – Pathway Prediction by Phylogenetic Placement – that allowed researchers to interpret metabolic pathways from gene sequences based on a small sub-unit of ribosome called 16S rRNA.

Song explained: “We combined a customized genomic database with the PAPRICA program to identify bacteria carrying denitrification genes among the microbiomes associated with oyster guts, shells, and reef sediments. This would be somewhat like distinguishing among different human populations by comparing the number of stomach ailments with the gene needed to digest milk.”

Using this technique, the research team measured rates of denitrification among live oysters, oyster shells and sediments near oyster reefs. They discovered that live oysters and shells had higher denitrification potential and carried a particular gene sequence called nosZI that is an important denitrifier and which could effectively remove nitrogen in oyster reefs, according Arfken.

The study was a complex undertaking but the research team remains optimistic in conducting more studies to further validate the use of gene-based metabolic inferences as a reliable method in identifying potential in microbiomes. “We have to be careful when inferring denitrification and other metabolic processes from the presence of a gene in a bacterial genome,” said Arfken.

The study was published in the September 29 issue of PLOS ONE.

Oysters are bivalves that live in brackish or saltwater habitats, where they congregate in groups called “oyster reef.” Oyster reefs are a critical source of habitat and food for other animals. Oysters are filter feeders, consuming microscopic compounds such as phytoplankton, which contain nitrogen particles. This process significantly improves the quality and clarity of the water. Oysters (and other mollusks) are considered a keystone species, which means an ecosystem will collapse without them.

Denitrification is a facilitated process in the microbial level whereby the compounds nitrate and nitrite (found in soil, air, and water) are chemically reduced to nitrogen gas, which is relatively harmless, but could be highly toxic to aquatic life in excessive amounts. An excess in nitrogen in aquatic habitats can have devastating results such as lack of oxygen (marked “dead zones”), reduced harvests in fisheries, and loss of sea-grass habitat. One of the ecosystems to have suffered this phenomenon is the Chesapeake Bay. (Related: Massive oyster die-offs in Chesapeake Bay leave watermen jobless, local economy in shambles.)