Speaking at a local school board meeting earlier this month, a Tennessee high school senior issued a brief and incredibly insightful address on the problems with Common Core standards.

Ethan Young, a student at Farragut High School in Knox County, Tenn., made his case as to why he believes the school district should drop the new national education standards, a set of guidelines that were never voted on by Congress, the Department of Education nor by local or state governments.

“The president essentially bribed states into implementation via ‘Race to the Top,’ offering $4.35 billion taxpayer dollars to participating states, $500 million of which went to Tennessee,” Young said. “And much like No Child Left Behind, the program promises national testing and a one-size-fits-all education, because hey, it worked so well the first time.”

“If nothing else, these standards are a glowing conflict of interest and they lack the research they allegedly received,” he added.
Young also argued that Common Core standards display a “mistrust of teachers,” a line that prompted applause from the audience. 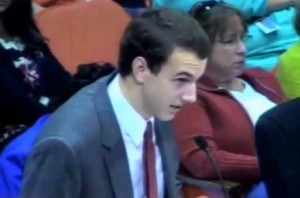 “I stand before you because I care about education, but also because I want to support my teachers,” he said. “And just as they fought for my academic achievement, so I want to fight for their ability to teach. This relationship is at the heart of instruction, yet there will never be a system by which it is accurately measured.”

The high school senior went on to argue that “standards-based education is ruining the way we teach and learn.” He also revealed that legislators and administrators have told him “that’s just the way things work.”

“I’m gonna answer that question: Bureaucratic convenience,” he added. “It works with nuclear reactors, it works with business models, why can’t it work with students? I mean how convenient, calculating exactly who knows what and who needs what. I mean, why don’t we just manufacture robots instead of students? They last longer and they always do what they’re told.”

The problem is, the extremely bright student continued, “education is unlike every other bureaucratic institute in our government” because the “task of teaching is never quantifiable.”

Government bureaucrats will never be able to measure “creativity, appreciation, inquisitiveness” but they are the “purpose of education,” he lectured.
“Somewhere our Founding Fathers are turning in their graves — pleading, screaming and trying to say to us that we teach to free minds. We teach to inspire. We teach to equip, the careers will come naturally.”