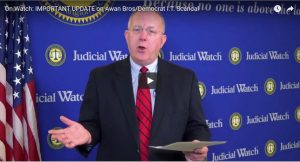 BZ: Remember in all that is coming to light, its not about democrats and republicans… one side good one side bad… The 2 party system is just one of many of the illusory facets of the false construct that is crumbling down.

New reports have emerged that dozens of House Democrats waived the background checks on the #AwanBrothers — the House I.T. aides handling their cybersecurity and with access to their email systems. Judicial Watch President Tom Fitton went to Capitol Hill last year to help shine a spotlight on the ongoing #AwanBrothers I.T. scandal in the House of Representatives that the mainstream media — and, sadly, even our Justice Department and much of Congress — are all ignoring. This is a story that involves political corruption, alleged cybersecurity breaches, the potential sharing of private constituent info, possible large-scale fraud, cover-ups, and threats to our national security.