The director wants to find the humanity in the Russian leader. Too bad he’s not a better interviewer. 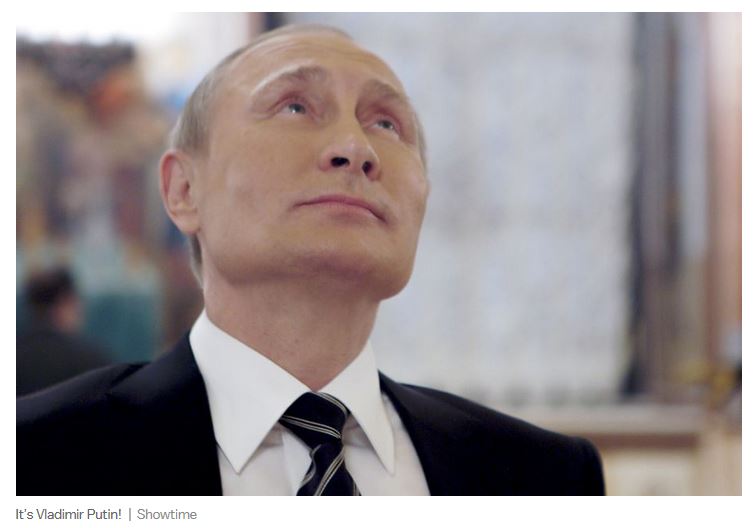 The most telling moment in The Putin Interviews, director Oliver Stone’s four-hour conversation with Russian President Vladimir Putin, recorded over the course of nearly two years, comes late in the second hour.

Stone is trying to get Putin to say whether he does or doesn’t like then-presidential candidate Bernie Sanders. Putin demurs entirely, but offers up a theory of how power functions.

Should Sanders become president, Putin says, he would suddenly realize the vast weight of the American bureaucracy that existed underneath him. He might make some changes to the US on a domestic level, but he would ultimately be unable to change that much — the person at the head of the state matters less than the centuries of power the state has accumulated and will protect at all costs. People aren’t responsible for what happens; the vast structures surrounding them are. Look at Barack Obama, Putin suggests. He sincerely wanted to close the Guantanamo Bay prison, and did he? No. You can’t fight the state.

This is telling for two reasons. The first is that it, if true, explains Putin’s motives in regards to the United States in the time since that interview was conducted in 2016. But the second reason is even more telling. This isn’t just how Putin sees [insert US president here]. It’s how he sees himself: as a conduit for the vast sweep of history, guided less by his own political beliefs and desires than by forces even he can barely understand.

Oliver Stone is not a great interviewer, and that ultimately compromises this film

The knock against The Putin Interviews is that it’s a bit of hagiography on the part of Stone, who’s the kind of reflexive old lefty who sees the US as the root of almost all of the world’s ills and, therefore, anyone who opposes the US even mildly as a necessary evil to push back against the American-imposed darkness.

Regardless of how much you agree with this point of view, it’s animated nearly all of Stone’s films and documentaries, both good (JFK) and not so good (W.).

And it’s not a bad framework for a scripted film. In JFK, for instance, the idea that the US power structure is so entrenched that it will create a byzantine conspiracy to remove one man who dares oppose it even slightly becomes a vivid portrayal of the country’s darkest self. You don’t have to believe that JFK conspiracy theories are literally true to believe JFK is true, in other words. At his best, Stone gives us a way to discuss these fears we have about our country’s true aims. 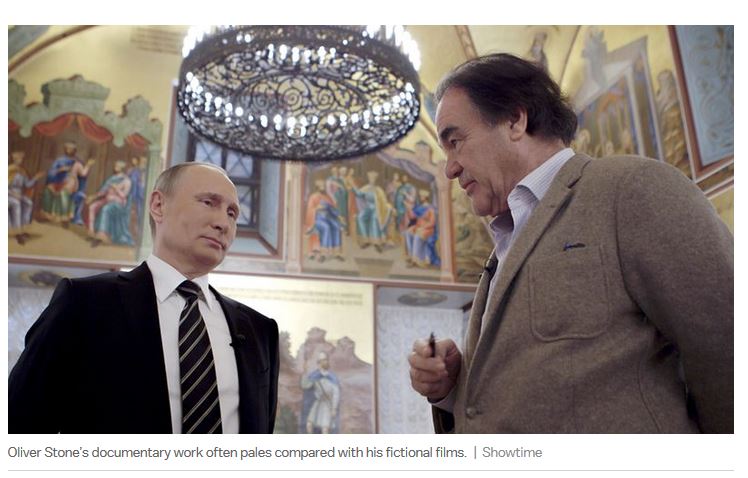 But in a documentary — even a documentary with aims of propaganda — that framework works less well, because it becomes just as simplistic a frame for reality as “US good, everybody else bad.” Of Stone’s documentaries, his 10-part 2012 Showtime series The Untold History of the United States probably came closest to blending his worldview with a truly compelling nonfiction film. But even there, Stone often went in for tit for tat — sure, the Soviet Union might have done this bad thing, but the US also did this bad thing.

It worked there as a way to try to jar Americans out of a post-Cold War complacency, a belief that we might have done some bad things in that period, but it was all justified in the name of beating back the Soviet menace. But it works less well in The Putin Interviews, which too neatly glosses over plenty of things that Putin is doing to his own people in the name of painting him as a reasonable critic of the US.

This is particularly egregious when the film turns to, say, Russia’s treatment of its LGBTQ citizens, or its frequent military incursions into former Soviet republics like Ukraine and Georgia.

Stone will suggest that critics find Russia’s anti-LGBTQ laws overly harsh, and then Putin will say, “Oh, hey, I don’t really agree with people who are gay, but we don’t persecute them either.” But Stone doesn’t otherwise provide evidence to the contrary. He just suggests it exists, then lets Putin respond to it, within a framework that has already written off most critics of Russia, especially those in the US media, as untrustworthy.

What’s most frustrating about this is that it’s clear Stone doesn’t intend for the film to be a direct celebration of Putin. He’s cagier with Putin than I expected, given the prerelease hype, and he’ll occasionally pounce on one of the leader’s contradictions. He also films Putin, frequently, from jittery, off-center angles, in ways that make you question not just the man but the presentation of the entire interview itself. (My favorite choice in this regard is Stone’s decision to let you hear his Russian-to-English translator softly murmuring over most of Putin’s answers.)

But Stone simply isn’t a good enough interviewer to make this a valuable exercise. He leaves obvious follow-up questions dangling, and he’s too indebted to his original vision of the project — as a sort of “let’s figure out who this man is, instead of who we’ve heard he is” biography — to really roll with major world events, be they the Syrian conflict or accusations of Russian meddling in the 2016 election. The events depicted in this documentary are fluid, and Stone isn’t good enough at pivoting to match them. 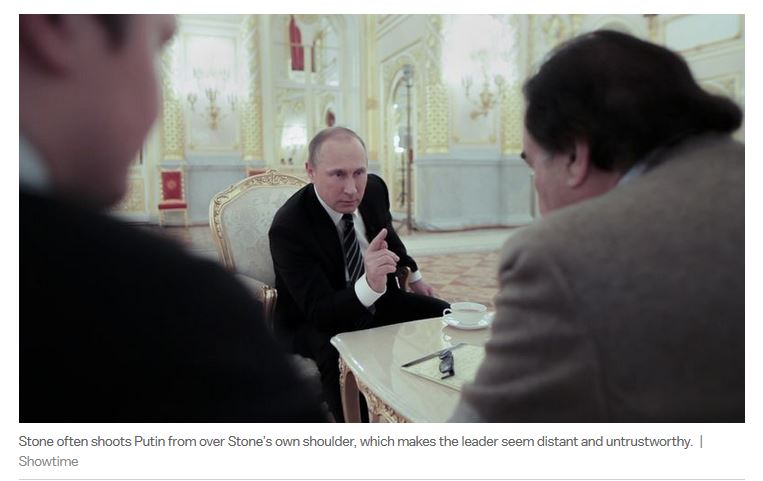 But as with all Stone projects, even the worst ones, it’s hard to simply dismiss The Putin Interviews. As a journalistic enterprise, it’s basically worthless, and as a filmmaking enterprise, Stone has done far better. There are times when I was simply tempted to write off the whole thing as a cagey interview subject getting one over on a not terribly experienced interviewer.

But I’d always return to the idea introduced in the very early portions of the film, when it was clear Stone wanted to demythologize Putin a bit — to make him less of a god-emperor and a Bond supervillain. He begins with a quick, short biography of Putin, placing him in the context of both Soviet and Russian history, and Stone keeps returning to these biographical details throughout, like when he suggests that Putin’s desire to possess the Crimean city of Sevastopol is due to the fact that his father was stationed there during the war. (Putin merely chuckles at this suggestion.)

I’m sure there will be people who watch this documentary and believe Stone went too easy on a figure who threatens the globe, or at least US hegemony over it. They are probably right. Even removing foreign policy from the equation, there is plenty to critique Putin on when it comes to his governance of his own country, from the way he’s turned it into a de facto authoritarian dictatorship to the aforementioned problems with LGBTQ rights to the complete inability of opposition parties to gain a toehold against him.

But somewhere in the midst of all of this, I was reminded of a coffee shop I used to visit, and a patron of that coffee shop, who spent long hours every night braying the tale of how thoroughly Putin had played the West, what a brave and strong leader he was, and how Obama had better get out of the way of the coming Russian century. The Putin he talked about sounded less like a human being and more like a long-lost king, reawakened and brought to our reality to guide us into some new, beautiful kingdom.

Putin is not that. But he is also probably not the root of all of the world’s evils. Americans were very good at belittling each other’s political opinions and believing in demonstrably false news stories long before Russian hackers allegedly got involved in the first place. Putin might put his thumb on the scales here and there, but so do leaders of nations as powerful or more powerful all over the globe. The scales, it sometimes seems, are made to be tipped.

Thus, I think, there’s value in exposing him as a man, as someone who tries to write off his worst tendencies as part of history’s epic sweep, or as part of being a creature of his particular political system. Putin might be a man with political values I wildly disagree with, and I might find the specter of further Russian involvement in world affairs disquieting. But knowing that he’s a human being, not a bogeyman, has a value of its own. At this moment in history, it’s still edifying, for a moment, to look at the man and realize he’s only that.

The Putin Interviews is available on Showtime Anytime.