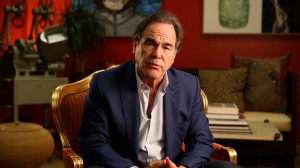 “Does it concern you that the government is spying on you?” he asked.

In the video, produced by the ACLU, Stone warned of the costs of unchecked government surveillance, and reminded viewers not to forget the lessons of the past.

“This country was born in rebellion because the British government was exerting too much control over American lives. We broke free and began to create a system of government meant to protect liberty,” he said. “Our national history reveals a constant struggle to stay true to this value. We face one of those moments of struggles right now.”

Stone urged Americans to stand up for civil liberties and to ask Congress to end the tracking of domestic communications.

This wasn’t the first time Stone spoke out against the NSA’s domestic spying program. During a Fourth of July appearance at the Karlovy Vary International Film Festival, the director praised whistleblower Edward Snowden as a “hero” for revealing secrets that the public deserves to know.