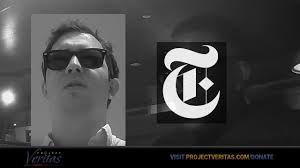 In the wake of the American Pravda NYT series, it appears that the NYT Audience Strategy Editor Nicholas Dudich–who was featured in Parts 1 and 2–may have been fired. It appears that Dudich’s name has been removed from the New York Times’ phone directory since last week. Project Veritas is still waiting on confirmation from the New York Times about his firing, but the evidence seems to suggest that he may have been removed from the Times. Donate: http://projectveritas.com/donate Website: http://projectveritas.com/