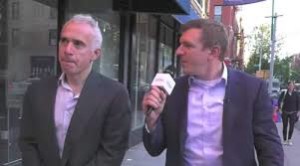 This morning, James O’Keefe confronted Deputy Managing Editor Clifford Levy in the streets of Brooklyn to get comment on the status of Nicholas Dudich’s employment at The Times. Nicholas Dudich was featured in Parts I and II of the American Pravda NYT investigation. He was caught on camera admitting his bias, and describing how he uses his position at The Times to achieve his personal agendas. O’Keefe also asked Levy if he had seen the comments that Senior Editor Desiree Shoe made on hidden camera, which corroborated some of Dudich’s claims. Shoe was caught admitting that NYT journalists wrote articles to expose how “crazy” Trump is in hopes to influence voters. Levy also was asked if he agreed with Executive Editor Dean Baquet’s description of James O’Keefe as a “sinner.” Levy declined to comment directly to any of the questions.