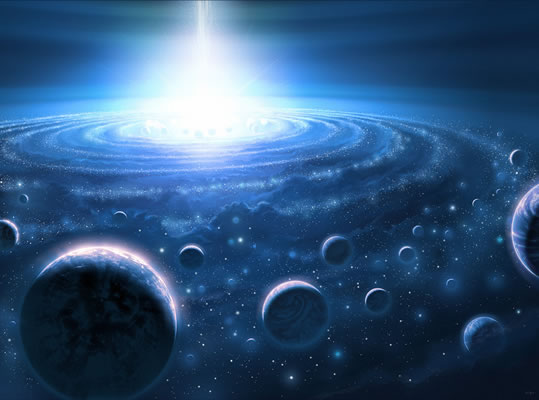 I did an ET connection the other day that just floored me, actually I did two this week that just popped my brain open even more, with amazement!!

The first one I want to talk about, took my vision to where they were (often times they arrive near the persons field I am connected to.)  A portal immediately opened near the treeline in my back yard and my vision or soul consciousness went up thru the portal and landed at a galaxy outside of our own.  There were three planets that were surprisingly close to each other in an upside down V pattern.  One Being from each planet was there to connect with my lady and they were light harvesters.  Each planet was so differently illuminated, one had two suns, one had no suns but a star filled sky and these stars were much closer to the surface of the planet than ours, which was their constant light source.  The third planet had no light source that I am remembering, instead, all life was inside the planet and all life was self illuminating (kind of like the jungle in the movie Avatar.)   The main speaker was from this self illuminating planet and looked a lot like our rhino’s.

These three planets worked in harmony with each other, harvesting the light from their planets, taking various frequencies and combining them together to create various types of very powerful, very specific light frequencies and distribute that light to other realms, especially earth thru her changes.

What truly blew my mind was when they explained that the “white light” most of have been told to breath in during meditation, is what they have combined from their planets to assist the awakening here on earth.  It has special frequencies within it that targets the humans neurotransmitters and pineal gland.  This light becomes more potent as we continue to integrate and wake up various parts of our brain.  Which of course, changes the entire electrical and chemical makeup within the body.

Let me tell you, my jaw dropped when I seen that.  I had always assumed that that light was the light of god.  The moment I said that out loud to her team, they instantly replied all things are Source energy and therefor, yes it is what I call god light, but very specifically created.  That was so exciting and mind boggling to me!!

They also explained how they use the auroras to distribute higher fields of light and not every shooting star is a meteorite, but their light-waves made visible.

If all that information wasn’t enough to melt my reality concepts, one (ET Connection) from yesterday took it a space further!!  Immediately there was a size distortion of my lady’s field.  It was as if my backyard (your field) became miles big instead of just an acre.  She was over by the fence line, that now seemed so much further away than it actually is.  Her ET team showed up at the ground level (sort of) in my landlords field (where March energies were.)  Hold that thought just for a moment…

Sometime last year, for a just a few weeks, spirit (your teams) were explaining to some how enlarged your energy field has become.  Some were like 50 miles wide.  It was never fully explained why, and as spirit so often does, this was a focus for a few weeks, then they were off to other things and never seemed to come back to that information and more understanding,  Then I naturally just forget about it.

So when my lady’s team stated that the distortion I was seeing was to make sure I realized how enlarged her energy field is (occupying a whole city or more) I remembered this particular focus from a while ago.

I so love how creative our ET’s can get with helping me understand what I am seeing for clarity of to the one I am seeing for.  They used the fence line as a sort of separation between my lady’s energy field and their 8th dimensional lab that is attached/connected to her field of energy.

All I could think of was a doughnut!!  My lady’s field is the space in the middle, and all around her is this ET lab held in 8th dimensional space.  I call it a lab because they called it a lab (of sorts) and damn this memory of mine… I cannot recall for the life of me, what they were doing.  I think I have had a memory-ectomy with those details or much other details with their exchange.  I guess it was for my lady’s consciousness only.

Never in a million years would I even conceive of ET’s setting up a base conjoined with a persons energy field.  But then again, there are the times we need and MUST get out of our preconceived perceptions!!  Otherwise, we block what is by assuming what was(n’t.)

ET’s aside for now, lets get to this amazing New Moon energy we are currently rocking.  This is a new moon like other.  It is bringing in higher frequency emotions and activating seeds within the human construct with these energies.  From what I am seeing and understanding thru the readings, there is a push/pull… ebb/flow on most peoples individual energy fields with the purpose of germinating the new seeds of experience thru each person.  It is a 7 day moon energy with the 16th being the apex/center point/day of.

One common theme for those that I see being germinated, their physical body’s are laying in rest beneath a dome shield thingie.  This is not the time of physical anything, as the physical energy is pulled up into other dimensions and being infused with this lunar energy for germination.  So, if you are like me and have become a couch ornament, honor that place!!  Much is happening!!!

As we get beyond this new moon energy, we come into the next growing season thru the full moon of May, which is on May 29th and is aptly named the “flower moon,” you will Be new flowers upon this amazing earth, for as long as you keep watering your New, Bountiful Self!!

While we are in this energy system, of course the sun is playing right along.  From spaceweather this morning:  ANOTHER HOLE IN THE SUN’S ATMOSPHERE: A new hole is opening in the sun’s atmosphere, and it is spewing a stream of solar wind into space. This extreme ultraviolet image from NASA’s Solar Dynamics Observatory shows the opening, which stretches more than 600,000 km from top to bottom

There is, as always, so much more, but I have early start of another crazy day.  So until tomorrow….

Big big ((((HUGZ)))) of new seeds of emotionally fused lunar energy to and thru the ALL!!!