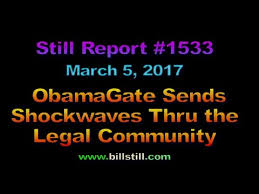 www.GetTheTea.com
Judge Jeanine blasted the new, burgeoning scandal of ObamaGate last night as she interviewed former Atty. General Michael Mukasey.
[insert] I’m getting in all sorts of interesting tidbits. This one just in.
Of 35,529 FISA warrants sought over the first 34 years of the court’s existence, only 12 have been denied. The first FISA warrant against Donald Trump was denied last June.
By the way, FISA is an acronym for, The United States Foreign Intelligence Surveillance Court. It is a court that meets in secret. It was established to oversee surveillance warrants against foreign spies inside the United States by federal law enforcement and the intelligence agencies.
The first FISA request on Trump Tower came AFTER the infamous meeting of Bill Clinton and Attorney General Lynch on the tarmac at the Phoenix Airport.
The second one came AFTER Wikileaks started publishing the first batch of John Podesta emails.