‘That’s insane’ says judge (and everyone else)

By Iain Thomson in San Francisco, published The Register, on October 18, 2017 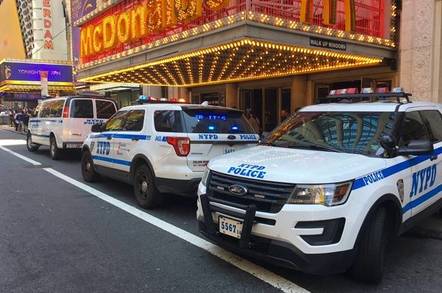 Nothing to see here, move along

Updated New York City cops claim they can’t tell anyone how much cash they have seized from people under civil asset forfeiture laws – because its database is not up to snuff.

The US city’s police department is being sued for snubbing a Freedom of Information request from the Bronx Defenders advocacy group, which had asked for figures on dosh seized by officers. America’s asset forfeiture laws are highly controversial: cops can snatch goods, cash and gift cards simply on the suspicion the gear may be associated with crime.

Records on asset seizures are stored in a Property and Evidence Tracking System (PETS), which was built for New York’s finest by Capgemini. It runs on an IBM z10 mainframe with a Big Blue DB2 backend database and a web-based an ERP system from SAP, according to contract paperwork dating back to 2012.

“They’ve customized a solution for the NYPD that has allowed us to completely digitize our evidence tracking process, which has not only given us a clear view of the data in our system, but has also freed up the time of our law enforcement teams so that they can focus on protecting and serving the citizens of NYC,” James Onalfo, NYPD’s chief information officer said [PDF] at the time.

“That’s insane,” she said repeatedly. “Do you want the Daily News to be reporting that you have no copy of the data? That deserves an exposé in the New York Times,” Court House News reported.

An expert witness for the Boston Defenders agreed with the judge. Robert Pesner, an IT consultant and a former government programmer with knowledge of the PETS technology, said [PDF] there was no reason why a simple SQL query couldn’t bring up the required data. It was also claimed the police department was unsure how to even back up the data store.

Capgemini has so far not come back to us here at El Reg to explain why its database system is quite so crap.

Call us cynical, but could it be that the Big Apple’s thin blue line has something embarrassing to hide? Have they spent it all, and not given a single dime or item back, or something? Based on other police forces across the US, this may well be the case. Civil asset forfeiture is coming under increasing scrutiny because the numbers don’t look good: you’d be forgiven for thinking officers are a little too eager to seize stuff from people, and keep hold of it, for no real reason.

In 2014, police across the US seized $4.5bn under civil asset forfeiture rules, and a large chunk of those funds are used to supplement department budgets and pay for little treats. By contrast, in that same year, the FBI reported that burglars stole $3.9bn from American citizens.

The problem is that under the Comprehensive Crime Control Act of 1984, funds can be seized even if the suspect isn’t arrested or even charged with an offense. And because this is a civil matter, people have to go to court and prove that their stuff was not the proceeds of crime, which can be difficult and very expensive.

The practice was reined in a tiny bit under the Obama regime, but President Trump’s Attorney General Jeff Sessions is a big fan of seizures. The rules for police have just been relaxed so that the plod can once again start to pocket big bucks from seizing people’s cash and property. And blow the loot on official police business, or eventually hand it back, of course. Cough.

Under the circumstances, the NYPD may be understandably nervous about revealing how much cash its offices have seized, kept and spent. But claiming that PETS just can’t produce the data seems like a high risk strategy that stretches credulity. ®

The cops have been in touch to say they do keep backups of their records despite experts saying otherwise. “Contrary to some published reports suggesting that NYPD does not electronically back up the data in its Property and Evidence Tracking System (PETS), all such data is backed up continuously in multiple data centers,” said NYPD Deputy Commissioner Stephen Davis.

We note from this court affidavit by NYPD technology bigwig Christian Schnedler that Capgemini is no longer involved in PETS, and left no documentation behind for making changes to or upgrading the software. Another vendor is now maintaining the database. Since the system is web-based, an automated browser scraper would be needed to extract and collate the requested information, and PETS is too fragile and too critical, we’re told, to be subjected to such a tool.

Crucially, Schnedler said: “There is no secondary or back-up system, and no repository of the data in PETS outside of PETS itself.”

Which to us sounds like there are no backups in any real sense. The cops have until the next court hearing on December 12 to put forward an expert witness to explain what the fsck is going on.