Bill Binney, who resigned from NSA in 2001, did not elaborate on President Obama’s specific role in surveilling Trump. 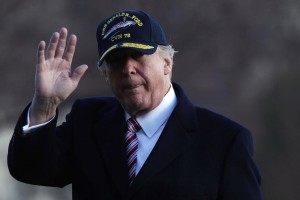 A veteran of the NSA has said President Donald Trump is righ to claim he was wiretapped and monitored. (Alex Wong/Getty Images)

President Donald Trump is “absolutely right” to claim he was wiretapped and monitored, a former NSA official claimed Monday, adding that the administration risks falling victim to further leaks if it continues to run afoul of the intelligence community.

“I think the president is absolutely right. His phone calls, everything he did electronically, was being monitored,” Bill Binney, a 36-year veteran of the National Security Agency who resigned in protest from the organization in 2001, told Fox Business on Monday. Everyone’s conversations are being monitored and stored, Binney said.

Binney resigned from NSA shortly after the U.S. approach to intelligence changed following the attacks of Sept. 11, 2001. He “became a whistleblower after discovering that elements of a data-monitoring program he had helped develop — nicknamed ThinThread — were being used to spy on Americans,” PBS reported.

On Monday he came to the defense of the president, whose allegations on social media over the weekend that outgoing President Barack Obama tapped his phones during the 2016 campaign have rankled Washington.

“How low has President Obama gone to tapp my phones during the very sacred election process. This is Nixon/Watergate. Bad (or sick) guy!” Trump tweeted.

“Is it legal for a sitting President to be ‘wire tapping’ a race for president prior to an election? Turned down by court earlier. A NEW LOW!… I’d bet a good lawyer could make a great case out of the fact that President Obama was tapping my phones in October, just prior to Election!,” he continued.

Binney seemed to go further than the assessment of former Attorney General Michael Mukasey, a George W. Bush administration official, who offered a tacit defense of Trump to ABC on Sunday.

“This is the difference between being correct and right,” Mukasey said. “The president was not correct in saying President Obama ordered a tap on a server in Trump Tower. However, I think he’s right in that there was surveillance and that it was conducted at the behest of the attorney general – at the Justice Department through the FISA court.”

The judges on the FISA court are “not even concerned, nor are they involved in any way with the Executive Order 12333 collection,” Binney said during the radio interview. “That’s all done outside of the courts. And outside of the Congress.”

Binney told Fox the laws that fall under the FISA court’s jurisdiction are “simply out there for show” and “trying to show that the government is following the law, and being looked at and overseen by the Senate and House intelligence committees and the courts.”

“That’s not the main collection program for NSA,” Binney said.

What Binney did not delve into, however, was if President Obama directed surveillance on Trump for political purposes during the campaign, a core accusation of Trump’s. But Binney did say events such as publication of details of private calls between President Trump and the Australian prime minister, as well as with the Mexican president, are evidence the intelligence community is playing hardball with the White House.