by Aaron Klein, published on Breitbart, on February 15, 2017 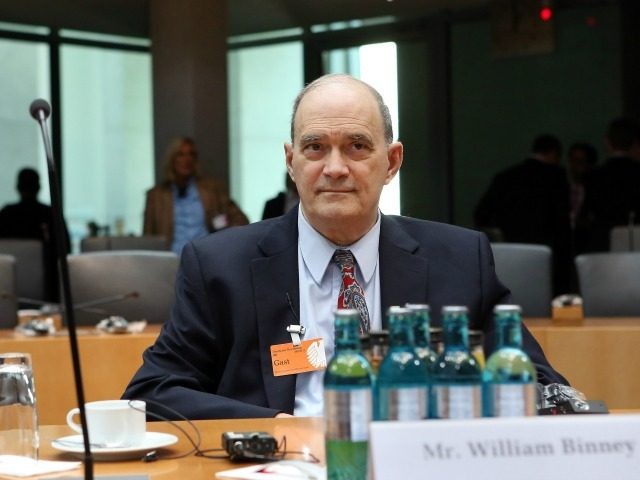 Binney was an architect of the NSA’s surveillance program. He became a famed whistleblower when he resigned on October 31, 2001 after spending more than 30 years with the agency.

Asked whether he believes the NSA is tapping Trump, Binney replied: “Absolutely. How did they get the phone call between the president and the president of Australia? Or the one that he made with Mexico? Those are not targeted foreigners.”

Binney further contended the NSA may have been behind a data leak that might have revealed that Michael Flynn, Trump’s national security adviser, allegedly misled Vice President Mike Pence and other Trump administration officials about the contents of his phone calls with Russia’s ambassador to Washington.

Regarding Flynn’s case, Binney stated of the NSA:

If they weren’t behind it, they certainly had the data. Now the difference here is that FBI and CIA have direct access inside the NSA databases. So, they may be able to go directly in there and see that material there. And NSA doesn’t monitor that. They don’t even monitor their own people going into databases.

So, they don’t monitor what CIA and FBI do. And there’s no oversight or attempted oversight by any of the committees or even the FISA court. So, any way you look at it, ultimately the NSA is responsible because they are doing the collection on everybody inside the United States. Phone calls. Emails. All of that stuff.

He was speaking on the podcast edition of this reporter’s talk radio program, “Aaron Klein Investigative Radio,” broadcast on New York’s AM 970 The Answer and Philadelphia’s NewsTalk 990 AM.

During the interview, Binney referred to a 2008 report referencing two NSA whistleblowers who said they worked at the agency’s station in Fort Gordon, Georgia and were asked to not only monitor phone calls of U.S. citizens but transcribe them.

Utilizing data provided by whistleblower Edward Snowden, the Guardian and Washington Post in June 2013 released a series of articles reporting that the NSA was collecting the telephone records of millions of Americans.

Prior to those reports, National Intelligence Director James Clapper claimed on March 12, 2013 during an open session of the Senate Intelligence Committee that the NSA was not “wittingly” collecting data on Americans.

“Not wittingly,” Clapper said when asked whether the NSA was spying on U.S. citizens. “There are cases where they could inadvertently, perhaps, collect, but not wittingly.”

During the interview, Binney charged that the NSA was over-funded and out of control.

He offered recommendations for how he says Trump can reign in the agency:

He can order that they put a filter on the front end of all their collection that eliminates any U.S. citizens anywhere in the world unless they have a warrant for it. If they don’t, then he has to put people in jail if they violated.

On Wednesday, Trump singled out the NSA and FBI in a series of tweets about Flynn’s case as well as reports in the New York Times and Washington Post claiming further contacts between Trump advisors and Russia. 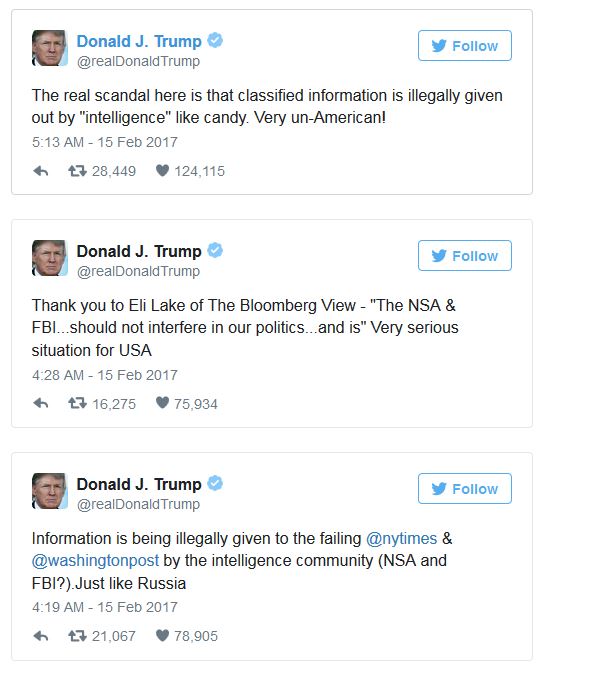 The Times on Tuesday seemed to be quoting from intercepted phone calls to report on alleged contacts between Trump campaign aides and Russian intelligence agents.

Phone records and intercepted calls show that members of Donald J. Trump’s 2016 presidential campaign and other Trump associates had repeated contacts with senior Russian intelligence officials in the year before the election, according to four current and former American officials.

American law enforcement and intelligence agencies intercepted the communications around the same time they were discovering evidence that Russia was trying to disrupt the presidential election by hacking into the Democratic National Committee, three of the officials said.