By Kirsty Needham, published on Sydney Morning Herald, on April 27, 2018

Beijing:  After a simple greeting, “I am happy to meet you”, from South Korean president Moon Jae-in, history was made.

Kim Jong-un stepped onto South Korean soil, the first North Korean leader to do so since the Korean War ended 65 years ago.

The men shook hands and held hands, and Moon briefly crossed into the north for another, spontaneous hand shake. 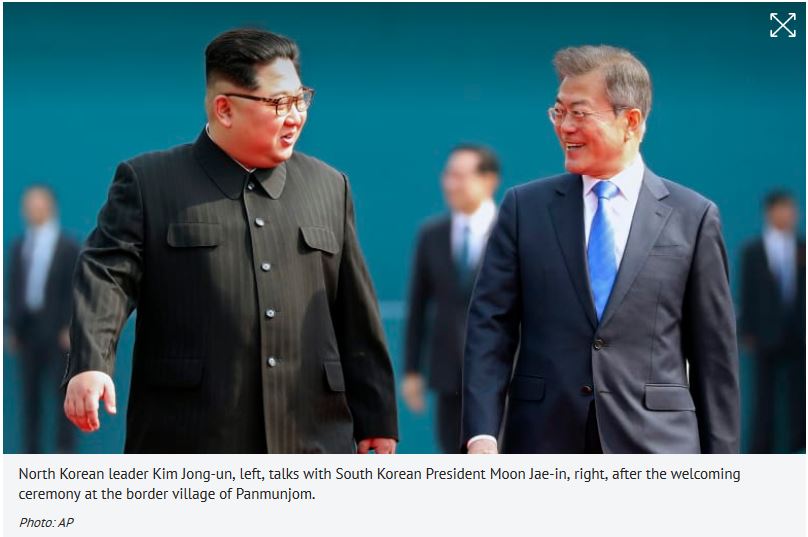 “I had so many mixed feelings as I was crossing the demarcation line,” Kim said a short time later, in rare comments before live television cameras.
Moon replied to Kim, at the start of their meeting in the Peace House: “The expectations of all of the world is on us. I want to give my thanks to the brave decision you have made.”

The cameras were then escorted out of the meeting.

The scenes that unfolded at the Panmunjom truce village on Friday morning would have been unimaginable last year, as North Korea in rapid succession fired long-range missile tests, exploded a nuclear test, and threatened it could reach the United States with an intercontinental ballistic missile.

The world had isolated the rogue regime, with China cutting off almost all meaningful trade across the border. 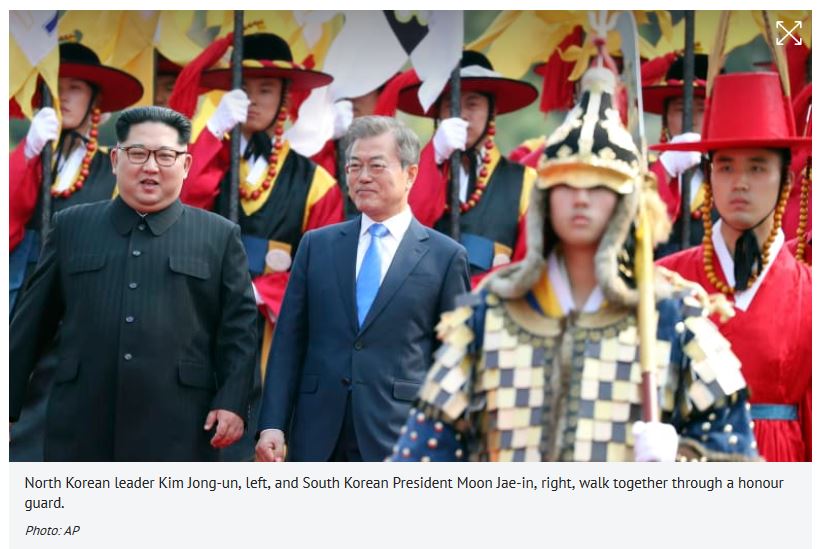 The tempo was changed this year when South Korean leader Moon, the son of North Korean refugees who had been elected on a platform of seeking improved engagement with its neighbour, allowed the Winter Olympics to become an olive branch. Kim’s sister crossed the border and met with Moon. 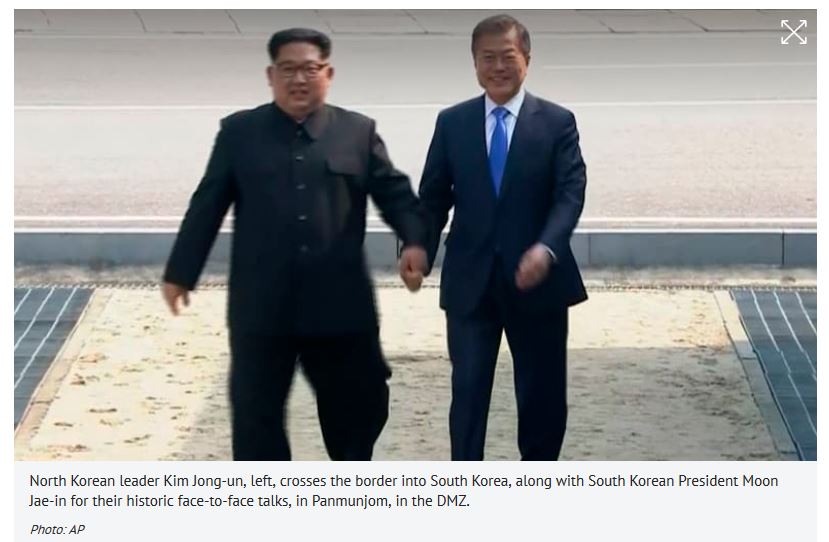 It was not only a political risk to cross the border, but a security risk, he said.

Kim must be comfortable enough with his domestic political power to take this “bold political move”.
Ahead of the meeting, Kim pledged to suspend nuclear and long range missile tests and shut down its nuclear test site. 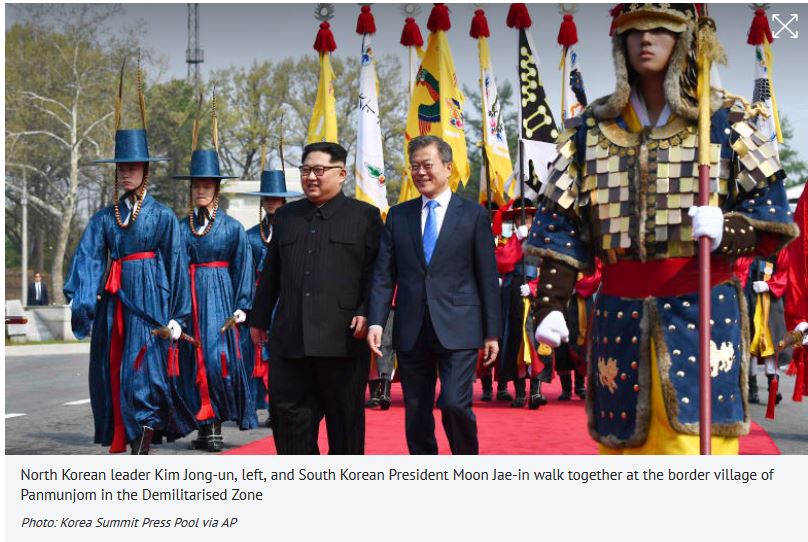 The United States, South Korea and China have long maintained that talks must focus on the eventual goal of denuclearisation. Kim has said this year he is willing to work towards this goal, but this has been greeted with much suspicion, as all previous efforts to get North Korea to give up its nuclear program under his father had failed.

Mr Delury said there was a lot of discussion about whether Kim and the US had a different definition of denuclearisation, but he believed this wasn’t a major issue.

“It is an issue of pacing, of verification and then of trade offs, “ he told BBC.
“Let’s assume Kim Jong-un does commit, he is willing to give this stuff up. How quickly is he willing to do it? How do they know what he has and that he is really giving it all up? And what is he going to get in return? …For North Korea to give up its nukes, they have to get an equal or better deal.” 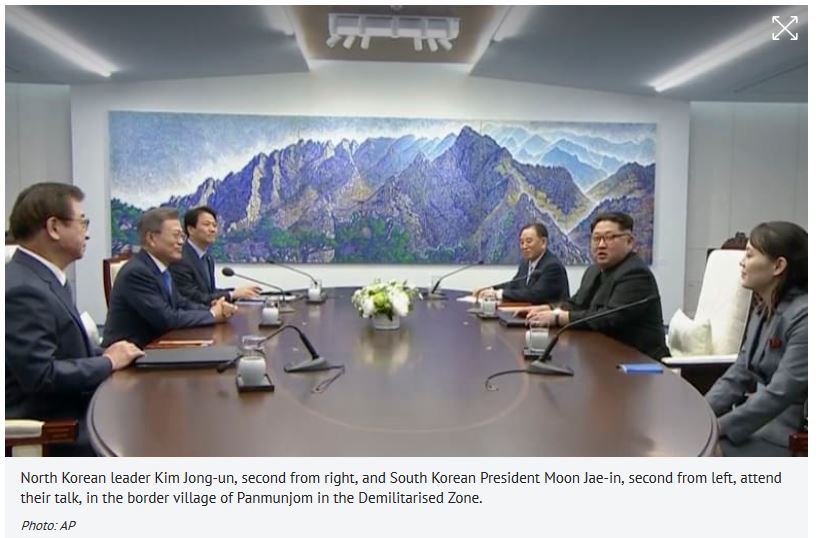 US President Donald Trump has agreed to meet Kim, potentially in June.

Mr Delury said leadership summits are important to establish personal relationships, but they were just the starting point and there would be a lot of details to iron out. The process would take months if not years.

Kim wrote in the Visitor’s Book, “A new history starts now – At the starting point of history and the era of peace”.
Earlier, his arrival on South Korean soil was greeted by an honour guard dressed in traditional silk robes and hats, blowing trumpets and banging drums. 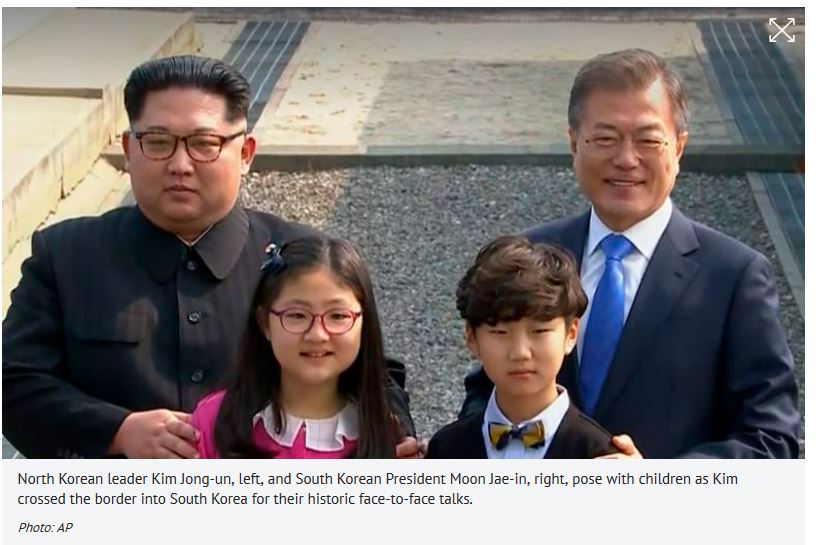 Kim and Moon posed for photographs with two children, Kim dressed in a black Mao suit, and Moon in a western suit with blue tie.

Moon met Kim’s delegation, and was warmly greeted by his younger sister Kim Yo Jong, who had paved the way for the historic summit with her attendance at the Olympics.
Kim said at the start of the meeting: “I made up my mind to do my best to resolve the issues we face and work together.”