BZ: the “Health Experts”, 1,200+ of them, say marching in protests is good for your health… Excellent, everyone hold peaceful protest gatherings with all the groups you want to connect with and you can stand in your sovereignty and constitutional rights, unwinding and unbinding more of the system using their new twist against them and not you. Peaceful protests in church, at the park, family reunion, dog sports, funerals, boating… Be creative and Stand ALL in to waking up :- ) 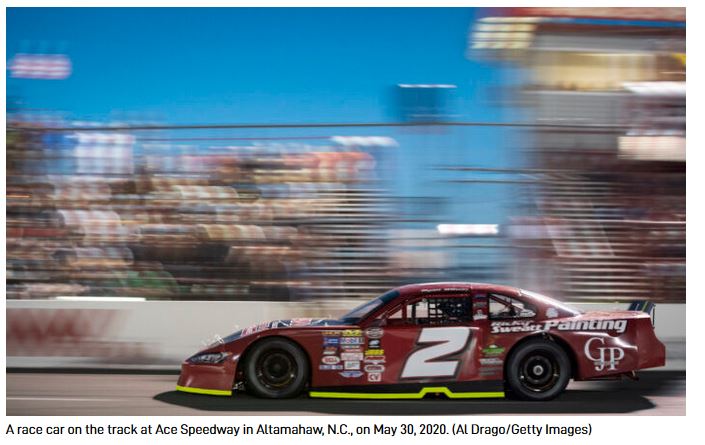 A North Carolina speedway drew a crowd of more than 2,000 spectators Saturday in defiance of the state’s COVID-19 restrictions after declaring the race a “protest.”

The office of North Carolina Gov. Roy Cooper warned Ace Speedway in Altamahaw earlier last week that a crowd of more than 25 would violate the state’s Phase 2 restrictions, imposed to curb the spread of the deadly bug.

Yet Cooper has also exempted “activities constituting the exercise of First Amendment rights” from all the requirements of his executive order, which appears to give the speedway legal cover to

WFMY reporter Amanda Ferguson shared a photo of a sign from management outside the speedway, which said, “This Event is held in Peaceful Protest of Injustice and Inequality Everywhere.”

Alamance County Sheriff Terry Johnson, in comments to the Charlotte Observer, said he received a letter Friday from Cooper’s office calling on Johnson to enforce the restrictions, for which the sheriff had words of criticism.

“This is totally politically motivated,” Johnson told the Charlotte Observer in an interview, “and I don’t like that one doggone bit.”

Johnson earlier objected to calls to prevent Ace Speedway from holding its 2020 season opener on May 23.

“When I took my oath of office, I swore to uphold the United States Constitution. I will not enforce an unconstitutional law. Upon hearing the opinion of the county attorney, I do not intend to stop ACE Speedway from opening on Saturday, May 23,” Johnson said, according to a statement by Alamance County authorities.

Ace Speedway has now allowed thousands of fans to attend three races at the track.

“It is dangerous and reckless to try and draw a crowd and I hope and pray that no one gets sick or even dies from that gathering,” Cooper said at a May 26 news conference, according to Fox8.

The race track’s Facebook account posted a message thanking fans who attended the opener, saying it would take some steps to prevent the spread of COVID-19: “Today we clean and sanitize the facility and will continue forward with our 2020 season.”

At the race this Saturday, WFMY’s Ferguson posted a video from the scene showing staff wearing masks performing temperature checks on people before letting them enter.

The Alamance County Sheriff’s Office said it is “evaluating the events” surrounding the holding of the race this Saturday.

Johnson earlier said that he believes the exemptions in Cooper’s executive order make a strong case to allow people to attend races at the Altamahaw track.

“Worship, religious, and spiritual gatherings, funeral ceremonies, wedding ceremonies, and other activities constituting the exercise of First Amendment rights are exempt from all the requirements of this Executive Order,” an explainer to Cooper’s Executive Order No. 141 reads (pdf).

“People have a right to assemble, the way this order reads, at the raceway or anywhere else,” Johnson told the Charlotte Observer.

“Ace Speedway has continuously and flagrantly violated the plain and unambiguous language of the Phase 2 order,” the letter from Cooper’s office said, as cited in the report. “Those violations pose a serious risk to the health and people of Alamance County and throughout the state.”

Johnson suggested Cooper’s own behavior reflects a double standard. The sheriff said the governor took part in a recent demonstration in which “he marched in the streets in Wake County in Raleigh with 2,000 people side-by-side with no mask on his face.”

Ahead of the season opener at Ace Speedway, the Alamance County government released a statement saying it would not block the event and listed steps the race organizers had taken to help curb the spread of COVID-19.

“Ace plans to implement several precautions, including screening attendees and providing rosters to the Health Department to facilitate contact tracing,” it said.

Other steps include maintaining 10 feet distance between each car in the pit area, marking off areas in the stands to support social distancing, recommending masks for crews, and providing hand sanitizer at a minimum of 10 stations.