NON-CONSENT…. HOW DEEP DOES YOUR UNDERSTANDING RUN? 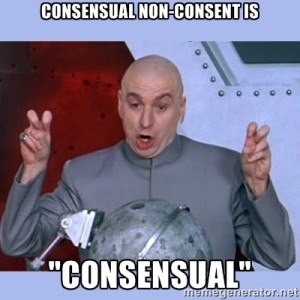 NON-CONSENT…. HOW DEEP DOES YOUR UNDERSTANDING RUN?

by Bradley Loves, published on Love Truth, on February 5, 2016

The more time passes now…, the more able I am to “see” and sense into the so-called higher levels.  These “levels” are not so much higher…, as they are simply finer and of a different frequency.

What I mean by the above statement is that the more time passes…, the more the “unseen” levels reveal themselves to my perception overall.

The lower unseen levels are absolutely filled with beings who want to control…, who want to dominate…, and who actually feed off of the energy of human beings.

Believe me when I say that it is anything but pretty!

Because “we” who are living here on the planet are currently in a state of forgetfulness or amnesia (perhaps a better word)…, there are countless parasites lurking about who are desperate for an “energetic meal”…, and even go so far as to “stimulate” whatever emotion in an unsuspecting human that will feed them the most tasty meal.

Call them beings of opportunity…, call them scavengers…, call them what you will…, they are PARASITES.

They are nothing but bottom feeders and fallen ones.

The reason that our “amnesia” factors into this equation, is that while we continue to not remember who we are…, or why we are here…, we are complacent about what surrounds us…, and therefore are basically DEFENSELESS against this unseen and ongoing ATTACK!

We have given into the fairy tale belief that it is all roses and peaches everywhere but here!

What we don’t realize is that we are really in the middle of a shooting range, and it’s been declared OPEN SEASON on humans!
Those beings who are pulling the “triggers” so to speak, are for the most part UNSEEN by our physical eyes! Not all of them want to kill us by the way…, but they all (every one of them) most certainly want to FEED ON OUR ENERGY.

Just like those pesky mosquitoes who bite and bite and would suck the blood out of a particular human for days if they could…, these UNSEEN beings feed on emotional DISTRESS.

The window of opportunity that they have is a slim one…, and they know it all too well.

They can not do ANYTHING to us without first telling us…, or getting our consent to their attacks in some way!
But just like any other being who wants to feed…, they will most certainly will do whatever it takes to get a meal!

Deception is their greatest tool! Another is their ability to operate on a level that is just outside of our range of sight!

Among the masses of humans who live here on the Earth.., there are those among us who are very weak in discipline, morality, courage and other divine attributes.

They are basically lazy, under achievers…, who have no real moral fiber and what they especially lack is courage!
Just like school yard bullies…, they run in packs for protection…, and are terrified of their own shadows.

What they crave most in life is POWER over others…, and even POWER over the universe in order to stop themselves from being so terrified of their own shadow and their lack of ability.

It is THESE men and women (and yes there are alot of them) who have learned how to commune with the unseen beings and have actually chosen to SERVE the unseen beings in order to benefit from that service personally!

They have committed and are committing daily TREASON against the human race by these horrible agreements and misplaced loyalties!

The problem for these hapless humans is that the more they BETRAY their own species…, the less and less their hearts and souls function normally…, and the more and more they turn into complete and total psychopaths and sociopaths!

At this low level…, they are broken totally…, and usually can NOT be brought back into normal human relationships.  They are gone.

This is going on as we speak!

The higher the energy gets on Earth…, (for me) the clearer and clearer I can see, feel, and sense these parasitic beings that are operating just beyond our site and what they want…, and how they operate.

Now for the good news!  It’s something that I have learned through experience.

They can NOT hurt you without your consent!

However…, don’t stick your head in the sand just yet…, because I’m not finished with my personal revelation.

They can not hurt you without your consent…, BUT…, for the most part…, you’ve already given it to them and you don’t even know it!

As I’ve said…., these parasitic beings are working “with” many of the sociopathic humans that I told you about earlier.

They have been working with them for many hundreds if not thousands of years!
This is the problem.

By taking instructions from the dark beings…, by learning the ways of DECEPTION…, those who lack moral any fiber have enacted laws, deceptive CONTRACTS, and false teachings in such a way that without really knowing WHAT you are doing…, you have basically SIGNED CONTRACTS and AGREED in ways you don’t understand…., to allow yourself to be fed upon!!!!!

I can not state it any more plainly than that!

NO…., They can NOT hurt you without your consent…, but without knowing it…

YOU ALREADY GAVE YOUR CONSENT!

This is why they world looks the way it does at this time.

The only thing you can do now…, since you’ve been conned, hoodwinked and fooled into giving them consent to feed on you…,   the ONLY THING…, is to be very adamant…, and to daily remove your consent to what these unscrupulous UNSEEN beings want to do to you…, which is to feed on your energy.

I have been doing that for the last year and a half…, and I can tell you that it is WORKING.

Far beyond your ability to believe that it is true…, your previous “consent”, oaths, and pledges you took to your “religion”…, your government, and your organizations is exactly what ALLOWS BAD THINGS to happen to you.

You made CONTRACTS that had “fine print”…., and you did not realize how “high up” the unseen ladder your OATH was going.

By removing and revoking all oaths, pledges, covenants, agreements, and contracts…, you actually FREE YOURSELF from potential bad experiences.

I know for a fact that I have.

Many times there are cops laying in wait just to give a ticket…, and I have felt the desperation of the unseen beings trying to ruin my day and pull from me emotional distress…, ONLY to have to “back off” at the last moment when I reaffirmed that I refused to consent to their dark plans.

You would be amazed to see just how “things” are being choreographed on a “higher level”.

I have seen for certain that it is NOT GOD who brings us any “bad” experiences…, but instead it is these stupid and useless beings who want to feed off of the tears and the pain caused to us by having something bad happen to us.

By reaching up into the UNSEEN LEVELS and “commanding” them to stand down…, and rebuking these DEMONS…, only then “must” they leave you alone.

I have found through my experimentation over the last year and a half…, that the EARTH is not for whimps!

The Dark loves whimps and those who easily give in and take whatever comes their way. They love it because without any resistance…, all of the deceptive contracts, oaths, pledges and covenants GIVE THEM PERMISSION to hurt you.

GOD has never and will never demand a CONTRACT from you!  There is no such thing on GODS level!

Only those beings who are in service to the ARCHONS talk about contracts.  That is why all Bankers and Businessmen use CONTRACTS.

IF you have heard channeled entities talking about CONTRACTS…, then those beings…, no matter how Angelic they claim to be…,  ARE IN SERVICE TO THE DARK!

GOD does not do CONTRACTS.

GOD gave us FREEWILL…, and to ask of us a CONTRACT…, is directly opposed to the gift he gave us eternally.

KNOW THIS…, and then set yourself free.

Now the second thing that you can do is to get your head out of the sand…, and to realize WHICH HUMAN BEINGS…, are in fact “working” for and with these unseen beings.

IF you are having trouble with figuring this out…, just look to positions of power and positions of AUTHORITY and who is filling them at this time!

Those who are making the most draconian and restrictive laws in every country…, and are desperate to cause as many problems to humanity as possible…., are the very ones who have joined the SATANIC CLUB.

In these positions…, they are very useful to the “unseen” beings…, because they create chaos and mistrust through WAR…, and pit one human being against another to cause MAXIMUM EMOTIONAL DISTRESS.

Because these men and women help to create the emotional distress on the Earth that feeds the unseen beings…, they are rewarded!

It is high time that you sharpen your “pencil” of NON CONSENT.

The way you do that is to REVOKE every contract…, and every oath…, every covenant, and every pledge that you have ever made to Earthly groups…, because it is these very oaths, pledges, promises and contracts that have given the unseen beings the RIGHT…, to feed off of you!

4 Comments to “ NON-CONSENT…. HOW DEEP DOES YOUR UNDERSTANDING RUN?”