‘No turning back’ on Brexit as Article 50 triggered

‘No turning back’ on Brexit as Article 50 triggered

Britain’s departure from the EU is “an historic moment from which there can be no turning back”, Theresa May has said.

A sombre-looking Mr Tusk said it was not a “happy day” for him or the EU.

The European Parliament warned security cooperation was not on the table as it fired its opening salvo in what are expected to be tough negotiations.

In her letter to Mr Tusk triggering Article 50 of the Lisbon Treaty, Mrs May said failure to reach a trade deal within the two-year time limit could “weaken” cooperation in the fight against crime and terrorism.

But Guy Verhofstadt, the European Parliament’s chief Brexit negotiator, said he would not accept any attempt to “bargain” between trade and security, adding: “I think the security of our citizens is far too important to start a trade off from one for the other.”

In an interview with the BBC’s Andrew Neil, to be aired at 1900 BST on BBC One, Theresa May said on security that she “would like to be able to maintain the degree of co-operation on these matters that we have currently”.

On the shape of a likely trade deal with the EU, she said: ‘What we’re both looking for is that comprehensive Free Trade Agreement which gives that ability to trade freely into the European single market, and for them to trade with us.

“It will be a different relationship, but I think it can have the same benefits in terms of that free access to trade.”

Article 50 of the Lisbon Treaty gives both sides two years to reach agreement so, unless the UK and the 27 remaining EU member states agree to extend the deadline for talks, the UK will leave on 29 March 2019, a Friday.

At a press conference in Brussels, Donald Tusk held up Mrs May’s letter, saying: “We already miss you.”

In a brief statement, he said it was not “a happy day” for him or for the EU and promised to begin arrangements for the UK’s “orderly withdrawal”.

He said the EU’s aim in negotiations was “damage limitation” and to “minimise costs” for EU citizens, businesses and member states.

In a statement in the Commons, Theresa May said: “Today the government acts on the democratic will of the British people and it acts too on the clear and convincing position of this House.”

She added: “The Article 50 process is now under way and in accordance with the wishes of the British people the United Kingdom is leaving the European Union.

“This is an historic moment from which there can be no turning back.”

She said Britain would now make its own decisions and its own laws and “take control of the things that matter most to us – we are going to take this opportunity to build a stronger, fairer Britain, a country that our children and grandchildren are proud to call home”.

She told MPs that this marks “the moment for the country to come together”.

Mrs May said it was a “moment of celebration for some, disappointment for others” and promised to “represent every person in the whole United Kingdom” during the negotiations – including EU nationals, whose status after Brexit has yet to be settled.

She said that while the UK would remain the “best friend and neighbour” to its EU partners, it would also look beyond the borders of Europe, saying the country can “look forward with optimism and hope and to believe in the enduring power of the British spirit”.

“I choose to believe in Britain and that our best days lie ahead.”

A six page letter from Mrs May triggering Article 50 was handed to European Council President Donald Tusk by the UK’s ambassador to the EU Sir Tim Barrow.

Focus on May’s letter to Tusk 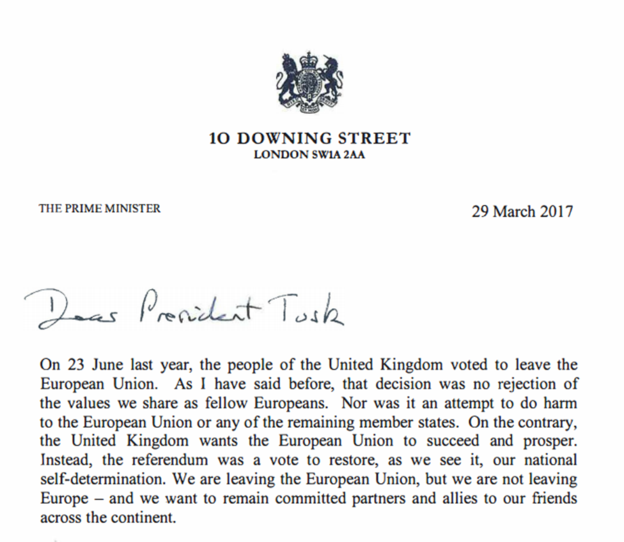 Read the letter in full 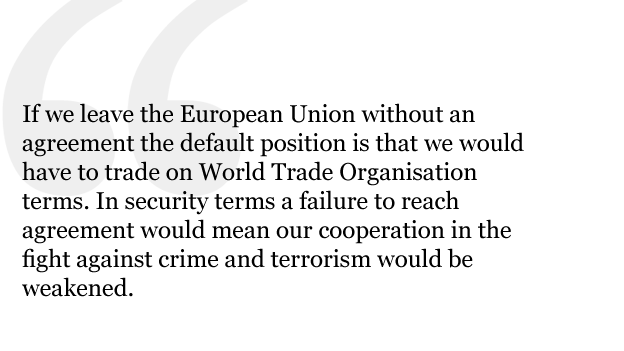 Alex Forsyth’s analysis: “In this section the prime minister is attempting to highlight the mutual benefits to both the UK and the EU of reaching an agreement about their future relationship – and warning of the dangers if that doesn’t happen. It’s a carrot rather than a stick, albeit one that comes with a health warning.”

In a leaked draft position paper, the European Parliament, which has a final say over any deal struck with Britain, says Brexit could be revoked, despite opposition from the EU chief negotiator Michel Barnier to making references to the reversibility of the process.

It also suggests that the European Court of Justice, the EU’s top court, will be the “competent authority for the interpretation and enforcement of the withdrawal agreement”.

MEPs also insist that any trade deal between the UK and the EU can only be struck after Britain has left.

German Chancellor Angela Merkel has rejected Mrs May’s call for negotiations on the UK’s exit from the EU to run in parallel with talks on defining their future relationship.

“The negotiations must first clarify how we will disentangle our interlinked relationship… and only when this question is dealt with, can we, hopefully soon after, begin talking about our future relationship,” said Mrs Merkel in Berlin.

There is also likely to be a big row over outstanding debts the UK will have to pay when it leaves. Theresa May promised a “fair settlement” – the EU wants £50bn.

Labour leader Jeremy Corbyn said his party would “back” Mrs May if she meets his party’s tests on the Brexit deal – including full access to the single market and protection for workers’ rights.

Liberal Democrat leader Tim Farron, who opposes Brexit, said Mrs May was “twisting the will of the people, leaping into the abyss without any idea of where our country will end up”.

“It is a tragedy that Labour are helping the Conservatives in doing this damage to our country,” he added.

The SNP accused Theresa May of breaking a promise to secure a UK-wide agreement before triggering Article 50 – and took a swipe at the prime minister’s claim that “now is not the time” for another Scottish independence referendum.

The party’s foreign affairs spokesman Alex Salmond said: “After nine months of this prime minister’s approach to Brexit Northern Ireland is deadlocked, the Welsh are alienated, Scotland is going for a referendum, the English are split down the middle, and Brexit MPs are walking out of Commons committees because they don’t like home truths.

“Has the prime minister considered, in terms of invoking Article 50, that ‘now is not the time’?”

Negotiations with other EU nations are expected to begin in mid-May.

On Thursday the government is expected to publish details of its “Great Repeal Bill”, which aims to convert EU law into domestic legislation and repeal the European Communities Act, which says EU law is supreme to the UK’s. 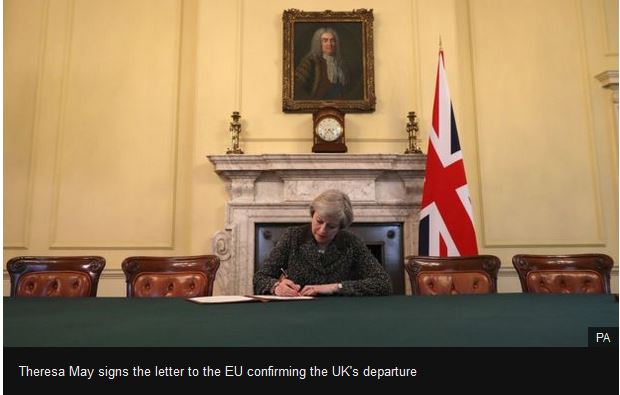 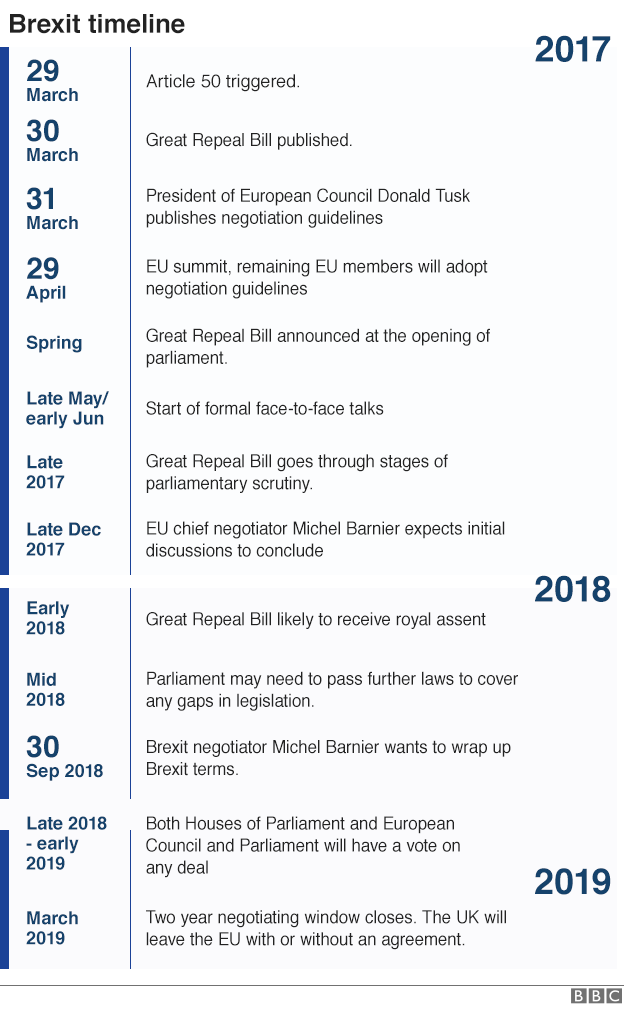