bz: I sent this article to HATJ, when I was queuing it up for a scheduled post and here is her email reply 🙂

To: bz riger (bzriger@gmail.com)
From: 1369008: HEATHER TUCCI-JARRAF
Subject: RE: Finland basic income trial
Date: 4/29/2018 8:11:38 AM
lol…yes, they experienced EXACTLY what I told them they would if they tried such a scheme… they thought if they gave the being a dribble, they could access and use the rest… their suppositions were proven incorrect 🙂

love all… all love

p. s. my particular gratitude and love to Yanis on this specific matter, too! 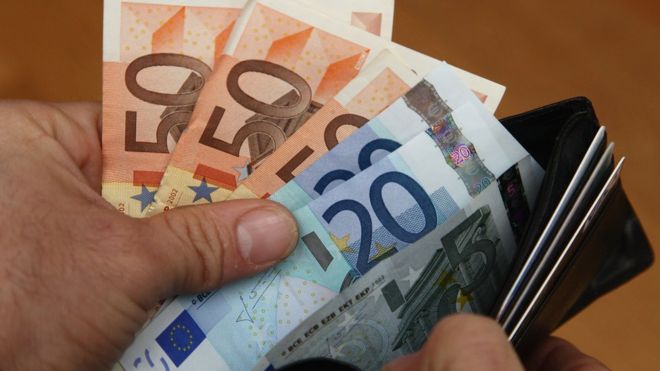 The Finnish government has decided not to expand a limited trial in paying people a basic income, which has drawn much international interest.

“The eagerness of the government is evaporating. They rejected extra funding [for it],” said Olli Kangas, one of the experiment’s designers.

Some see basic income as a way to get unemployed people into temporary jobs.

The argument is that, if paid universally, basic income would provide a guaranteed safety net. That would help to address insecurities associated with the “gig” economy, where workers do not have staff contracts.

Supporters say basic income would boost mobility in the labour market as people would still have an income between jobs.

Finland’s two-year pilot scheme started in January 2017, making it the first European country to test an unconditional basic income. The 2,000 participants – all unemployed – were chosen randomly.

But it will not be extended after this year, as the government is now examining other schemes for reforming the Finnish social security system.

“I’m a little disappointed that the government decided not to expand it,” said Prof Kangas, a researcher at the Social Insurance Institution (Kela), a Finnish government agency.

Speaking to the BBC from Turku, he said the government had turned down Kela’s request for €40-70m extra to fund basic income for a group of employed Finns, instead of limiting the experiment to 2,000 unemployed people.

In a statement later, Kela stressed that the pilot would run its full course to the end of this year. “There are currently no plans to continue or expand the experiment after 2018,” it said.

The pilot’s full results will not be released until late 2019, once its impact on participants has been assessed.

Another Kela researcher, Miska Simanainen, said “reforming the social security system is on the political agenda, but the politicians are also discussing many other models of social security, rather than just basic income”. 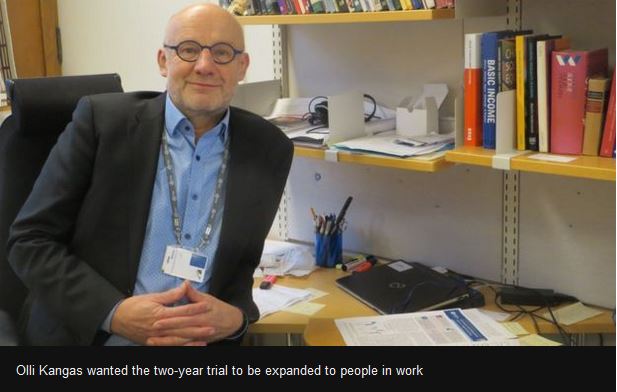 When Finland launched the experiment its unemployment rate was 9.2% – higher than among its Nordic neighbours.

That, and the complexity of the Finnish social benefits system, fuelled the calls for ambitious social security reforms, including the basic income pilot.

OECD finds drawbacks
In February this year the influential OECD think tank said a universal credit system, like that being introduced in the UK, would work better than a basic income in Finland. Universal credit replaces several benefit payments with a single monthly sum.

The study by the Organisation for Economic Co-operation and Development said income tax would have to increase by nearly 30% to fund a basic income. It also argued that basic income would increase income inequality and raise Finland’s poverty rate from 11.4% to 14.1%.

In contrast, the OECD said, universal credit would cut the poverty rate to 9.7%, as well as reduce complexity in the benefits system.

Another reform option being considered by Finnish politicians is a negative income tax, Prof Kangas said.

Under that scheme, people whose income fell below a certain threshold would be exempt from income tax and would actually receive payments from the tax office.

The challenge is to find a cost-effective system that incentivises people to work, but that does not add to income inequality, Tuulia Hakola-Uusitalo of the Finnish Finance Ministry told the BBC.

What do others say about basic income?
Some powerful billionaire entrepreneurs are keen on the idea of universal basic income, recognising that job insecurity is inescapable in an age of increasing automation.

Y Combinator will select 3,000 individuals in two US states and randomly assign 1,000 of them to receive $1,000 per month for three to five years. Their use of the unconditional payments will be closely monitored, and their spending compared with those who do not get the basic income.

In 2016, Swiss voters overwhelmingly rejected a proposal to introduce a guaranteed basic income for all.

Update 26 April 2018: This article has been amended to clarify the future of the basic income pilot in light of a new statement from Kela.

1 Comment to “ No plans to expand Finland basic income trial”