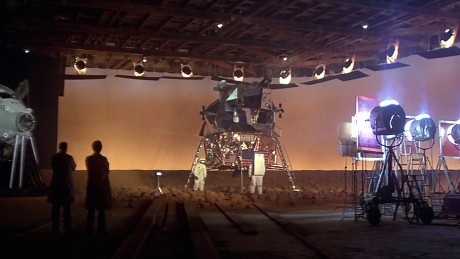 Charles Lindberg was the first person to fly alone nonstop from New York to Paris in an airplane. He did so in 1927.  If there is one thing that can be said of advancements in science, it is that technology does not go backwards.  Technology only increases in greater capability, with less and less time to do so than the previous year, exponentially, as the years go by.

What if I were to tell you that in 1987, sixty years after the first solo nonstop flight from New York to Paris, with all of the advancements in technology and aviation since then, from open cockpit one passenger biplanes to high altitude cabin pressurized five hundred passenger 747’s, that NO ONE, with SIX DECADES more of technological advancements since 1927, was able to repeat Lindberg’s feat?  Would this be reasonable, given the steady pace of advancement in all of the sciences and technologies from 1927 to 1987 ?

What the United States government has asked the world to believe about last century’s “Apollo” moon missions is no different than this, with sixty years after 1969 being the earliest date set to “return” to the moon, at date which has already been pushed a decade farther into the future FOUR TIMES before by NASA, and based on this track record, may very well be pushed farther into the future yet again.

It confuses many people that the most difficult aviation accomplishment in the entire history of flight was not only done successfully on the very first attempt (something which had never happened before or since in the entire history of aviation, not even for far much less intricate endeavors than this, much less the most complicated one ever imagined), that it was also so easily accomplished with the extremely rudimentary computer and rocket technology of the 1960’s, knowing too that no one, from any nation on Earth, including the one that claimed the accomplishment in 1969, has been able to duplicate the event since then, or has any capability to do so, until at least sixty years after the incredible claim. 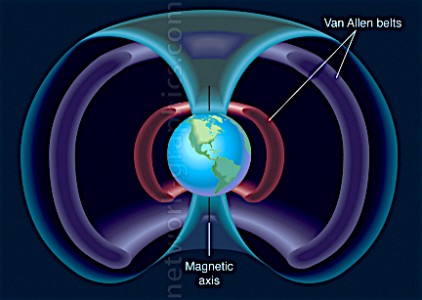 Here in the 21st century, there have been at least a dozen catastrophic failures, from various parties, simply trying to put a rocket into earth orbit, which is 1/1000th the distance to the moon, with nearly five decades of technological advancements since the “Apollo” missions.  Thusly, you can see the ambiguity of NASA’s moon landing claim, being so easy accomplished on the very first attempt with antiquated 1960’s technology, going a thousand times farther than the most modern manned space vehicle can travel today, when the originally claimed accomplishment cannot be repeated today by any nation on Earth, even with a half a century of more advancements in aviation and computer technology.

Unbeknownst to most American citizens, at about 1000 miles above the surface of the Earth, which is 750 miles above where the international space station presently orbits at just 250 miles, lay bands of lethal radiation, nearly 30,000 miles thick, called the “Van Allen Radiation Belts”, humbly named after their founder, Dr. James Van Allen, who discovered the radiation belts in 1958 by putting a Geiger counter (radiation meter) on an unmanned probe launched toward this region of space. The radiation belts are a collection of intense radioactive particles, mostly from the sun, which have collected around the Earth ever since its creation, and are permanently held there in place by the Earth’s magnetic field. The only time humans have ever claimed to have gone through this dangerous radiation field is during the “honorable” Nixon administration from 1969 to 1972, a course of travel necessary to reach the moon and return. All other manned space flights, of all time, except for the “Apollo” missions, were well below this dangerous radiation, in low Earth orbit, the very place where the space station presently safely resides.

Twenty-five years later after, in 1997, when the space shuttle flew to its highest altitude ever, 380 miles, the record-breaking shuttle crew made an alarming discovery when their safety instruments notified them of the approaching radiation danger, though it was still 620 miles away. So severe was the radiation, even at more than 600 miles distance, that NASA never sent the shuttle to this hazardous altitude ever again. Because of this encounter, CNN reported at the time . . .

“The radiation belts surrounding Earth are MORE DANGEROUS THAN PREVIOUSLY BELIEVED.” (“Previously believed” being the knowledge gathered by the “Apollo” moon missions, the only ones ever to have claimed to have successfully traveled through the radiation belts.)

The question is, how could a space shuttle crew, 620 miles below the beginning of the radiation belts, have a greater knowledge of the radiation belts, from 620 miles away, than the “Apollo” crews did who claimed they were in the very heart of them eighteen times for twenty-four total hours? The only way this could happen is if the “Apollo” missions never left Earth orbit and orbited themselves well below the shuttle’s record of 380 miles, most likely at about 250 miles. This means that the “Apollo” launches and splashdowns were real, they just never left Earth orbit and the CIA falsified the rest.

In the now infamous documentary “A Funny Thing Happened on the Way to the Moon” (linked below), this is exactly what newly discovered unedited footage of “Apollo” astronaut outtakes shows, the crew blatantly falsifying the cinematography of allegedly being half way to the moon, when they were in fact still in Earth orbit, all the while receiving clearly heard private directives from a third clandestine party over a confidential audio channel, telling them to wait four seconds after hearing from NASA before replying, in order to create the false impression of an increased radio delay as if they were further from the Earth than they really were.

In a 2008 article published by Reuters (link below), the National Academy of Sciences, a nonprofit think-tank which serves as a technical advisor to NASA, stated that “returning” to the moon would not be possible UNTIL AFTER the technology is developed IN THE FUTURE to protect astronauts from lethal space radiation!

Confusing the issue further, is a new young generation of NASA scientists, born after the “Apollo” missions, a spokesperson for which, Kelly Smith, publicly remarked in 2014 (link below) saying the VERY SAME THING as the National Academy of Sciences, that the Van Allen radiation belts contain “Dangerous Radiation” and that . . .

“NASA must FIRST solve this challenge BEFORE we send people through this region of space.“

Seeing how Smith just admitted that the technology needed to solve the radiation problem of successfully sending astronauts survivably through this dangerous region of space has YET to be invented, unless the “Apollo” crews had a time machine to access this future and still yet developed technology, they could not have possibly gone through this dangerous region of space and survived it as they previously claimed.

This statement from the new generation of NASA scientists, who were born after the “Apollo” missions, is NASA’s own indirect admission that the “Apollo” flights could not have scientifically taken place five decades ago, as the technology necessary to protect the crews from radiation beyond the safety of Earth orbit has YET to be invented.

I applaud their admission, love for the truth, and scientific integrity.

In a recently uncovered 1958 paper written by Dr. James Van Allen, for whom the radiation belts are named for their discovery (link below), after successfully launching unmanned probes with Geiger counters onboard into this region of space to measure radioactivity, Dr. Van Allen himself testified that the radiation belts are DEADLY TO ASTRONAUTS.  Regarding the necessary travel through them to reach the moon and return, Dr. Van Allen said . . .

“Our measurements show that the maximum radiation level is between 10 and 100 roentgens per hour.  Since a human being exposed for two days to even 10 roentgens would have only a 50% chance of survival, the radiation belts obviously present an obstacle to space flight beyond earth orbit.  Rockets will need to take off from the radiation free zones at the north or south poles in order to reach the moon.”  (There are “doughnut” shaped radiation free “holes” in the belts just above the north and south poles.)

A few years later, under pressure from the White House because of the administration’s inability to build weather sensitive launch centers in such frigid arctic conditions, Dr. Van Allen recanted his testimony and these scientific findings of the deadly radiation readings, in order to make the “Apollo” missions appear feasible.  Nevertheless, these recently uncovered historical Geiger counter readings from 1958 speak for themselves and do not lie, even if men later do.

I understand the fascination and marvel with space flight.  I am a big fan of it myself.  At the same time, as with anything overly adored, the object of one’s infatuation can take advantage of this entranced state of their admirer and feed them, unwittingly, false flattery that is sincerely mistaken as factual.

The United States government, and the Nixon administration in particular, which was at the helm during the whole “Apollo” endeavor, had a proven track record of falsification, during this very hour of American history.  In fact, the CIA, NSA, and former defense secretary Robert McNamara admitted, many decades later to the Senate Foreign Relations Committee, that the entire Vietnam War was instigated because of an elaborate hoax of theirs known as the “Gulf of Tonkin Incident” (link below), which was an entirely fabricated attack by the North Vietnamese against the United States, created to garner public support for the unpopular war.

It is my belief, that when domestic civil unrest about the Vietnam War was ready to oust the newly installed Nixon administration, another event was also contrived by the CIA as a patriotic distraction and Cold War boast to the Soviet Union, that of a successful moon mission, the success of which could only be guaranteed by staging it safely below the lethal radiation belts.

Just as there are bases at the South Pole, despite nearly 100 degrees below zero temperatures and 100 mile per hour winds, there because it is technologically possible, if it were humanly possible to put men on the moon, there would be scientific bases there right now.  The fact that there are not, is proof itself that it cannot yet be done . . . much less, five decades ago.

“One of the saddest lessons of history is this:

If we’ve been bamboozled long enough,

we tend to reject any evidence of the bamboozle.

We’re no longer interested in finding out the truth.

The bamboozle has captured us.

It’s simply too painful to acknowledge,

that we’ve been taken.

Once you give a charlatan power over you,

you almost never get it back.”

“It is easier to fool people

than to convince them that they have been fooled.”