by Tyler Durden, published on Zero Hedge on December 27, 2017

To see the wayback machine copy of it click here 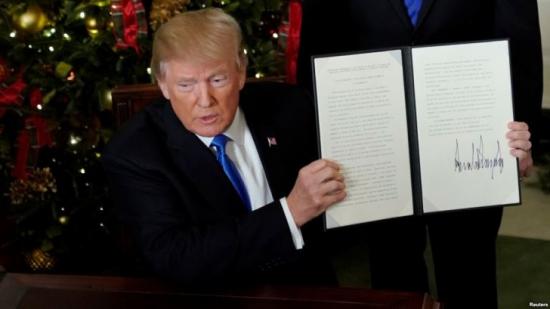 The Trump Administration quietly issued an Executive Order (EO) last Thursday which allows for the freezing of US-housed assets belonging to foreign individuals or entities deemed “serious human rights abusers,” along with government officials and executives of foreign corporations (current or former) found to have engaged in corruption – which includes the misappropriation of state assets, the expropriation of private assets for personal gain, and corruption related to government contracts or the extraction of natural resources.

Furthermore, anyone in the United States who aids or participates in said corruption or human rights abuses by foreign parties is subject to frozen assets – along with any U.S. corporation who employs foreigners deemed to have engaged in corruption on behalf of the company.

In fact, anyone in the world who has “materially assisted, sponsored, or provided financial, material or technological support for, or goods or services” to foreigners targeted by the Executive Order is subject to frozen assets.

The EO, based on the 2016 Global Human Rights Accountability Act, immediately added 13 foreign individuals to a list of “Specially Designated Nationals” (SDN) maintained by the Office of Foreign Assets Control (OFAC) – several of whom have ties to the Clintons, the Clinton Foundation, or Clinton associates (details below). Moreover, the Treasury Department sanctioned an additional 39 people,  for a total of 52 under the new order – including the son of Russia’s prosecutor general.

I, DONALD J. TRUMP, President of the United States of America, find that the prevalence and severity of human rights abuse and corruption that have their source, in whole or in substantial part, outside the United States, such as those committed or directed by persons listed in the Annex to this order, have reached such scope and gravity that they threaten the stability of international political and economic systems.

Last Week’s Executive Order could have serious implications for D.C. lobbyists who provide “goods and services” (e.g. lobbying services) to despots, corrupt foreign politicians or foreign organizations engaging in the crimes described in the EO. “Virtually every lobbyist in DC has got to be in a cold sweat over the scope of this EO,” said an attorney consulted in the matter who wishes to remain anonymous.

And because the phrase “person” means “an individual or entity” in the order – any US organization which merely employs a foreigner engaging in the listed offenses is also subject to frozen assets. “Consider, what would happen if Apple, say employed a foreign national who bribed a PRC official for government approvals? How about a hypothetical case of a company like Northrop or Boeing where an employee, or consultant, who is a foreign national bribes a Saudi official to direct government purchases of airplanes and military equipment? At least some or all of their assets could be frozen.”

Now consider that if reports from The Hill are accurate – an FBI mole deep within the Russian uranium industry uncovered evidence that “Russian nuclear officials had routed millions of dollars to the U.S. designed to benefit former President Bill Clinton’s charitable foundation during the time Secretary of State Hillary Clinton served on a government body that provided a favorable decision to Moscow (the Uranium One approval)” – a deal which would eventually grant the Kremlin control over 20 percent of America’s uranium supply right around the time Bill Clinton also collected $500,000 for a Moscow speech, as detailed by author Peter Schweitzer’s book Clinton Cash and the New York Times in 2015.

“The Russians were compromising American contractors in the nuclear industry with kickbacks and extortion threats, all of which raised legitimate national security concerns. And none of that evidence got aired before the Obama administration made those decisions,” a person who worked on the case told The Hill, speaking on condition of anonymity for fear of retribution by U.S. or Russian officials. –The Hill

The same FBI informant claims to have video evidence showing Russian agents with briefcases full of bribe money related to the controversial Uranium One deal:

In a report by Tucker Carlson, a former long-time executive of now-defunct D.C. lobbying firm, The Podesta Group – who has been interviewed extensively by FBI special counsel Robert Mueller, claims that Tony Podesta was “basically part of the Clinton Foundation,” frequently meeting with the charity to discuss the Uranium One deal. Meanwhile, Tony’s DNC operative brother John Podesta reportedly recommended that the Podesta Group hire David Adams – Hillary Clinton’s chief adviser at the State Department, giving them a “direct liaison” between the group’s Russian clients and Hillary Clinton’s State Department.

Hypothetically, if the Uranium One deal is deemed corrupt by the Trump administration, and “Russian nuclear officials” indeed routed millions of dollars to the Clinton Foundation, and Tony Podesta lobbied on behalf of the deal for the Clinton Foundation – it stands to reason that this Executive Order could freeze the US-housed assets of quite a few individuals. Of note, assets can be frozen with no prior warning, as trump has declared a national emergency due to the “scope and gravity” of the threat posed by said individuals.

To simplify this complicated legal document a bit, keep in mind:

Section 1. (a)(i-ii) outlines all foreigners the Executive Order applies to: 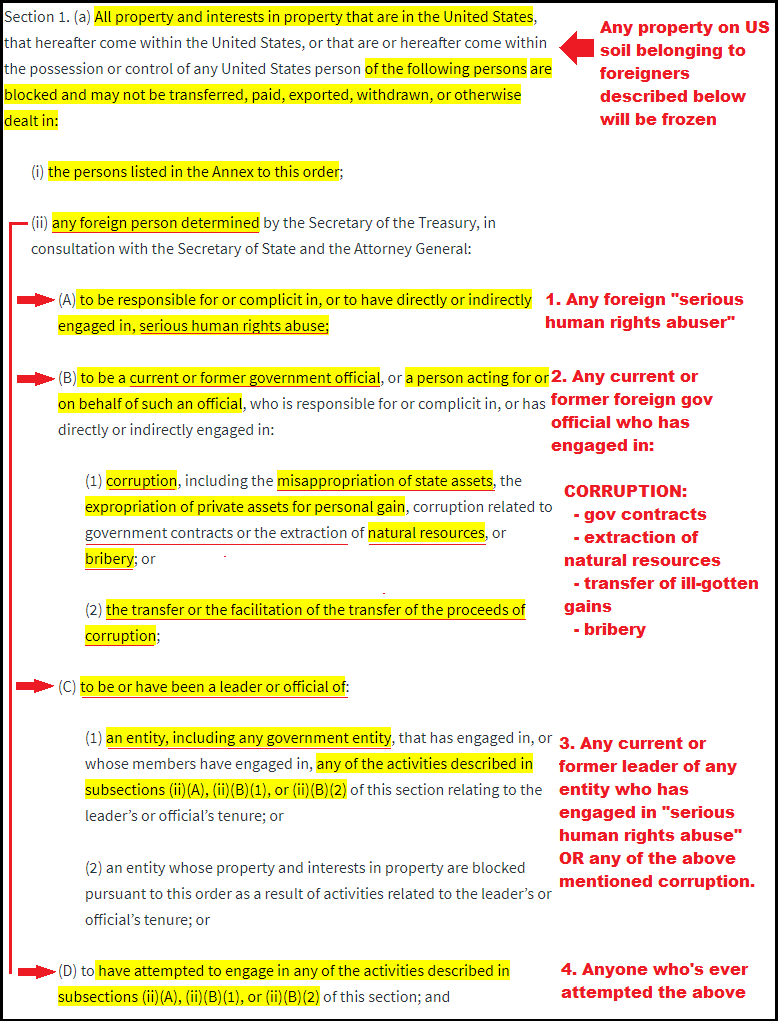 Section 1. (a)(iii) defines U.S. Citizens who have assisted foreigners in any of the crimes described above: 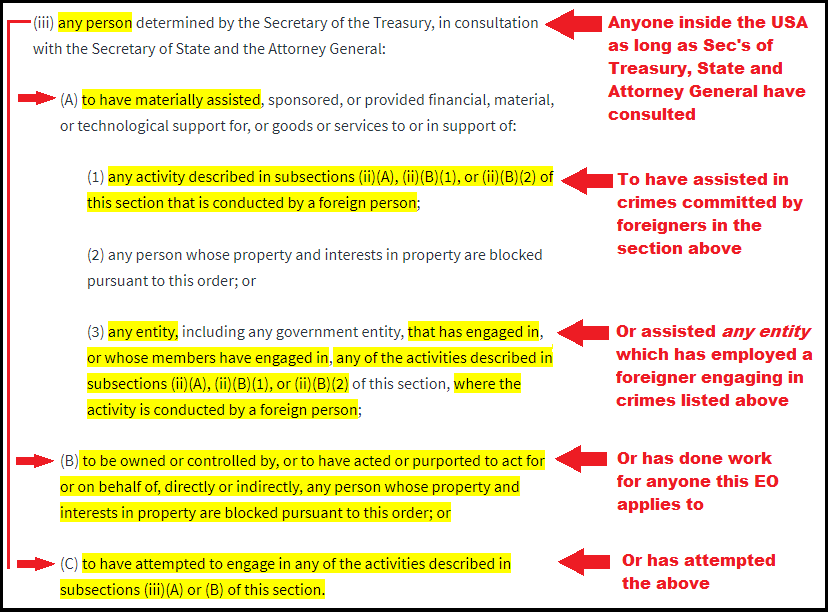 Note: The above section (iii)(A)(3) means any foreign person engaging in “serious human rights abuses” or listed forms of corruption on behalf of a U.S. entity. Also of note – Attorney General Jeff Sessions rolled back a series of Obama-era curbs on civil-asset forfeiture over the summer, strengthening the federal government’s ability to seize cash and property from Americans without criminal charges. That said, this Executive Order only freezes assets, it does not allow the government to take custody of them.

In regards to the 13 listed individuals targeted by this order – several of whom have ties to the Clintons, the Clinton Foundation or Clinton associates – we find the following:

In early 2016, Amsterdam-based telecom giant VimpelCom (now VEON) admitted to a conspiracy in which they paid millions in bribes to Karimova for entry into the Uzbek telecom market. In a series of related cases, the U.S. Justice Department has sought the forfeiture of $850 million in bribe money from various bank accounts across Europe. In July, Uzbek officials arrested Karimova for fraud, money laundering, bribery, and embezzlement and a variety of other claims.

In 2009, a WikiLeaks cable notes that Karimova set her sights on Bill Clinton to gain access to then-Secretary of State, Hillary Clinton.

Three years later, Karimova co-sponsored a 2012 Clinton Foundation fundraiser in Monaco. Hillary Clinton’s State Department was asked to weigh in on Bill Clinton’s contacts with Karimova. Pictured below with Bill Clinton at an AIDS charity event in Cannes, France. 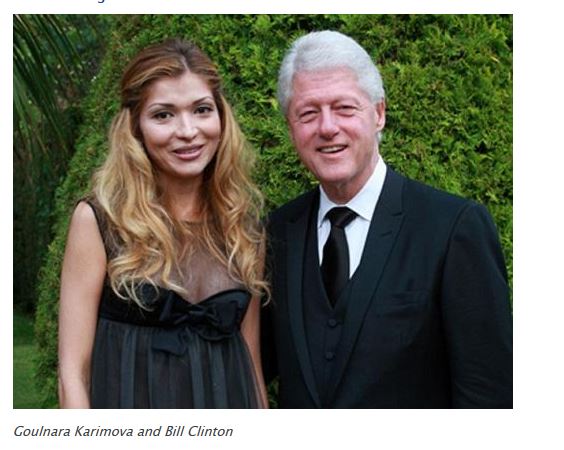 Dan Gertler is an Israeli billionaire mining magnate revealed by the Paradise Papers to be chief negotiator between the Democratic Republic of the Congo (DRC) and his primary business partner – mining company Glencore, founded by Marc Rich – who was pardoned for corruption by Bill Clinton on his last day in office after his wife gave $450,000 to the Clinton Library foundation. 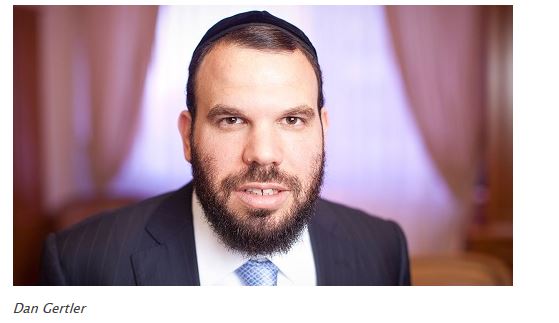 In 2001 Gertler gave $20m in cash to DRC President Joseph Kabila to use to buy weapons and fund his war against rebels to consolidate his grip on power. In exchange, Gertler’s company IDI was granted a monopoly on the DRC diamond trade, worth hundreds of millions a year. In 2013, Gertler sold the DRC rights to mine oil for $150 million, a 300x increase on an asset he   purchased from President Kabila 7 years prior for just $500,000.

In 2012, Kabila offered Bill Clinton $650k for a speech in the DRC – for which Clinton sought State Department approval – only to have his speaking agency recommend against the appearance which would require photos with the dictator.

Yahya Jammeh is the former President of Gambia who came to power in 1994 and stepped down in 2017. He has a long history of serious human rights abuses and corruption – creating a terror and assassination squad called the Junglers that answered directly to him. 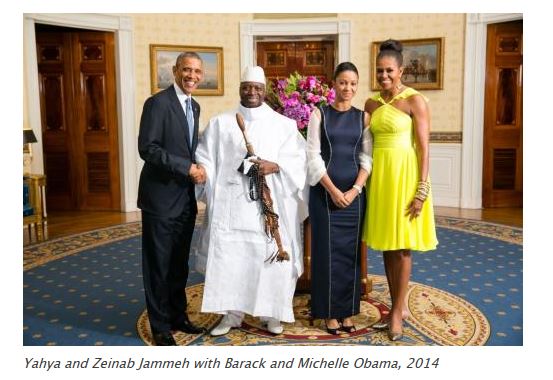 Benjamin Bol Mel; Sudan – Financial Advisor to South Sudanese President Salva Kiir and president of ABMC construction company accused of corruption. Hillary Clinton pushed for a waiver from the Obama Admin on the prohibition of military aid due to the use of child soldiers in South Sudan.

Mukhtar Hamid Shah; Pakistan – surgeon specializing in kidney transplants, believed to be involved in kidnapping, wrongful confinement, and the removal of and tracking in human organs from Pakistani laborers.

The rest of the 13 individuals have engaged in a variety of corruption and human rights abuses ranging from a Serbian arms dealer believed to be linked to a $95 million deal with Yemen, to government officials who ordered journalists murdered, to several instances of serious human rights violations. (h/t @HNIJohnMiller)

One wonders if perhaps the purpose of this Executive Order addressing serious human rights abusers and corruption – a national emergency, was intended to ensure the much talked about swamp renovation comes in ahead of schedule and under budget. We’ll know for sure if Treasury Secretary Steve Mnuchin starts freezing bank accounts after the holidays.