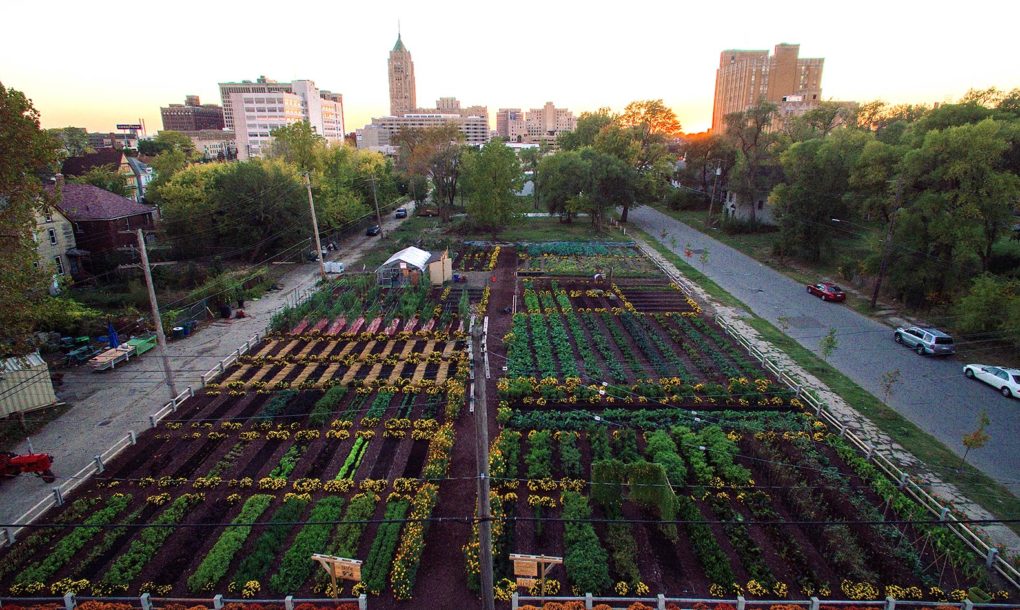 (NaturalNews) Urban renewal on a couple of acres in a northern section of Detroit, Michigan doesn’t mean fancy street signs, sprawling apartment complexes or bicycle lanes. It means a vision for clean food and sustainable agriculture to create a new kind of urban development called an “agrihood.” Parcels of land formerly in disarray are being dug up and retrofitted as an urban farm and more under the direction of the 501 (3) (c) group called the Michigan Urban Farming Initiative (MUFI).

As reported by Crainsdetroit.com, since 2011, when this all volunteer organization was started, 8000 volunteers have put in a total of 80,000 hours on their urban organic farm and produced over 50,000 pounds of free produce to “neighborhood residences, area churches and food pantries.”  Trueactivist.com reports that plans are also in the works to build  “3,200 square foot Community Resource Center,” which will serve as volunteer headquarters and a place to teach interested parties, especially children, about health, clean food and sustainable agriculture.  A 200 tree orchard and a health food café is also in the blueprints.

The group has attracted $4 million in corporate investment dollars from General Motors, BASF SE, Sustainable Brands for MUFI and surrounding neighborhoods in Detroit’s North End. Twenty-something MUFI co-founder Tyson Gersh explains that their mission is not just about using available land to feed families who are hungry. The money is coming, says Gersh, because the initiative is a “driving force in rethinking how urban spaces are developed.”

One problem MUFI is also tackling is urban blight, or abandoned houses and buildings in such disrepair that they need to be demolished. In one instance MUFI decided not to pay for the expense of removing the foundation. Instead they are retrofitting the basement to use it as a retention pond for crop water.  Additionally, a shipping container building will be constructed on site that will house an intern to manage the farm and do agricultural research.

The government of Detroit hasn’t quite figured out how to zone or manage future agrihoods.  Gersh was able to acquire the original property through an “adopt- a- lot” program and now they utilize “20 parcels from private owners and county foreclosure program.”  Approval for ancillary agrihood activities, or acquiring more land, means they need a “yes” from multiple government agencies like the Land Bank Authority, Detroit’s City Council and/or the Planning and Development Council. Detroitnews.com says those leaders will have this on their agenda early next year.