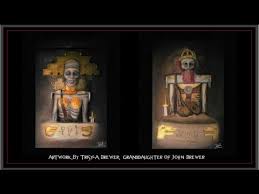 This video is about a Nephilim tomb of giant mummies with ancient records on metal plates that John Brewer found in the 1950’s. A few people have heard the stories about John Brewer and his ancient finds in Central Utah but they haven’t heard these stories. Utahna Jessop shares in this lecture what happened to Brewers Cave, what is still in the cave and the research that has been done to re-gain entrance into the cave. She also shares stories of other similar finds of ancient records and artifacts that were inside the tombs of where these giant mummies have been found and then suppressed. To learn more about the red haired giants of Brewers cave visit our forum at:
www.ancientlosttreasures.com