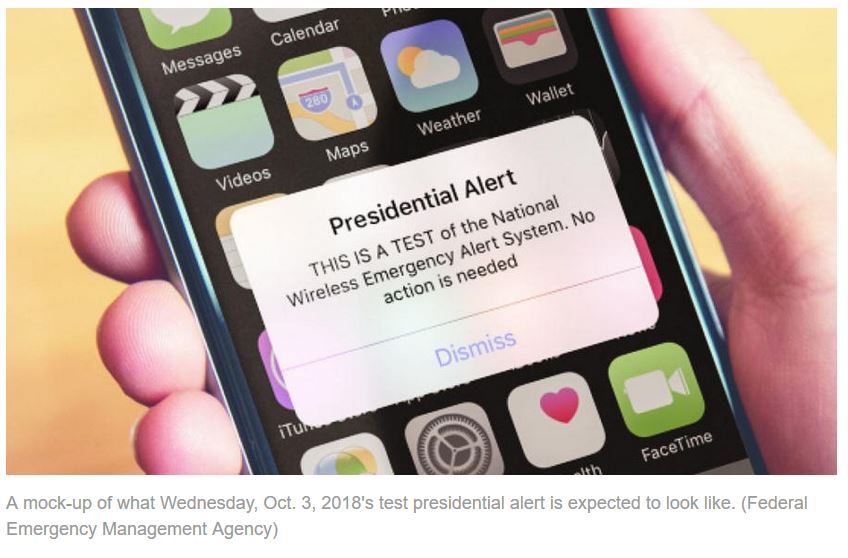 Expect phones across the country to be simultaneously alerted just before 1:20 p.m. on Wednesday, when federal officials conduct the first-ever test of the country’s emergency communications system with a presidential alert.

The alert will be a joint test of the Wireless Emergency Alert system and the Emergency Alert System, and commence at 1:18 p.m., according to a news release from state officials.

The countrywide test, a joint effort of the Federal Emergency Management Agency and the Federal Communications Commission, will use the same tone and vibration as tornado warning and AMBER Alert warnings.

The test originally had been scheduled for Sept. 20, but was postponed to Wednesday, its backup date, because of Hurrican Florence.

While the system was set up following an executive order signed in 2006 by President George W. Bush, the announcement last month that the test would be sent sparked some controversy, triggering the specter for some of President Donald Trump using the alerts the way he does Twitter. But that idea was dismissed by federal officials, who say the system has safeguards in place and is intended to notify Americans in hazardous situations including terrorism, war, or natural disasters.

“The test is intended to ensure public safety officials have the methods and systems to deliver urgent warnings and alerts to the public in times of an emergency or disaster,” said Acting Illinois Emergency Management Agency Director William Robertson. “Periodic testing is a way to access the operational readiness of the infrastructure and determine whether technological improvements are needed.”

While the Emergency Alert System has been tested before, the Wednesday test will be the first time the nationwide Wireless Emergency Alert system will be tested. This system is used to notify the public about “dangerous weather, missing children, and other regionally critical situations through alerts on cellular phones,” the release said. It would also allow most users to receive location-targeted notifications of “imminent threats to safety in their area,” officials furthered.

Cell phones that are turned on and within the range of an active cell tower are expected to receive the message. Some older phones, officials said, may not get the message.