In an apparent nationwide system outage, Bank of America customers have been shut out from accessing their accounts and online banking on Wednesday afternoon. As of 4pm ET the outage was continuing with most online systems still frozen.

On Downdetector.com reports starting spiking after 11:30 a.m. and the website was inundated with comments from Bank of America customers around the country saying they couldn’t access online banking from their applications or computers, transfer money or deposit money or checks.

Coral Springs resident Eric Sleeper told the Miami Herald that he received what looked like a phishing email from the bank Wednesday and immediately called customer service to see if something was wrong. A message on his online account said it could not pull up his information. When he called his local branch, a manager said that local managers were all calling each other trying to figure out what caused what now seems like a national outage and why they were unable to provide certain services.

Bank of America spokeswoman Jumana Bauwens told the Herald that the bank is aware of the issues with mobile and online banking and is working to fix the problem. Bauwens added that many of the customers who were experiencing difficulties now have accounts that are operating normally.

“I know that the team is working quickly to bring everything back up. As time progresses they should be able to go back online,” Bauwens said.

When asked what caused the outage, Bauwens said she “did not have that information.”

Surprisingly, nobody has yet voiced the theory that it was Russia’s crack hackers who are responsible.

Meanwhile, on Twitter, users across the country were reporting issues accessing their accounts.

“@BankofAmerica system wide outage on the day I’m closing on my house and there is nothing they can do about it,” tweeted Twitter user @CapricornLove7.

“The clerk at @BankofAmerica just said I can’t make a deposit [because] if [sic] a nationwide disruption. Anyone know what’s up?,” tweeted user @Henkenius. 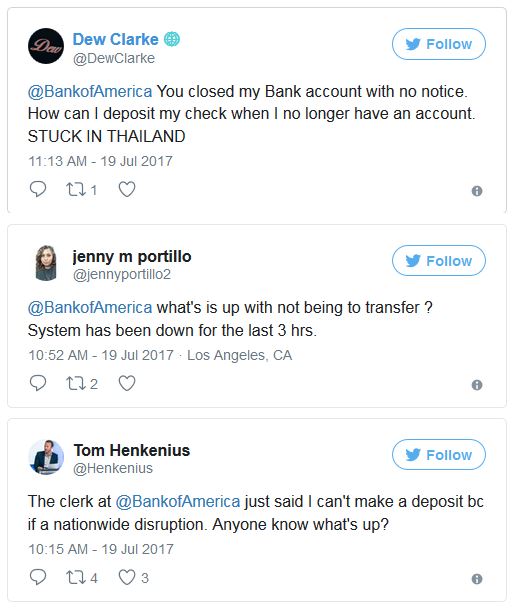