Ex-CIA officer Robert David Steele made the comments on The Alex Jones Show.

He claimed that children have been secretly shipped to Mars to work as slaves.

In response, a Nasa spokesman said that ‘there are no humans on Mars’.

Earlier this week, Nasa was forced to deny that it was soon to announce the discovery of alien life.

Nasa has been forced to deny a bizarre conspiracy theory that it is running a child slave colony on Mars.

The theory was cooked up by an ex-CIA case officer who made the wild allegations on a US national radio show yesterday.

In response, a Nasa spokesman said that ‘there are no humans on Mars’, and dispelled another rumour that the agency faked sending rovers to the red planet.

Scroll down for video 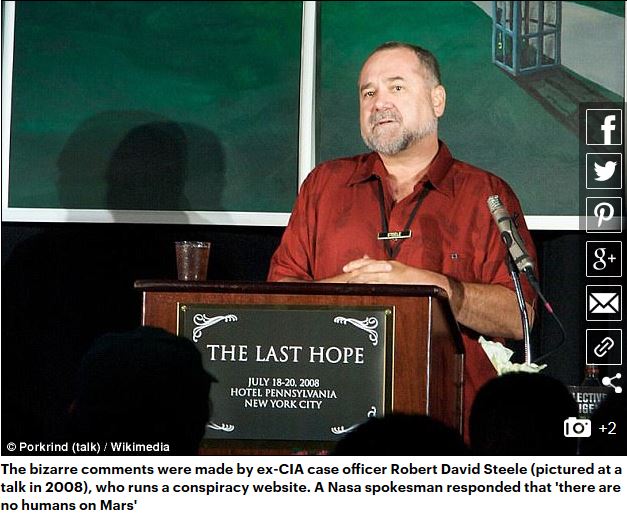 ‘But there are no humans.’

The child colony rumour surfaced on the national radio programme The Alex Jones Show, hosted by an eccentric conspiracy theorist of the same name.

Mr Jones has previously claimed that the notorious Sandy Hook shooting never happened and that the Boston bombings were a government hoax.

The bizarre Mars colony comments were made by Robert David Steele, a former CIA case officer who was a guest on this week’s programme.

Mr Steele, who runs his own conspiracy theory blog, claimed that children have been secretly shipped to Mars over the last two decades to work as slaves.

‘We actually believe that there is a colony on Mars that is populated by children who were kidnapped and sent into space on a 20-year ride,’ Mr Steele said.

‘So that once they get to Mars they have no alternative but to be slaves on the Mars colony.’Mr Jones agreed, saying ‘clearly they don’t want us looking into what is happening’ because ‘every time probes go over they turn them off.’

‘Look, I know that 90 per cent of the Nasa missions are secret and I’ve been told by high level Nasa engineers that you have no idea. There is so much stuff going on,’ he said. 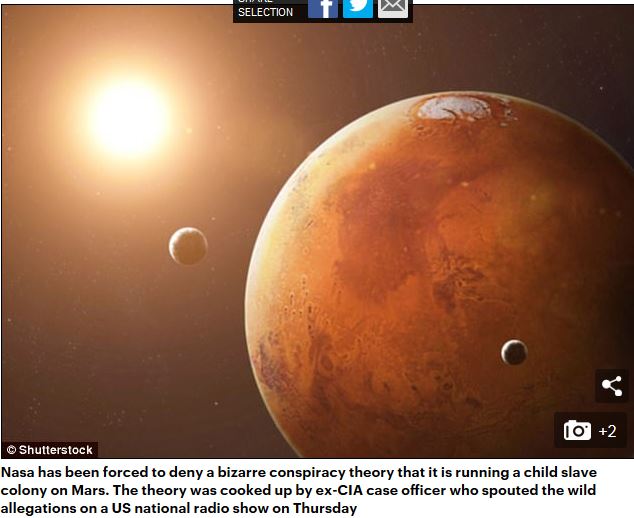 Nasa rarely comments on wild conspiracy theories, and the agency’s statement comes just days after a rumour surfaced that it was soon to announce the discovery of alien life.

MailOnline has contacted Nasa about these claims.

The hacker collective Anonymous set conspiracy theorists abuzz this week after it claimed Nasa is on the verge of announcing the discovery of alien life.

In a video, shared to an unofficial YouTube channel said to be affiliated with the vigilante group, a masked presenter cited snippets of a recent talk by Nasa Associate Administrator Dr Thomas Zurbuchen to support their prediction.

But shortly afterwards Nasa confirmed that no such announcement is on the way.

Dr Zurbuchen took to Twitter on Tuesday to assure that the reports were false, and said that we still do not know if we are alone in the universe.

‘Are we alone in the universe? While we do not know yet, we have missions moving forward that may help answer that fundamental question.’