BZ: This is a Big DOT, there is so much wondrous expansion happening.  Feel It, See It, Know It.

The Women of North and South Korea in Unity and team spirit.

North Korea’s women’s ice hockey players have arrived in South Korea to form a joint team for the Pyeongchang Olympics.

The 12 players crossed the border with an official delegation and will start training with the team from the South.

In a breakthrough deal, both countries last week agreed to field a joint team to compete under a single flag.

It marks a thaw in relations that began in the new year, when North Korea said it wanted to attend the Games.

The deal had been met with some criticism in the South, as it might mean there will be less time on the ice for the South’s players.

On Saturday, the International Olympic Committee (IOC) agreed that the 12 players could be added to the South’s full team of 23 players.

“It is a tough situation to have our team be used for political reasons, but it’s kind of something that’s bigger than ourselves right now,” Sarah Murray, the American coach of the South Korean team, told a news conference on Monday.

North Korean state media on Thursday said “all Koreans at home and abroad” should work towards unification without the help of other countries. 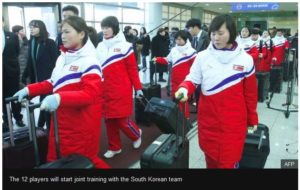