Wildlife experts only found huge mammal after following birds of prey scavenging on carcass
by Tim Wyatt, published on Independent, on February 25, 2019

Brazilian wildlife experts have been left baffled after discovering a dead humpback whale in the Amazon rainforest.

The 10-ton mammal was found in the jungle undergrowth on the island of Marajo, which sits at the mouth of the Amazon River.

Although scientists presume the enormous creature was hurled onshore during a storm, they do not understand how it came so far inland or why it was swimming off the coast in the first place.

Officials from Para state’s health, sanitation and environment department said they only found the 11m-long whale after following the birds of prey which were scavenging on its huge carcass.

The remains were deposited in such a remote part of the mangrove swamp in the Amazonian delta that it took two trips for the wildlife experts to reach the site.

Marine specialists from the Bicho D’agua Institute, a conservation group based on Marajo, are part of the team examining the whale, which is thought to have died several days before it was found.

Renata Emin, the institute’s project leader, said: “We’re still not sure how it landed here, but we’re guessing that the creature was floating close to the shore and the tide, which has been pretty considerable over the past few days, picked it up and threw it inland, into the mangrove.

“Along with this astonishing feat, we are baffled as to what a humpback whale is doing on the north coast of Brazil during February because this is a very unusual occurrence.”

Humpback whales are commonly seen further south on the Bahia coast of Brazil between August and November, but very rarely travel the thousands of kilometres north to the mouth of the Amazon.

Ms Emin said the whale is believed to be a calf which got separated from its mother while migrating back south.

Researchers said there were no clear reasons why the animal died but were starting to take samples from the carcass for further study. 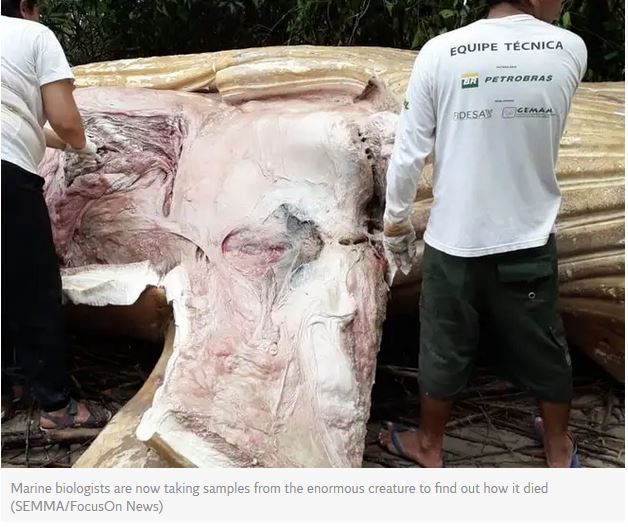 “Depending on the state of decomposition, some information may already have been lost.

“We are collecting as much information as we can get and identifying marks and wounds on its body to see if it was caught in a net or hit by a boat,” Ms Emin said.

Dirlene Silva, from the state environment department, told local television that the body of the whale would be left where it crash-landed into the jungle.

“It’s very difficult to get there and there’s no way we can send a bulldozer because it would not get through. There is no way to remove it. To get there, we need to cross the swamp.”

The skeleton of the humpback will, however, be dismantled, preserved, and then sent to a natural history museum in the city of Belem for future study.