Mysterious interstellar asteroid ‘Oumuamua could be a giant solar sail ‘sent from another civilization to look for signs of life,’ claim astronomers

Mysterious interstellar asteroid ‘Oumuamua could be a giant solar sail ‘sent from another civilization to look for signs of life,’ claim astronomers

A mysterious asteroid called Oumuamua, the first interstellar object ever seen in the solar system, could be a gigantic alien solar sail send to look for signs of life, a new study has claimed.

Astronomers from the Harvard Smithsonian Center for Astrophysics (CfA) analyzed the strange cigar shape of the object, and an unexpected boost in speed and shift in trajectory as it passed through the inner solar system last year.

They concluded that the strange asteroid ‘might be a lightsail of artificial origin.’ 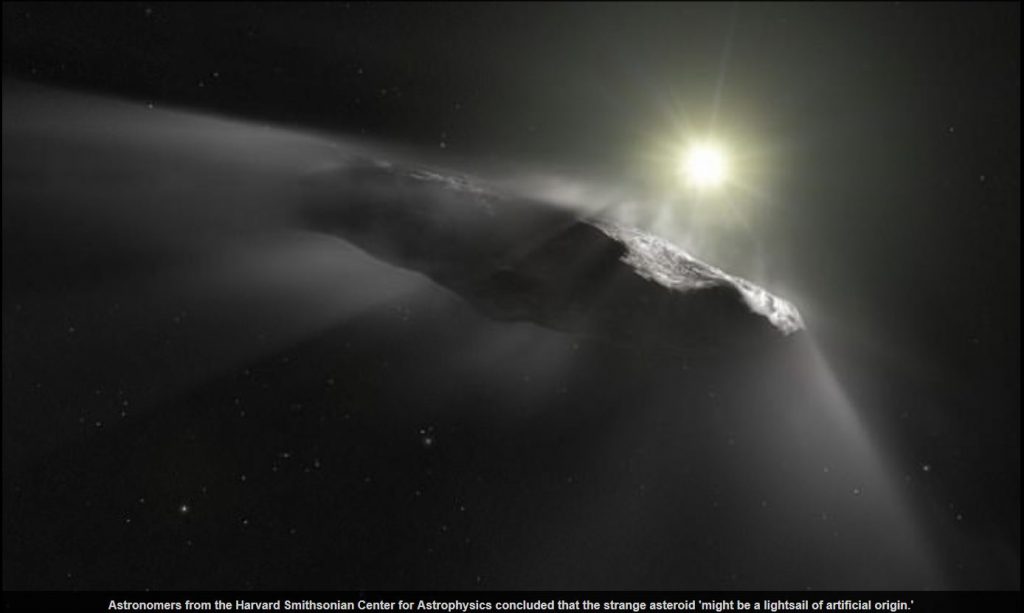 The study – ‘Could Solar Radiation Pressure Explain ‘Oumuamua’s Peculiar Acceleration?’, which recently appeared online – was conducted by Shmuel Bialy, a postdoctoral researcher at the CfA’s Institute for Theory and Computation (ITC) and Professor Abraham Loeb, the director of the ITC, the Frank B. Baird Jr. Professor of Science at Harvard University, and the head chair of the Breakthrough Starshot Advisory Committee.

The researchers say the strange acceleration could the the result of solar radiation pushing a giant solar sail.

They found a sail that was only a fraction of a millimeter thick (0.3-0.9 mm) would be sufficient for a sheet of solid material to survive the journey through the entire galaxy.

Lightsails with similar dimensions have been designed and constructed by humans, including the Japanese-designed IKAROS project and the Starshot Initiative with which he is involved.

‘Considering an artificial origin, one possibility is that ‘Oumuamua is a lightsail, floating in interstellar space as a debris from an advanced technological equipment,’ they wrote.

WHAT IS A LIGHTSAIL?

Much like the wind pushing a sailboat through water, solar sails rely on sunlight to propel vehicles through space.

Over time, the buildup of these particles provides enough thrust for a spacecraft to travel in space. 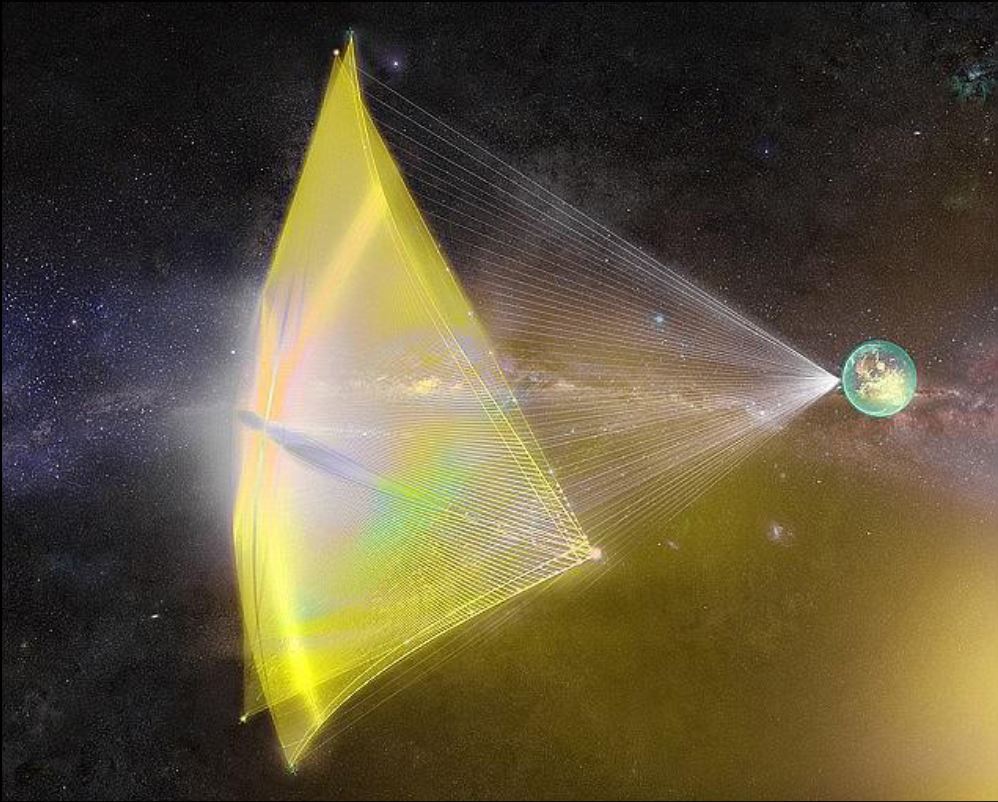 The JPL team has not yet worked out how to power the craft – and many of their ideas rely on technology that doesn’t yet exist, such as this laser sail being developed by the Breakthrough project, which hopes to make to same trip to Alpha Centairi.

‘Alternatively, a more exotic scenario is that ‘Oumuamua may be a fully operational probe sent intentionally to Earth vicinity by an alien civilization,’ they added.

Another option, which explains the lack of communication, a lack of any kind of signal could mean the giant object is actually an ‘alien shipwreck’.

Professor Loeb previously wrote in Scientific American, ‘Oumuamua could be the first known case of an artificial relic which floated into our Solar System from interstellar space.

‘This opportunity establishes a potential foundation for a new frontier of space archaeology, namely the study of relics from past civilizations in space,’

‘Finding evidence for space junk of artificial origin would provide an affirmative answer to the age-old question ‘Are we alone?’. This would have a dramatic impact on our culture and add a new cosmic perspective to the significance of human activity.’

This illustration shows ‘Oumuamua racing toward the outskirts of our solar system. As the complex rotation of the object makes it difficult to determine the exact shape, there are many models of what it could look like.

Loeb told Universe Today, ‘Oumuamua could be an active piece of alien technology that came to explore our Solar System, the same way we hope to explore Alpha Centauri using Starshot and similar technologies’

‘The alternative is to imagine that `Oumuamua was on a reconnaissance mission. The reason I contemplate the reconnaissance possibility is that the assumption that `Oumumua followed a random orbit requires the production of ~10^{15} such objects per star in our galaxy. This abundance is up to a hundred million times more than expected from the Solar System, based on a calculation that we did back in 2009. A surprisingly high overabundance, unless `Oumuamua is a targeted probe on a reconnaissance mission and not a member of a random population of objects.’

The cigar-shaped object, named ‘Oumuamua, was spotted by the Haleakala observatory in Hawaii on October 19 last year.

Its appearance and behaviour baffled scientists and led to speculation that it might even be an alien artefact – and now they have found it got a strange speed boost while passing through, which has helped identify it as a comet.

Since then, astronomers have flip-flopped between comet and asteroid for our first confirmed interstellar guest.

‘Our high-precision measurements of ′Oumuamua’s position revealed that there was something affecting its motion other than the gravitational forces of the Sun and planets,’ said Marco Micheli of ESA’s (European Space Agency) Space Situational Awareness Near-Earth Object Coordination Centre in Frascati, Italy, and lead author of a paper describing the team’s findings.

WHAT IS ‘OUMUAMUA AND WHAT DO WE KNOW ABOUT IT?

It was first spotted by a telescope in Hawaii on 19 October, and was observed 34 separate times in the following week.

It is named after the Hawaiian term for ‘scout’ or ‘messenger’ and passed the Earth at about 85 times the distance to the moon.

It was the first interstellar object seen in the solar system, and it baffled astronomers.

Initially, it was thought the object could be a comet.

However, it displays none of the classic behaviour expected of comets, such as a dusty, water-ice particle tail.

The asteroid is up to one-quarter mile (400 meters) long and highly-elongated – perhaps 10 times as long as it is wide.

That aspect ratio is greater than that of any asteroid or asteroid observed in our solar system to date.

But the asteroid’s slightly red hue — specifically pale pink — and varying brightness are remarkably similar to objects in our own solar system.

Around the size of the Gherkin skyscraper in London, some astronomers were convinced it was piloted by aliens due to the vast distance the object traveled without being destroyed – and the closeness of its journey past the Earth.

Alien hunters at SETI – the Search for Extra-terrestrial Intelligence based at Berkeley University, California said there was a possibility the rock was ‘an alien artefact’.

But scientists from Queen’s University Belfast took a good look at the object and said it appears to be an asteroid, or ‘planetesimal’ as originally thought.

Researchers believe the cigar-shaped asteroid had a ‘violent past’, after looking at the light bouncing off its surface.

They aren’t exactly sure when the violent collision took place, but they believe the lonely asteroid’s tumbling will continue for at least a billion years.

The speed boost was consistent with the behavior of a comet, said co-author Davide Farnocchia of the Center for Near Earth Object Studies (CNEOS) at NASA’s Jet Propulsion Laboratory (JPL).

‘This additional subtle force on ′Oumuamua likely is caused by jets of gaseous material expelled from its surface,’ said Farnocchia.

‘This same kind of outgassing affects the motion of many comets in our solar system.’

Comets normally eject large amounts of dust and gas when warmed by the Sun.

Karen Meech, an astronomer at the University of Hawaii’s Institute of Astronomy and co-author of the study, speculated that small dust grains, present on the surface of most comets, eroded away during ′Oumuamua’s long journey through interstellar space.

‘The more we study ′Oumuamua, the more exciting it gets,’ Meech said.

‘I’m amazed at how much we have learned from a short, intense observing campaign. I can hardly wait for the next interstellar object!’

′Oumuamua, less than half a mile in length, now is farther away from our Sun than Jupiter and traveling away from the Sun at about 70,000 mph as it heads toward the outskirts of the solar system.

In only another four years, it will pass Neptune’s orbit on its way back into interstellar space.

Because ′Oumuamua is the first interstellar object ever observed in our solar system, researchers caution that it’s difficult to draw general conclusions about this newly-discovered class of celestial bodies.

However, observations point to the possibility that other star systems regularly eject small comet-like objects and there should be more of them drifting among the stars.

Future ground- and space-based surveys could detect more of these interstellar vagabonds, providing a larger sample for scientists to analyze.