My Thank You Note to President Trump

My Thank You Note to President Trump

by Michael K. Marsh, published on Interrupting The Silence, on January 26, 2017

Mr. President, I did not vote for you and I never thought I would be saying this but I owe you a debt of gratitude. Less than a week into your presidency you have already done for me something I do not think Mrs. Clinton could have or would have done had she been elected president.

Your words and actions have inspired me. They have struck a chord deep within me. You have challenged me to be and do better. The violence in your words and actions have been a mirror before me. I do not like what I see. I do not want to be what I see. I may not have said or done many of the things you have; that, however, is not an excuse or justification for the violence that does inhabit some of my thoughts, words, and actions. In that regard, maybe we are not so different.

Regardless of what may come of the rest of your presidency, I consider it a success at least in terms of what you have done for me. You have awakened me to see more clearly the reality of violence and darkness that lives not only in America but in the human heart, my heart included. You have helped me see America’s addiction to and romance with violence – whether that violence is grounded in war, crime, poverty, economics, politics, language, discrimination, or entertainment. You have shown me that far too often violence is profitable and brings out the vote. You have reminded me that the way forward is nonviolence and nonviolent resistance. I already knew this but I now know it again, as if for the first time, and in a new way. I am grateful. Thank you. 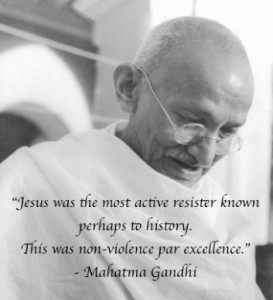 Your presidency has led me to create my own cabinet of advisers, a cabinet of nonviolence. I have chosen Fr. John Dear, Fr. Thomas Merton, Dorothy Day, Dr. Martin Luther King, Jr, and Mahatma Gandhi to advise, teach, chastise, and disarm my heart. Needless to say the Prince of Peace will head my cabinet. I am reading, listening, studying, and praying. I have chosen my way forward.

I will not do violence to you by my thoughts, words, or actions. I do not want to shame, humiliate, or harm you. I will pray for you, America, and myself.

I will not be passive. I will resist you with love and seek your good, not because I am especially fond of you but because I believe God loves you, even as God loves Muslims, immigrants and refugees, women, the disabled, and Mexicans.

I will not adjust myself to your presidency or any presidency that promotes injustice, acts with violence, speaks hatred, or denies the dignity of another human being. I will answer Dr. King’s call “to be maladjusted to such things” (A Testament of Hope, 14).

I do not yet know exactly what all this means for me or where this might take me. I trust and believe, however, that in some way “the universe is on the side of justice” (A Testament of Hope, 14, 16), and to not protest violence, speak out for justice, and resist injustice is a “crime against God” and a “betrayal of the Christian ethic of love” (The Nonviolent Alternative, 129). I want to be neither a criminal nor a traitor. I do not want that for myself, you, or America.

January 25, 2017
The Feast of the Conversion of St. Paul the Apostle

1 Comment to “ My Thank You Note to President Trump”