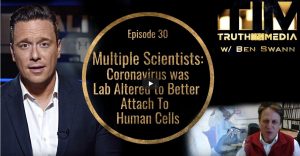 Exclusive information.  Multiple highly regarded scientists who have studied C0R0NAVlRUS say that the VlRUS has been manipulated in labs to better attach to human cells.  Turns out, research on that very thing was conducted here in the United States until the research was banned in 2013.  In 2014, the research appears to have resumed through funding to several labs in China through payments to Eco Health Alliance. We break down the timeline.