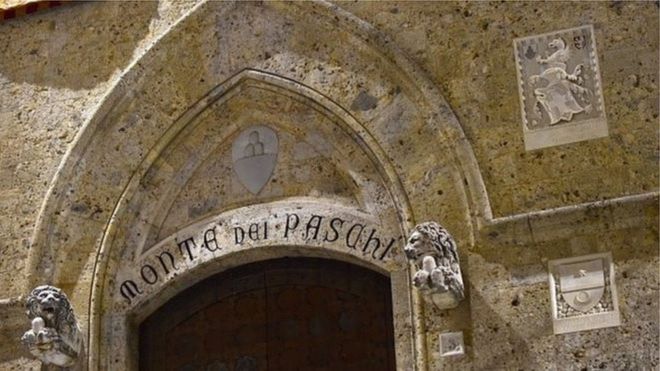 The lender is facing a capital shortfall of €8.8bn, higher than the €5bn previously estimated by the bank

Italian lender Monte dei Paschi is facing a capital shortfall of €8.8bn (£7.5bn), higher than the €5bn previously estimated by the bank, the European Central Bank has said.

It comes after Italy approved a €20bn fund to prop up its embattled banking sector on 23 December.

Monte dei Paschi had asked for a capital injection to stay afloat.

It is carrying a mountain of bad loans made to customers who cannot afford to repay them.

In a statement from the bank on Monday, it confirmed it had officially asked the ECB to go ahead with a “precautionary recapitalisation”.

This will entail a forced conversion of the bank’s junior bonds – many of which are held by small investors – into shares.

It also permits the government to buy shares or bonds on market terms endorsed by EU state aid officials.

In response, the ECB said it had calculated the capital it believed that the bank needed, based on an EU stress test of large lenders earlier this year.

Monte dei Paschi (MPS) has formally requested a bailout from the Italian government – but it is far from a done deal.

The government is trying to present the plan as a “precautionary recapitalisation” rather than a full-blown rescue. It is an important distinction under EU state aid law, which would enable it to limit the losses suffered by investors.

This matters. In Italy, large numbers of bank investors are ordinary savers, people who thought bank bonds were a safe bet for their life savings, for example. The government is trying to protect them – but if the European Commission were to interpret the rules harshly, it might not be able to.

The ECB’s conclusion that MPS needs €8.8bn to boost its reserves, as opposed to the €5bn previously being discussed, creates yet another headache. However, with €20bn already set aside by the government to support the banking sector, it shouldn’t be too painful.

The ECB also says that MPS “remains solvent”, although its liquidity position is deteriorating rapidly. That might actually help the government’s argument that the bailout is, in fact, precautionary.

It said the bank was solvent, but noted its liquidity position had “deteriorated rapidly” between 30 November and 21 December.

“The bank has quickly started talks with the competent authorities to understand the methodologies underlying the ECB’s calculations and introduce the measures for a precautionary recapitalisation,” Monte dei Paschi said.

Dr Andreas Hoepner, associate professor at the Henley Business School, told BBC Radio 4’s Today programme that trust in the bank, which now has a market capitalisation of less than €500m, had “deteriorated significantly”.

He also questioned whether enough funds would be available to other struggling banks, given that Monte dei Paschi could use up almost half of the agreed €20bn support fund.

“We hope not too many other lenders will need support, but we don’t know for sure,” he said.

“The question is, is the €20bn the full sum or might the Italian government request more at a later stage?”

Founded in 1472, Monte dei Paschi is said to be the oldest surviving bank in the world.

It failed an EU stress test in July because of billions of euros of risky loans on its books, made to clients who cannot afford to repay them.

The situation has worsened since then.

On 21 December, the bank revealed that it could run out of funds by next April, using up nearly €11bn.

Previously, it had said it had enough funds to stay afloat for 11 months.

Italy’s market watchdog said last week the bank’s shares and securities would be suspended from trading until the conditions of a state bailout became clear.