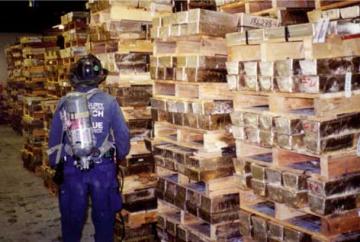 This image is found on the PBS.org website companion for the television documentary America Rebuilds under the section Uncovering Property. The page, entitled A Treasure in Silver and Gold, describes the vault as two levels of 3,000 square feet each. See the source for the full-sized image. The page credits images to Leslie E. Robertson and Associates.

This image is found on the PBS.org website companion for the television documentary America Rebuilds under the section Uncovering Property. The page, entitled A Treasure in Silver and Gold, describes the vault as two levels of 3,000 square feet each. See the source for the full-sized image. The page credits images to Leslie E. Robertson and Associates.
The basement of 4 World Trade Center housed vaults used to store gold and silver bullion. Published articles about precious metals recovered from the World Trade Center ruins in the aftermath of the attack mention less than $300 million worth of gold. All such reports appear to refer to a removal operation conducted in late October of 2001. On Nov. 1, Mayor Rudolph Giuliani announced that “more than $230 million” worth of gold and silver bars that had been stored in a bomb-proof vault had been recovered. A New York Times article contained:

Two Brinks trucks were at ground zero on Wednesday to start hauling away the $200 million in gold and silver that the Bank of Nova Scotia had stored in a vault under the trade center … A team of 30 firefighters and police officers are helping to move the metals, a task that can be measured practically down to the flake but that has been rounded off at 379,036 ounces of gold and 29,942,619 ounces of silver .. 1
Reports describing the contents of the vaults before the attack suggest that nearly $1 billion in precious metals was stored in the vaults. A figure of $650 million in a National Real Estate Investor article published after the attack is apparently based on pre-attack reports.

Unknown to most people at the time, $650 million in gold and silver was being kept in a special vault four floors beneath Four World Trade Center. 2
An article in the TimesOnline gives the following rundown of precious metals that were being stored in the WTC vault belonging to Comex. 3

Comex metals trading – 3,800 gold bars weighing 12 tonnes and worth more than $100 million
Comex clients – 800,000 ounces of gold with a value of about $220 million
Comex clients – 102 million ounces of silver, worth $430 million
Bank of Nova Scotia – $200 million of gold
The TimesOnline article is not clear as to whether the $200 million in gold reported by the Bank of Nova Scotia was part of the $220 million in gold held by Comex for clients. If so, the total is $750 million; otherwise $950 million.

There appear to be no reports of precious metals discovered between November of 2001 and the completion of excavation several months later. Assuming that the above reports described the value of precious metals in the vaults before the attack, and that the $230 million mentioned by Giuliani represented the approxmiate value of metals recovered, it would seem that at least the better part of a billion dollars worth of precious metals went missing. (It is not plausible, of course, that whatever destroyed the towers vaporized gold and silver, which are dense, inert metals that are extremely unlikely to participate in chemical reactions with other materials.)

An article in The Sierra Times suggests that gold was recovered from two trucks in a tunnel under 5 World Trade Center, giving rise to suspicions that the trucks were being used to remove the gold from the vaults before the South Tower fell. 4   However, this report may have been based on an erroneous reading of other reports that describe the removal of crushed vehicles from a tunnel under 5 WTC in order to gain access to the vaults under 4 WTC to remove their contents. 5

Why is there this huge discrepancy between the value of gold and silver reported recovered, and the value reported to have been stored in the vaults? There are a number of possible explanations, from outright theft using the attack as cover, to insurance fraud. Until there is a genuine investigation that probes all the relevant facts and circumstances surrounding the attack, we can only speculate.