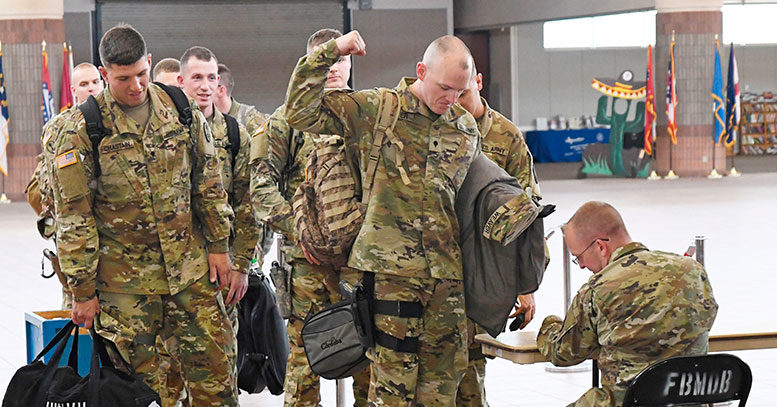 The Soldiers left from the Silas L. Copeland Arrival/Departure Airfield Control Group here after spending a month training with the 5th Armored Brigade at McGregor Range, N.M., supported by the Directorate of Plans, Training, Mobilization and Security.

While the 428th MP Co. trained for a port security mission, the “Show Me Warfighters: First to Call, Last to Fall” of the 1137th MP Co. were learning the techniques and skills of detainee operations. Because most of the Soldiers in the unit had a military occupational specialty of 31B, military police, it was new for them to be sent on a 31E, internment and resettlement specialist, mission, said 1st Lt. Crystal Cecil, executive officer of the 1137th MP Co., based in West Plains, Mo.

“This is a new mission for us, so they’ve been training up on 31E tasks,” Cecil said. “They did a 48-hour CTE (culminating training exercise) in preparation, during which they ran mock facilities. They did a phenomenal job.”

In part because of the excellent training they went through at Fort Bliss, the transition to taking on the detainee operations mission went well, Cecil said.

“The great thing about being an MP is you’re already working on your IPC (interpersonal communication) skills no matter what you’re doing as an MP,” Cecil said. “The biggest thing for the 31Es – that’s been drilled into their heads over and over – is your IPC skills. How you handle individuals and how you handle situations is really going to dictate stress levels when they get down to the facilities.”

Capt. Jonathan Holem, commander, 1137th MP Co., said the realistic mock facilities at McGregor Range, as well as the expertise of the Soldiers who trained them, had him confident his unit was ready for the mission ahead. 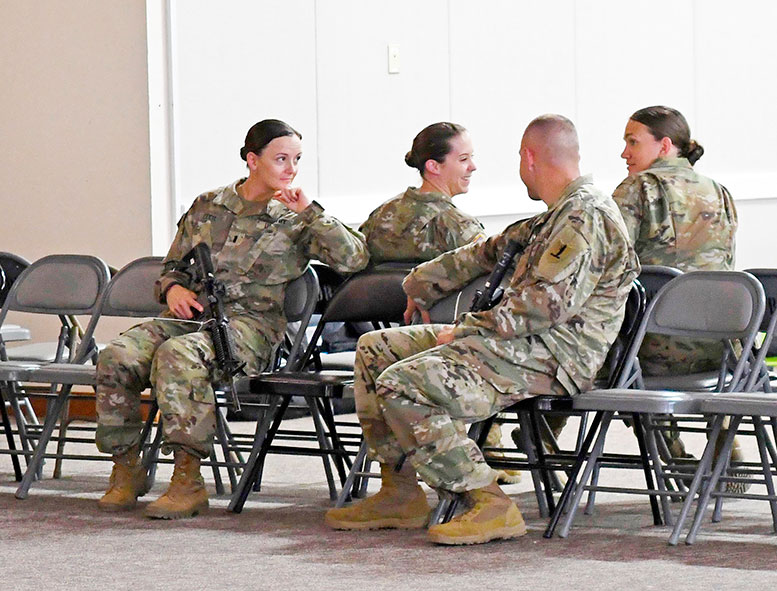 “This will be the first deployment for a lot of the younger enlisted, so this will be a life-changing event for them, I’m sure,” Holem said. “In general, the feeling is people just want to get down there and get to work, do the mission we’ve been training on for months. We’re just really proud to represent Missouri and the Military Police Corps on this deployment. I have a lot of faith in my unit. I think we’re going to do a fantastic job and come back with honor.”

“Most of our Soldiers have been to Cuba before, so they know the layout,” Ward said. “I’ve actually learned more from them for this mission. Our Soldiers are ready and excited to get going.”

The varied training the Army provides its Soldiers have made these groups of military police ready for whatever mission is thrown their way, Cecil said.

“Military police are so well-rounded and versatile,” she said. “We’ve transitioned from combat, to detainee operations, to policing, and last year we were out in Germany just doing law-and-order missions. Going over to Cuba and doing something different is a nice change of pace for us. It will enhance their skills and give them something else to put in their tool kits – something extra for their civilian side.”