Mike Pence wants to see astronauts return to the Moon

Mike Pence wants to see astronauts return to the Moon 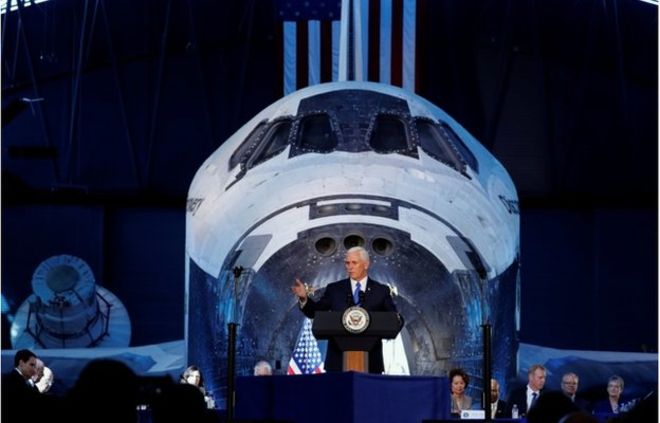 US Vice-President Mike Pence has expressed the intention for America to send humans back to the Moon’s surface.

Speaking to the National Space Council, he said Earth’s satellite would be a “stepping stone” to the wider exploration of the Solar System.

“We will return astronauts to the Moon – not only to leave behind footprints and flags, but to build the foundation we need to send Americans to Mars and beyond,” he stated.

Mr Pence said something similar when he visited the Kennedy Space Center in July, but he was less specific then about boots on the lunar soil.

It may give stronger hints to the direction of thinking that will be pursued when the Trump White House finally gets its nomination in place for Nasa administrator.

Representative Jim Bridenstine, a Republican from Oklahoma, is the Trump pick to take the job but has yet to be confirmed by the Senate. 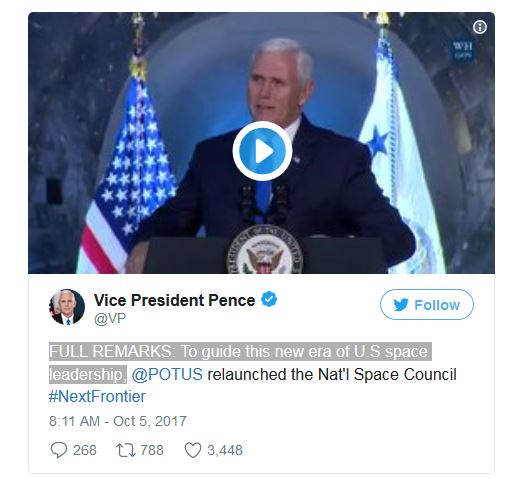 In his speech to the newly re-established advisory body (this was the first time it had convened in nearly a quarter of a century), Mr Pence said US space policy had lost its edge and needed to reassert itself.

“The president has charged us with laying the foundation for America to maintain a constant commercial human presence in low-Earth orbit. From there, we will turn our attention back toward our celestial neighbours,” he said.

The speech, delivered in front of Space Shuttle Discovery at the Smithsonian National Air and Space Museum’s Steven F Udvar-Hazy Center in Chantilly, Virginia, was backed up by an earlier op-ed in the Wall Street Journal.

But neither speech nor the newspaper article mentioned timelines or funding numbers.

President Obama had rejected the Moon as a return destination.

“We’ve been there,” he said bluntly, and told Nasa to take a more direct route to the Red Planet, setting the ambition to “send humans to orbit Mars and return them safely to Earth” by the mid-2030s.

He approved the development of a big new rocket, the Space Launch System, and a deep space capsule called Orion. All of this hardware is still some years away from carrying people.

A project to use the systems, when they became available, to visit and capture a small asteroid, was promptly dropped when Donald Trump became president.

Instead, Nasa has recently started looking at the feasibility of building some kind of lunar space station that it refers to as the Deep Space Gateway.

This would be a testing ground for astronauts and their equipment as they move away from Earth and the low-orbiting International Space Station.

International partners, such as Russia, Europe and Canada, have been asked to think about the technologies they could contribute.

Nasa’s acting administrator, Robert Lightfoot, issued a statement later on Thursday, which read: “Nasa has been directed to develop a plan for an innovative and sustainable programme of exploration with commercial and international partners to enable human expansion across the Solar System, returning humans to the Moon for long-term exploration and utilisation, followed by human missions to Mars and other destinations.”

Speaking last week at the International Astronautical Congress in Adelaide, Australia, the US rocket entrepreneur Elon Musk said he hoped to send humans to Mars stating in 2024.

The SpaceX company’s CEO and chief designer has plans for a rocket that is even bigger than the SLS. This behemoth, which he says could carry 100 people, is dubbed the BFR, or “Big Falcon Rocket”.

The last astronaut mission to the Moon was Apollo 17, which saw Eugene Cernan and Harrison Schmitt spend 75 hours on the lunar surface. With budgets tightening, Nasa was instructed by then US president Richard Nixon to direct its future efforts away from the Moon to the Skylab space station and the development of the shuttle. 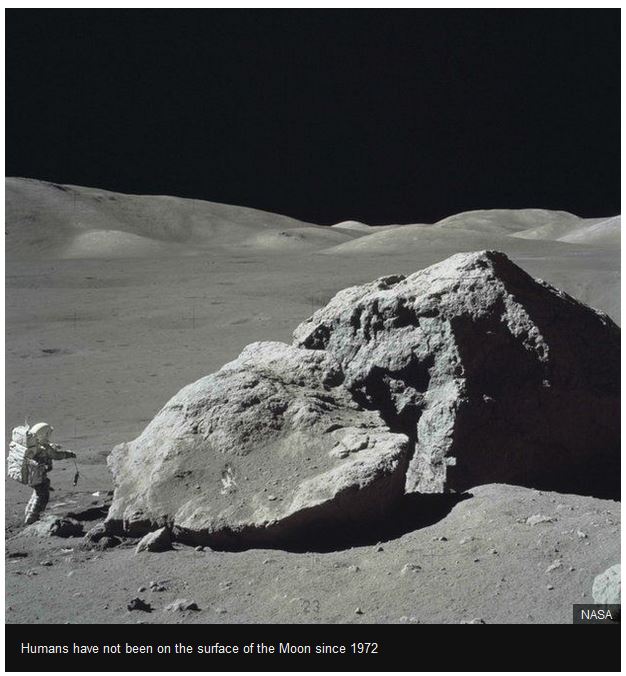