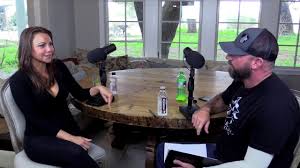 To say this episode was humbling is a gross understatement. 6 years ago, Lara Logan interviewed me in my living room for a 60 minutes piece. In a twist of amazing fate, and almost 6 years to the day, I had the incredible opportunity to interview her in her living room in similar fashion. Like you’ve never heard or seen her before, she shares her amazing journey and career as a world renowned journalist for some of the biggest news agencies in the world, in some of the most dangerous places on earth. The bravery and courage she shows in this interview sharing details of being in war zones as well as being sexually assaulted in Egypt is impossible to overstate. Sit back and enter the world of one of the most badass women to ever grace the news world for an amazing compilation of stories.

Visually, anyone who’s ever been to Israel and been to the Wailing Wall has seen that the women have this tiny little spot in front of the wall to pray, and the rest of the wall is for the men. To me, that’s a great representation of the American media, is that in this tiny little corner where the women pray you’ve got Breitbart and Fox News and a few others, and from there on, you have CBS, ABC, NBC, Huffington Post, Politico, whatever, right? All of them. And that’s a problem for me, because even if it was reversed, if it was vastly mostly on the right, that would also be a problem for me.

News media homogeneity cripples many people’s desire for getting to the truth about political goings on, determined Logan:

One ideological perspective on everything never leads to an open free diverse tolerant society. The more opinions and views … of everything that you have, the better off we all are. So creating one ideological position on everything throughout your universities, throughout academia, in school and college, in media, and everywhere else, that’s what concerns me. I don’t have to agree with everybody.

Logan added, “Although the media has historically always been left-leaning, we’ve abandoned our pretense — or at least the effort — to be objective, today. … We’ve become political activists, and some could argue propagandists, and there’s some merit to that.”

Logan cast Breitbart News as a useful barometer of “the other side” of news media:

This is the problem that I have. There’s one Fox, and there’s many, many, many more organizations on the left. … The problem is the weight of all these organizations on one side of the political spectrum. When you turn on your computer, or you walk past the TV, or you see a newspaper headline in the grocery store If they’re all saying the same thing, the weight of that convinces you that it’s true. You don’t question it, because everyone is saying it. Unless you seek out Breitbart on your computer, you’re probably not even going to know what the other side is saying.

Most news media outlets ignore the origins  of ostensibly grassroots political activism, stated Logan. She pondered the geneses of such campaigns, speculating on technology firms’ roles in amplifying such campaigns:

People were manipulated into doing that. … Who’s behind it? Who’s doing it, and why are they doing it? And what else are they doing? Those things are profoundly significant, and we’re not even trying to find out who it is. That really bothers me.

“Responsibility for fake news begins with us,” said Logan, referring to journalists and reporters.

Logan recalled that Media Matters for America (MMFA) targeted her following a 60 Minutes report she filed related to the September 11, 2012, Islamic terrorist attack on the U.S. diplomatic compound in Benghazi, Libya. “I made one comment about Benghazi,” remarked Logan, “[Then] I was targeted by Media Matters for America, which was an organization established by David Brock, who has dedicated himself to the Clintons. It was their known propaganda organization.”

In February of 2011, Logan was sexually assaulted — and nearly murdered — by numerous men in Cairo, Egypt, while reporting on the ousting of then-Egyptian President Hosni Mubarak. She shared some details of the attack’s nature.

“Piece by piece, they tore all my clothing off, and just tore my body almost to pieces, and tore my insides apart,” recounted Logan. “I saw people taking pictures. … I remember fighting, being raped, and being able to sometimes push people away, and then I remember just realizing that there were too many of them — and it was over and over and over again — and that there was always someone else when you could fight one person.”

Towards the end of the interview, Logan quipped, “This interview is professional suicide for me.”