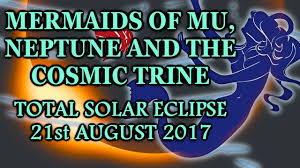 Currently in your time period, August 2017, you are in a most ‘auspicious time’ if you will. This is the time period we refer to as ‘The Emerald Gateway’ that encompasses a full moon/lunar eclipse, followed by the Lion’s Gate into a Total Solar Eclipse on August 21st 2017. The Mermaid is a most appropriate symbol for this time period. Channelled, written and narrated by Magenta Pixie. Video compiled by Catzmagick using royalty free media.