By John Solomon,  Opinion Contributor, The Hill, published on July 6, 2018 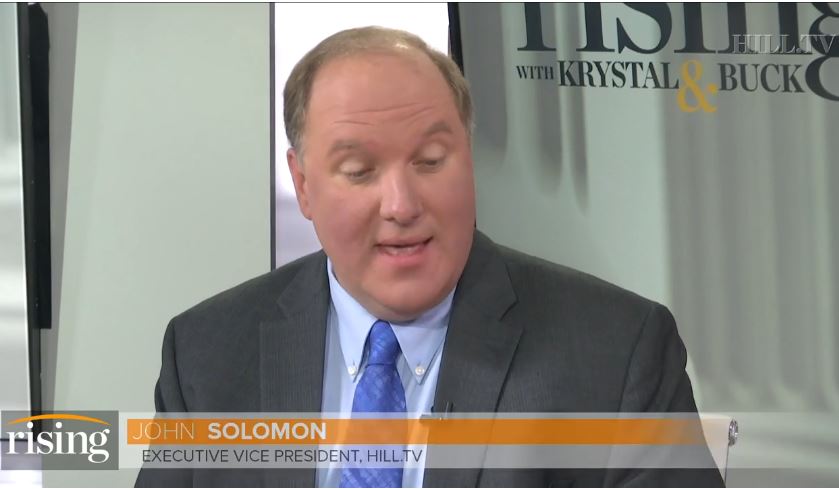 We already know from FBI counterintelligence agent Peter Strzok’s now-infamous text messages with his fellow agent and reported lover, Lisa Page, that Strzok — the man driving that Russia collusion investigation — disdained Donald Trump and expressed willingness to use his law enforcement powers to “stop” the Republican from becoming president.

The question that lingers, unanswered: Did those sentiments affect official actions?

Memos the FBI is now producing to the Department of Justice (DOJ) inspector general and multiple Senate and House committees offer what sources involved in the production, review or investigation describe to me as “damning” or “troubling” evidence.

They show Strzok and his counterintelligence team rushing in the fall of 2016 to find “derogatory” information from informants or a “pretext” to accelerate the probe and get a surveillance warrant on figures tied to the future president.

One of those figures was Carter Page, an academic and an energy consultant from New York; he was briefly a volunteer foreign policy adviser for the GOP nominee’s campaign and visited Moscow the summer before the election.

The memos show Strzok, Lisa Page and others in counterintelligence monitored news articles in September 2016 that quoted a law enforcement source as saying the FBI was investigating Carter Page’s travel to Moscow.

The FBI team pounced on what it saw as an opportunity as soon as Page wrote a letter to then-FBI Director James Comey complaining about the “completely false” leak.

“At a minimum, the letter provides us a pretext to interview,” Strzok wrote to Lisa Page on Sept. 26, 2016.

Within weeks, that “pretext” — often a synonym for an excuse — had been upsized to a Foreign Intelligence Surveillance Act (FISA) court warrant, giving the FBI the ability to use some of its most awesome powers to monitor Carter Page and his activities.

To date, the former Trump adviser has been accused of no wrongdoing despite being subjected to nearly a year of surveillance.

Some internal memos detail the pressure being applied by the FBI to DOJ prosecutors to get the warrant on Carter Page buttoned up before Election Day.

In one email exchange with the subject line “Crossfire FISA,” Strzok and Lisa Page discussed talking points to get then-FBI Deputy Director Andrew McCabe to persuade a high-ranking DOJ official to sign off on the warrant.

“Crossfire Hurricane” was one of the code names for four separate investigations the FBI conducted related to Russia matters in the 2016 election.

“At a minimum, that keeps the hurry the F up pressure on him,” Strzok emailed Page on Oct. 14, 2016, less than four weeks before Election Day.

Four days later the same team was emailing about rushing to get approval for another FISA warrant for another Russia-related investigation code-named “Dragon.”

“Still an expedite?” one of the emails beckoned, as the FBI tried to meet the requirements of a process known as a Woods review before a FISA warrant can be approved by the courts.

“Any idea what time he can have it woods-ed by?” Strzok asked Page. “I know it’s not going to matter because DOJ is going to take the time DOJ wants to take. I just don’t want this waiting on us at all.”

Until all the interviews are completed by Congress and DOJ’s inspector general later this year, we won’t know why counterintelligence agents who normally take a methodical approach to investigation felt so much pressure days before the election on this case.

Were they concerned about losing a chance to gather evidence at a critical moment? Or maybe, as some Republicans long have suspected, they wanted to impact the election?

The agents got the Carter Page warrant in October and, within two weeks, Democrats in Congress such as then-Sen. Harry Reid (Nev.) and some media members were raising questions about the FBI withholding word of a probe that could hurt Trump. FBI agents monitored those reports, too.

The day after Trump’s surprising win on Nov. 9, 2016, the FBI counterintelligence team engaged in a new mission, bluntly described in another string of emails prompted by another news leak.

“We need ALL of their names to scrub, and we should give them ours for the same purpose,” Strzok emailed Page on Nov. 10, 2016, citing a Daily Beast article about some of former Trump campaign chairman Paul Manafort’s allegedly unsavory ties overseas.

“Andy didn’t get any others,” Page wrote back, apparently indicating McCabe didn’t have names to add to the “scrub.”

“That’s what Bill said,” Strzok wrote back, apparently referring to then-FBI chief of counterintelligence William Priestap. “I suggested we need to exchange our entire lists as we each have potential derogatory CI info the other doesn’t.” CI is short for confidential informants.

It’s an extraordinary exchange, if for no other reason than this: The very day after Trump wins the presidency, some top FBI officials are involved in the sort of gum-shoeing normally reserved for field agents, and their goal is to find derogatory information about someone who had worked for the president-elect.

As the president-elect geared up to take over, the FBI made another move that has captured investigators’ attention: It named an executive with expertise in the FBI’s most sensitive surveillance equipment to be a liaison to the Trump transition.

On its face, that seems odd; technical surveillance nerds aren’t normally the first picks for plum political assignments. Even odder, the FBI counterintelligence team running the Russia-Trump collusion probe seemed to have an interest in the appointment.

These and other documents are still being disseminated to various oversight bodies in Congress, and more revelations are certain to occur.

Yet, now, irrefutable proof exists that agents sought to create pressure to get “derogatory” information and a “pretext” to interview people close to a future president they didn’t like.

Clear evidence also exists that an investigation into still-unproven collusion between a foreign power and a U.S. presidential candidate was driven less by secret information from Moscow and more by politically tainted media leaks.

And that means the dots between expressions of political bias and official actions just got a little more connected.

John Solomon is an award-winning investigative journalist whose work over the years has exposed U.S. and FBI intelligence failures before the Sept. 11 attacks, federal scientists’ misuse of foster children and veterans in drug experiments, and numerous cases of political corruption. He is The Hill’s executive vice president for video.

The views expressed by contributors are their own and not the view of The Hill.