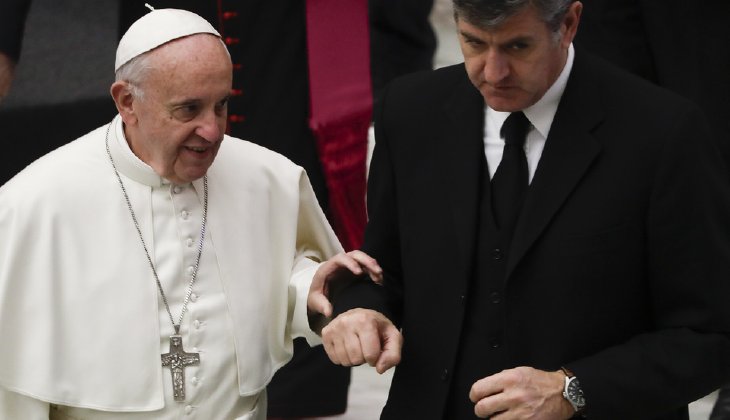 BZ: when you are done reading this have a look at actual text of what Pope Said compared with top media outlet’s headlines: Click Here

The press’ crusade against the spread of fake news is not going well.

Newsrooms were set abuzz Wednesday morning after a Belgian Catholic weekly published an interview in which Pope Francis supposedly condemned “fake news” as a sin. Ironically enough, the pope didn’t quite do this, meaning the press pushed a bogus story claiming Francis had condemned bogus stories.

Here is exactly what the pope said, according to a translation provided by the Vatican’s press office:

The communications media have a very great responsibility. Nowadays they have in their hands the possibility and the capacity to form opinion: they can form a good or a bad opinion. The means of communication are the builders of a society. In and of themselves, they are made to build, to interchange, to fraternise, to make us think, to educate. In themselves they are positive. It is obvious that, given that we are all sinners, also the media can – we who use the media, I am using a means of communication here – become harmful. And the communications media have their temptations.

They can be tempted by calumny, and therefore used to slander, to sully people, especially in the world of politics. They can be used as a means of defamation: every person has the right to a good reputation, but perhaps in their previous life, or ten years ago, they had a problem with justice, or a problem in their family life, and bringing this to light is serious and harmful; it can annul a person. In slander we tell a lie about a person; in defamation, we leak a document, as we say in Argentina, “Se hace un carpetazo” – and we uncover something that is true, but already in the past, and which has already been paid for with a jail sentence, with a fine, or whatever. There is no right to this. This is a sin and it is harmful.

Disinformation is probably the greatest damage that the media can do, as opinion is guided in one direction, neglecting the other part of the truth. And then, I believe that the media should be very clear, very transparent, and not fall prey – without offence, please – to the sickness of coprophilia, which is always wanting to communicate scandal, to communicate ugly things, even though they may be true. And since people have a tendency towards the sickness of coprophagia, it can do great harm. Thus, I would say that there are these four temptations. But they are builders of opinion and can construct, and do immense good, immense.

Not exactly extraordinary stuff, considering the source. (Though, to be fair, Francis’ reference to coprophagia is indeed newsworthy. But that came secondary Wednesday morning to media’s chief focus on fake news).

Yet, despite that what he said amounted to little more than a reiteration of a long-held belief, this is the headline that Reuters went with: “Pope warns media over ‘sin’ of spreading fake news, smearing politicians.”

The Hill went with: “Pope Francis: Spreading fake news is a sin.”

The Independent took the supposed story in a much weirder direction, and went with a headline that read, “Fake news is like getting sexually aroused by eating faeces, Pope says.”

The Reuters headline that started it all Wednesday morning is most certainly intended to give the reader the impression that the Holy Father had indeed weighed in on the controversy surrounding the prevalence of fake news on social media and its effect on the 2016 U.S. election.

In case there was any doubt that this was Reuters’ intention, the article’s closing paragraph makes it clear that the story was written with the presidential election in mind: “The pope’s comments on disinformation followed widespread debate in the United States over whether fake news on the internet might have swayed voters toward Republican candidate Donald Trump.”

I’m going to beat this drum until I’m old and gray: Media can best defeat the scourge of fake news by re-establishing their own credibility. Until then, and until major newsrooms resist the urge to publish sensational reports based on remarks that have been badly twisted out of context, nothing is going to change.

Audiences will continue to seek out non-mainstream sources for news information, media brand names will go on being ignored as untrustworthy and grifters will continue to take advantage of the credibility gap.