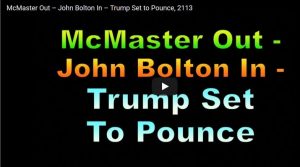 Good morning, I’m still reporting on: McMaster Out – John Bolton In – Trump Set to Pounce, 2113 Synopsis: One day after the President and chief of staff John Kelley fumed publicly about who leaked the contents of the TOP SECRET Presidential Daily Brief – or FDB – which advised Trump not to congratulate President Putin on his recent re-election win in Russia, Trump sacked the #1 suspect for that leak, HR McMaster, from his position as National Security Advisor. First of all, President Trump was absolutely right to call any head of state to congratulate them on an election victory – especially the president of the second-most powerful nuclearized nation, Russia. In fact, he could be rightly be criticized as amateurish had he not made that call. I’ve suspected McMaster as a traitor since the first day I set eyes on him. But I also know why Trump took him in – a combination of holding your enemies close to you where they can’t do as much harm to you because they too are in the spotlight – and secondly, Trump needed to fool the deep state that he had bought into their deceptions for a time while he gathered sufficient strength to mount an overwhelming and totally destructive offensive. That time has now come. Robert Mueller’s past is about to catch up with him, big time. Ole Briar Trump was jus playin’ dumb – while gathering steam. Now, he is purging the last of the most dangerous enemies still inside the White House, and in bringing in Bolton and Joe DiGenova and his wife, Victoria Toensing, he has now assembled the final pieces of his premier battle staff to rout out Deep State traitors and not just destroy them, but display their deeds for all history to see. Trump now has the American people behind him and the wind at his back and is prepared to pounce.