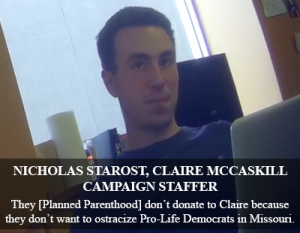 Project Veritas Action Fund has released a fourth undercover video from campaigns during this 2018 election season. This is the second report featuring staff from incumbent Senator Claire McCaskill’s campaign. It exposes how McCaskill contributions from Planned Parenthood are delivered indirectly in order to not alienate moderate or pro-life voters.

2. From the web: https://t.co/4VlCUbUIaq "EMILY's List is an American political action committee that aims to help elect pro-choice Democratic female candidates to office. It was founded by Ellen Malcolm in 1985. According to the Washington Examiner" (cont)

4. Not only is Claire McCaskill a RECIPIENT of funds from this PAC, she is also giving THEM money! You will also see Sinema and Brock run ACTBlue on the list. pic.twitter.com/8GTi4Hn3uu

6. I started poking around her FEC filings and got mildly nauseous, so will stop for now, but it is true that Emily's List, which is a PP cutout is absolutely donating funds to McCaskill… This was SO EASY to find. We should be doing more of this.